God TV folded like a cheap accordion so fast my head spun... 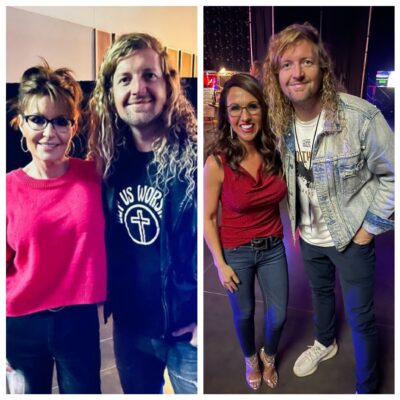 Well that didn't take long. On Friday we reported on the kerfuffle between God TV and Bethel's latest dominionist heretic, Sean Feucht. For background, Sean Feucht was a Bethel worship leader who used the pandemic to both launch a political career and travel the country doing faux-revival concerts in the most inappropriate of venues, such as the aftermath of the George Floyd murder. During that year, Feucht's ministry went from earning around $200,000 to over 5.3 million dollars. If you were curious, he is the only employee of his ministry. Not a bad first grift but what do you expect since he has been trained by Bill Johnson? He actually parlayed this into a failed bid for Congress, where he ran on a platform of criticizing the government for trying to stop the spread of COVID. He is the huckster the bible warns us about. He is the hireling the bible warns us about. He is apostate through and through.

That brings us to God TV, who is just as apostate. Just looking at the TV lineup for today, God TV will be showing, Creflo Dollar, Joyce Meyer, Andrew Wommack, Joseph Prince, Sid Roth, Dr. Michael Brown, Kenneth Copeland, John Hagee, and Benny Hinn. That is just one day! This is a who's who of apostate false teachers! This is why it was stunning to see God TV correctly stand for the word of God against Sean Feucht last week. It all started when Sean retweeted a message from Florida Governor, Ron DeSantis. Now, DeSantis is no Christian. He is however a ruthless politician who desires to be president and knows he cannot get there without co-opting the Christian vote. So, he tweeted the following nonsense:

Beloved, at first blush this may seem harmless, but it is not. God specifically tells us in multiple places in the bible that we are not to change the word of God either by deletion, addition or replacement. DeSantis reference an important set of scriptures designed to teach believers the importance of the armor of God for standing against the enemy! For the politically confused, the "left" is not our enemy. People whom political forces try to convince us are "woke" are not our enemy. The flaming arrows are lies from the devil, not Joe Biden. The shield of faith grants us faith in the word of God to stand against the lies of Satan. You cannot trivialize it to mean protection from people who dare to have a different political opinion than yours. It undermines the entire point God has here! God TV had enough and drew the line at rewriting the word of God by calling out Sean Feucht:

As spot on as God TV was for the charge of blasphemy, you could tell they did not really want to do this. This "rebuke" was littered with touchy-feely language. Perhaps Sean didn't realize. They went on to brag about Sean and the work he does so it was expected that God TV would cave, especially after Sean's "response."

"It's time to tell the truth about some people in the church. They are desperate to be liked by the left despite everything they have said about Christians. They call us bigots, racists, etc." and some, like GOD TV, want to apologize. They have gone full woke. They don't have the guts to be honest about what some crazy politicians want to do to our country." - Sean Feucht

So, God TV goes from apostate partner to woke scourge against the church in a hot minute. Of course, God TV never asked for Feucht to apologize for these manufactured offenses, just for the blasphemous retweet. You remember the tweet, don't you? Feucht quickly swept it to the side to pretend this was about some imagined, larger cultural war. Only the devil can convince the church that their enemy are the people who may need the gospel the most.

By the time I had published the first devotional on this major development of one branch of the apostate church rebuking another, God TV had apologized. After all, you have to know what side your bread is buttered on. God TV only stands to make money by promoting Sean Feucht, not criticizing him. So, despite Sean calling God TV "woke", they caved so fast it made my head spin:

"Please accept our sincere apology for our post on Sunday Aug 21st which was never intended to be seen as an attack on Sean Feucht or on Governor Ron DeSantis. The intention of our post and the results of the post were certainly not the same, and we sincerely regret any hurt, confusion or offense that this may have caused. We love both Sean Feucht and Governor Ron DeSantis and pray for everyone who is calling America back to God." - God TV

What a Kumbaya moment! It is a moment of clarity when an entity responsible for sharing some of the most egregious false teachers on the planet teams up with someone who just scammed a 31,000% pay increase by fleecing God's flock. The devil must be rejoicing. Beloved this is not rocket science. Ron DeSantis tweeted what amounts to blasphemy, radically changing the word of God to fit his carnal politics. I do not blame him because he is a politician. Sean Feucht pretends to represent Jesus Christ and yet he retweeted this abomination because it fit his new political image he is crafting and making so much money from. These facts have not changed. God TV was right to call Feucht out originally and wrong to apologize. The apology however, only got worse as it wore on:

"Additionally, this post has resulted in some accusations that we have compromised our mission and have become a woke left-wing network but rest assured, that we at GOD TV understand very well that there is intense spiritual warfare taking place all across America and the world, and recognize the deep political issues that we are fighting against. More importantly, we also recognize that revival and godly repentance is the only solution to America's apostate condition and pray for righteousness to prevail and for unity in the body of Christ." - God TV

In this one small paragraph lies the primary heresy found in dominionism. America cannot be "apostate." In order to be apostate, one must have been with God and chosen to walk away from Him. The dominionist teaching is that America was actually under covenant with God, a historical absurdity. Freudian psychology would call this "projection" as God TV is projecting their own foibles as part of the apostate church upon America. I just love the insanity of anyone seriously considering a network that houses every brand of false teaching from Creflo Dollar to Joyce Meyer as being "woke" or "left wing." Their pathetic apology mercifully concludes:

"In the meantime, please be assured of our continued commitment to the mandate the Lord gave to us which is Souls, Israel and Revival. (S.I.R). Our mission is to broadcast the good news of Jesus Christ to hearts and homes across the world with the desire to see people from every tribe and nation come to faith in Jesus Christ. We are also called to be watchmen on the walls of Jerusalem, interceding for her and praying for her and sharing the good news of Messiah Yeshua/Jesus to the Jewish people. Once again, we sincerely regret any hurt, confusion or offense this post may have caused. Yours in Messiah." - God TV

Sharing Creflo Dollar's greasy grace is not sharing the gospel of Jesus Christ. Neither is sharing the word faith heresies of Joyce Meyer. Joseph Prince? Kenneth Copeland? You are not being watchmen on the wall while promoting these charlatans. Calling Jesus, Yeshua, while simultaneously promoting Benny Hinn, does not make you anymore spiritual. As for Sean Feucht? He couldn't be happier! He got into a national fight with a major player and slapped them in the face publicly to force an apology! He answered their apology by assuring us all that dominionists could once again sleep tight at night:

"Good on @GODTV for making an apology. Thank you! The debate we had this week is critical, and for some it can be uncomfortable. But I for one am not going to be silent."

Debate? Is that what Sean Feucht calls what he did? Debate? God TV correctly called him a blasphemer to which San Feucht responded by calling them names, akin to how a fifth grader would respond. God TV did not like being called names so they self-flagellated and apologized profusely. To Sean, that is debate, right. The truly sad thing is that he signs off by insisting that he will not be quiet and why would he be? After castigating God TV back to the Stone Age, why would he? He has 5.3 million reasons to not change his course and now he has public approval from the apostate church to go with it. Make no mistake about it. Sean Feucht learned the false gospel from Bethel Church and as the key verses remind us, let anyone who preaches another gospel be accursed! Sean Feucht has partnered with this world because he worships this world. Why wouldn't he? After all, he just bought two new stunning houses with the money he grifted from people seeking God. God TV on the other hand is worse because although they support some of the worst heretics on the planet they had a shot this past week of landing on the right side of this story. Then they did the math and realized they better apologize or lose their market share of Christians seeking false teaching. For this very brief window in time, the remnant of discerning believers watched in joyful amazement as the apostate church rebuked the apostate church. Then we blinked.

Move along. Nothing more to see here"