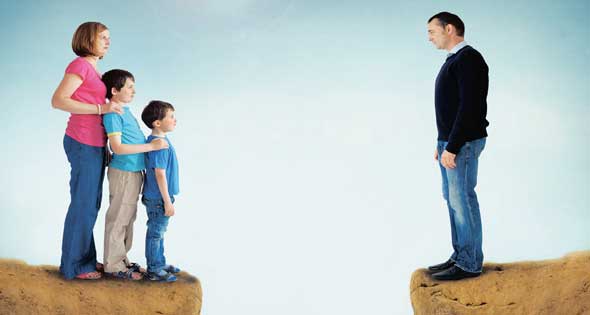 "It was also said, 'Whoever divorces his wife, let him give her a certificate of divorce.' But I say to you that everyone who divorces his wife, except on the ground of sexual immorality, makes her commit adultery, and whoever marries a divorced woman commits adultery. -- Matthew 5:31-32 (ESV)

Beloved, this is not a subject that brings anyone any joy. I would just as soon see what Jennifer Leclaire is up to now but it is not responsible to ignore difficult subjects when people do genuinely want to hear what sayeth the Lord; especially on controversial issues. One of the unspoken of sins in the church is spousal abuse or domestic violence. Mega churches like Matt Chandler's were even caught up in poor teachings to battered women recently. I believe a woman came for spiritual guidance and on some level was sent back to her abuser. I think we can all agree that this was a mistake and Chandler agreed as well. It is not biblical that a woman should stay in an abusive situation. While we always would pray for restoration and forgiveness none of that can occur without repentance first of the abuser. While I would imagine most would agree with this the Assemblies of God has now taken this to unbiblical levels at their General Council this past week. The AG has now allowed abuse as a rationale for divorce and permissible remarriage. Let us reason together through a very difficult subject and try to keep our eye on what God says.

"Over 22,000 people gathered for the 58th Assemblies of God (AG) General Council in the Orange County Convention Center in Orlando, Florida. The Council passed 22 resolutions, including one allowing those who divorce their spouses due to domestic violence to serve in ministry leadership. The resolution, in part, states: WHEREAS, Many spouses who leave a violent spouse (with or without children) are running for their lives from someone who has literally become an oppressor and enemy. David and others in Scripture fled for their lives and prayed for God to deliver them from the hands of their enemies. That is justified when one's life or children's lives are endangered; and" -- AG Resolution

I am sorry but this is an inane comparison. David was not running from a spouse but from King Saul. Many women are not running for their lives either. The line being drawn however is that because David ran for his life and some abused women are running for their lives, it now must be biblically acceptable to allow a woman to divorce, remarry and stay in ministerial leadership. I might add that this is the one area I do not believe you will find disagreement in. An abused woman is not biblically bound to stay with her abuser. The church would be better served reaching out to the husband, if a believer, for intervention and counseling as well as following any applicable laws.

"WHEREAS, This confluence of verses and overarching biblical themes validate this exception for approving a divorce with The General Council of the Assemblies of God; and" -- AG Resolution

Huh? What confluence of verses and overarching biblical themes? All you said was David ran for his life! There has been no proof offered or even a rationale for divorce. I think it might be a good time to remind everyone that God hates divorce. Period. Full Stop. Even those that have good cause from infidelity; God hates their divorce as well. Why? Because marriage is a covenant relationship between you and God first and then you and your spouse.

"WHEREAS, A confluence of several verses and overarching biblical themes validate the exception of ecclesiastical annulment which the church has instituted by approving the divorce of those who have been deceived or defrauded by their spouse; and WHEREAS, The use of the ecclesiastical annulment has not lessened the need for the applicant to have a divine call, solid integrity, sound doctrine and fullness of the Spirit; The AG's former bylaw allowed people to receive ministerial credentials with the denomination if they divorced their spouse prior to conversion or if they divorced their spouse for marital unfaithfulness. The amended bylaw now includes divorce due to "domestic violence by a spouse to a spouse or child." -- AG Resolution

So essentially here the AG is amending their current policy regarding who can qualify for leadership. Mind you, if they adhered to the biblical standard of not allowing women to preach with authority over men we would not find ourselves in this new mess today. The old standard included if the divorce occurred prior to salvation and for marital unfaithfulness, both of which are biblically supported. Now they will add an exception for those who divorced due to domestic violence by a spouse to a spouse or to a child. Wait a second. So now if the abuser is abusive to the children, the woman also has a biblical exception?

"AG Pastor Kelly Delp praised the Council for speaking up in defense of women: Just watched men at the @ag_usa General Council line up to speak against domestic violence and to add divorce due to domestic violence to our bylaws as a biblically permissible divorce standard, allowing for victims to remarry and retain ministerial credentials." -- Kelly Delp

Beloved, I am all for lining up to speak against domestic violence and in defense of women. What I am not all for is pretending that the egregious sins of man changes God in any form or fashion. We start with the biblical truth that God hates divorce and I would hope all would agree. With that, Jesus spoke about this one time, in the key verses above. He is as clear as the Father. These verses are often used as a get out of marriage free card but the allowance is very limited and the true subject is adultery, not marriage. Jesus teaches that EVERYONE who divorces except for marital infidelity and remarries, commits adultery and makes their new spouse an adulterer. While Jesus makes it very plain that there is an exception for sexual immorality, there is no exception for abusive situations.

So let me be clear. The Assemblies can do whatever they want with their organization. They have left sound orthodoxy years ago and are fast growing within the apostate church today. Next year they are co-promoting and organizing an international event with heretic Bill Johnson. The real problem is who decides if someone can remarry? According to scripture, this organization is now encouraging women to get divorced, which God hates and to remarry, which God does not permit. The end result is adultery. That is some dangerous ground to be on. Like I have said, we do not wish to ever have to discuss this subject but when we do, we should at least stick to the inerrant word of God.

Credentialed Minister of the Gospel for the Assemblies of God. Owner and founder of 828 ministries. Vice President for Goodwill Industries. Always remember that in all things God works for the good of those who love Him and are called according to (more...)
Related Topic(s): Fashion, Add Tags
Add to My Group(s)
Go To Commenting
The views expressed herein are the sole responsibility of the author and do not necessarily reflect those of this website or its editors.