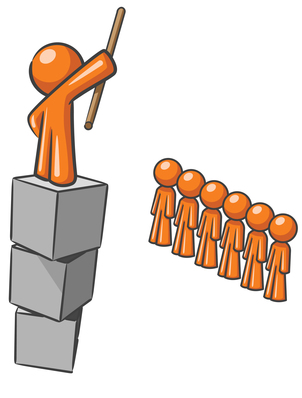 And the Lord said to him, "Now you Pharisees cleanse the outside of the cup and of the dish, but inside you are full of greed and wickedness. You fools! Did not he who made the outside make the inside also? But give as alms those things that are within, and behold, everything is clean for you. -- Luke 11:39-41 (ESV)

One of the least discussed planks in the platform of the New Apostolic Reformation (NAR) is an adherence to a false authority paradigm. Now it is important to realize that there is expected authority within the structure of the church. Paul speaks at length to order and calling. This does not mean that those the labor in teaching and preaching are better than laypersons; rather they have a different calling. Their labors will be judged harsher because the blood of their listeners hangs in the balance of what they say. Thus they are due double honor. So do not confuse this. God is not a God of disorder. That being said, not all authority is equal and therein lies the rub. The NAR leadership is off theologically. Mike Bickle teaches Joel's End Time Army and the Bridal Paradigm. Bill Johnson teaches the actual gifts of the spirit and false signs and lying wonders. Joel Osteen and Joyce Meter teach word faith and speaking things into existence. The fact that they are in positions of authority is not something to be respected but rather, something to be rebuked. Titus teaches us that ministers of the Gospel must be prepared to rebuke those that do not teach correctly. I am not singing Kumbaya with a wolf devouring my brothers and sisters. The false teacher deserves nothing but our utter contempt and the working end of the shepherd's rod. Authority is completely irrelevant to that discussion.

The NAR however realizes that their leadership is tenuous at best because they are not backed by scripture. So the false authority paradigm says anyone in leadership must have been placed there by God and thus we must respect the mere fact that they are in leadership. This is absurdly unbiblical. I present just one instance in the key verses when Jesus dealt with the religious leadership of His day. Was He "respecting" the Pharisees by calling them white washed tombs and a brood of vipers? Of course not because they did not deserve such respect. This false authority paradigm is rooted in the conflation of God's permissive will and His decretive will. It is true that God will use everything for His glory. It is true that everything that happens, including the rise of false leaders, can only occur within what He permits; His permissive will. That does not mean He decreed it. It does not mean He prescribed it. Despite the Charismaniacal teachings of God intervening for every hangnail in our lives, the bible shows that God does not actually interfere much at all. Sin and sickness entered this world through the sin of Adam. The unregenerate heart can blame God but ultimately we do not want to be mere puppets in the hands of the Creator. We cannot have it both ways. If God prescribed all leadership than He prescribed the evil of Hitler and Stalin. We know that runs contrary to His character but we also know He permitted it. This is different than let's say Babylon for example. The capture and exile of the Jews was prophesied in Deuteronomy 28. It was a direct result of the disobedience of God's people. Now, it is true that God may raise up a false teacher on purpose as wrath upon those who do not want to hear the truth. Paul Washer once quipped that Joel Osteen was God's wrath upon those willing to sit through his sermons. The more likely proposition is that the false teachers within the church rose themselves up by scratching itching ears and have been rewarded through the cult of personality system with the purpose driven church model. Now they stand as a witness against the apostate church that adores them so much and is willing to sacrifice the verity of scripture on the altar of a false blessing theology.

The above link is to a very brief video snippet from someone named Putty Putnam and no, I am not kidding. He is the overseer of a "School for Kingdom Ministry" with Vineyard Church, which sounds very NAR'ish to me. Even though it is brief it does touch on the teachings of the false authority paradigm so let us reason once more together.

'Putty Putman, overseer of the School of Kingdom Ministry and a leader at the Vineyard Church of Central Illinois, says we must honor our leaders as a way of honoring God's ultimate authority. In a video, Putman says, "We cannot dishonor leadership without dishonoring the fact that God is the ultimate leader. You can't divide those apart. Once you begin to say, I'm against leadership, in some way you're positioning yourself against authority as a whole and ultimately against God's authority."' -- Charisma News

This is flat out an absurdly unbiblical teaching. We must test everything and hold to the good. If you honor a false teacher you are in fact dishonoring God by showing utter contempt for His word. The Bereans were considered more noble not because they accepted what Paul said but because they compared it to scripture to ensure he was teaching correctly. Try correcting a NAR pastor today and see what happens. You will be blessedly subtracted out of that church so fast it will make your head spin. Why? Because they is what they are taught by Rick Warren's Purpose Driven Church. The leader casts the vision and the sheep follow or are cast out. Literally this is taught by Warren to up and coming pastors. When disgraced pastor Mark Driscoll was at the height of his abusive tenure at Mars Hill Church he actually preached the following from the pulpit:

"I'm all about blessed subtraction. There is a pile of dead bodies under the Mars Hill bus [chuckles] and by God's grace it'll be a mountain by the time we're done. You either get on the bus or get run over by the bus. Those are the two options. But the bus ain't gonna stop." -- Mark Driscoll

That is not even remotely Christian in nature or deed. To refer to people you hurt for daring to disagree with you as a "pile of dead bodies" should not be honored in any way. Driscoll was a perfect example of an abusive leader who should have been rebuked out of ministry by his elders or flock but instead was coddled and protected until he felt comfortable enough to steal 250,000 dollars in tithe monies to cheat the NYT Time Best Seller List. According to Putty Putnam, positioning yourself against such unbiblical leadership is akin to positioning yourself against God when the opposite is true. We must always position ourselves against what is false, authority be damned. Putty continues:

'He notes that this does not mean, however, that all authority and leadership is perfect--simply that we must show the God-given honor they deserve. "Not every person in leadership is in alignment with God's will," Putman says. "And do we pray for them? Absolutely. And do we, when necessary, stand for justice? Yes, we do. I'm not saying that we don't pursue the Lord's end. Absolutely we do that. But as we do that, it's very important that we recognize that God created authority and I'm not going to dishonor that reality."' -- Charisma News

Like I said, somewhere even the false teachers know this paradigm is false so they try and couch it like Putnam does here. Beloved, we are not talking about a flaw in a leader and Putnam knows it. Following leaders blindly is how you end up in Guyana drinking Kool-Aid with Jim Jones. As a lesser example, it is how you end up following a false theology and thus a false christ and stand before the real Christ on the last day saying "Lord, Lord" while He says He never knew you. Yes, it is that serious. God did not "create" all authority -- He allowed it. He also gave you a discerning eye and a brain in your head. Christianity should not result in your brain checking out but rather that your spiritual insight gets honed. I am not saying we buck all authority but rather that we test everything and hold onto the good. The Putty Putnams of the world can take their false authority paradigm and peddle it somewhere else. True believers should not fall for it.