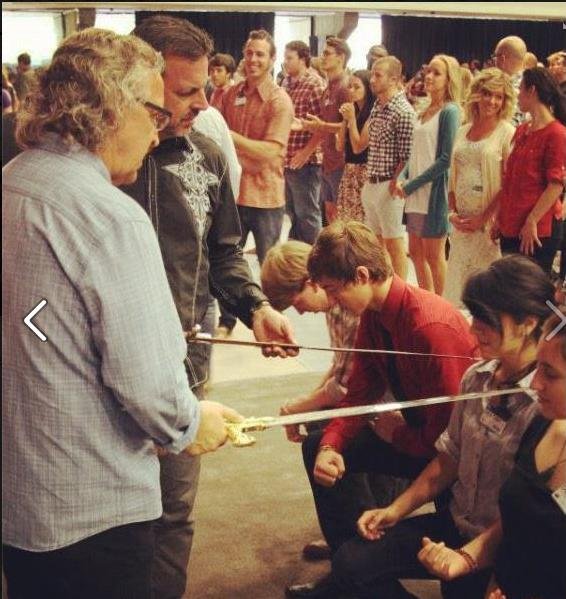 All these are empowered by one and the same Spirit, who apportions to each one individually as he wills. -- 1Corinthians 12:11 (ESV)

Are all apostles? Are all prophets? Are all teachers? Do all work miracles? Do all possess gifts of healing? Do all speak with tongues? Do all interpret? But earnestly desire the higher gifts. - 1Corinthians 12:29-31 (ESV)

The above link is to a 10-minute interview with Bill Johnson, backstage at this year's Hillsong Conference. Johnson and the Bethel Church he operates is a cesspool for false doctrines. Simply put, Johnson believes in nearly every type and style of false teaching today. He mixes them into a toxic stew for those who have fallen under his cult. His church also operates a school of the supernatural where he pretends to be able to teach you the gifts of the Holy Spirit for a mere five thousand dollars in tuition. The above key scriptures for today dispel such silliness. The first verse clearly explains that only the Holy Spirit decides when, where and to whom a particular gift may be apportioned. So, Bill Johnson cannot possibly teach you how to operate in any gift! By claiming he can, he is usurping the power that only God has! The second set of verses remind us that no one can have all the gifts. The implicit answer to these questions is, no. Are all prophets? No. Are all teachers? No. Do all work miracles? No. If this is the case, how can you operate a school teaching the opposite of scripture? Let's reason together as we see some of the various teachings Johnson endorses with his answers in this interview:

"The Holy Spirit is the spirit of resurrection," Johnson says. "And the Holy Spirit took up residence in every believer and He wants to flow through to demonstrate the resurrection of Jesus. Every miracle demonstrates and reaffirms that Jesus is alive. So we owe the world an encounter with God. We owe them the opportunity to taste, experience and see--change their perception. What you taste will change what you see, and that's our obligation to people right there. We owe that to people: an encounter with the Almighty God. We don't just owe them words. We owe them words that are soaked with presence that will bring them into an encounter with God."

Bill Johnson's Bethel Church is ground zero for experiential Christianity. Nowhere in scripture does it say that the Holy Spirit wants to flow through you to display the resurrection. Experiential Christianity raises our personal experience to the level of scripture. When Johnson says, we owe them more than words, he is taking yet another shot at the word of God. Johnson has already been on record saying we do not worship the Father. Son and Holy Bible. Johnson does not want you in scripture because you might learn how false he really is. An experiential encounter cannot save anyone beloved -- only the word can! Only the Gospel has the power of God unto the salvation of man. The Great Commission was not Jesus sending people out to sell an encounter with the God. Instead we are supposed to share all that Jesus taught You know, the Gospel!

"Johnson says if a miracle does not happen, it's important to set aside time to talk to God to find out why it did not happen. He says miracles should always happen, because the Bible never depicts Jesus failing to perform miracles. "You pursue a miracle," Johnson says. "Let's say we're praying for somebody. If they get a breakthrough, Jesus gets all the credit. We make sure that we don't put the attention on the gift, on the prayer of faith. I'm thrilled we get to be involved, but the miracle is Jesus entirely. If it doesn't happen, we get alone with God to find out why, because Jesus never had that experience. He never had that experience. And He set it up to where we're not supposed to either. So it's not a moment for guilt and shame. It's not a moment for introspection. It's a moment to draw near." -- Bill Johnson

Johnson is also home to ground zero of the false signs and lying wonders network of churches. All of the absurdly false manifestations of the spirit? Bethel Church is home to them all. Gem stones and gold dust are common. Johnson himself claimed on camera that he walked into a diner and angel feathers just started magically floating down all around him from heaven. The new experience of glory clouds started at Bethel. These are all false signs beloved and to make matters worse, Johnson refers to them as miracles. He is also talking about healing here because if there is one thing Johnson sells incorrectly it is divine healing. Johnson, who wears corrective eyeglasses, believes God must always heal us. No sovereignty of God to worry about -- He must heal everyone. The result of this aberrant teaching is that people who are not healed either blame God or themselves. One of the more evil things about Johnson is his ability to mix enough truth to sound reasonable to many who do not study. So yes, Jesus never saw a miracle fail but no He did not "set it up that way" for us. This is the little gods heresy that follows word faith doctrine, two more false doctrines that Johnson embraces and teaches. That our words have the same power of creation that God has because we are in fact, little gods. Pure heresy.

"In response to a question about how he cultivates gifts such as prophecy, Johnson replied, "When I taught my boys to ride their bikes I took them to the park where there was a lot of grass so that when they fell, they fell safely. You have to create a context for people to learn the gifts, to operate in the gifts of the spirit. You have to give them permission to not get it right. In fact at our school we actually require our students to fail three times their first year. At least three times or they can't graduate." -- Bill Johnson

Wow. The sheer mockery of the gifts of the Holy Spirit is so stunning when you see it up close and revealed. Johnson is proud of answers like these because he truly believes. Prophecy beloved, is claiming God has spoken to you. Now, if the creator of heaven and earth spoke to you, why would you need to fail at hearing it correctly three times? Does He stutter? Does He change His mind? Is God vague? Not at all. He is always right and always crystal clear. This false prophecy paradigm is generally accepted throughout the NAR and affiliated churches. The Kansas City false prophets such as Mike Bickle and Rick Joyner, believe that a 65% accuracy rate indicates a solid prophet. This isn't a game! That means for every 100 people you give a "word from the Lord" to, you are wrong to 35 of them! That is 35 people who will either blame God or themselves! Do you have any idea how much damage you are doing to people?

So what is really going on here? Johnson and Bethel teach unsuspecting kids that prophecy is teachable by emptying your mind through things like transcendental meditation. They are taught to "listen" to the first thing that pops into their mind and assign ownership of that thought to God, thus making it prophetic. Johnson then encourages them to make mistakes because he knows that they will. Anything that matches is deemed a successful prophecy and anything that misses becomes a "learning experience." They fail to realize that what they are cultivating is a generation of people who attribute the wickedness of the evil hearts to a word from God. Johnson falsely believes everyone can prophesy despite what the key verses teach us. He holds prayer services where it turns into open mic prophecy night as everyone is encouraged to come up and prophesy. It is such a slap in the face of God. You cannot learn the gifts regardless of the context.

One question asked was about the input Johnson has on the music Bethel produces. He said that sometimes Brian (his son) will call him up to ask if a proposed lyric is theologically accurate, to which I laughed and laughed. Bethel produces music that reflects their fearless leader Bill Johnson. Devoid of biblical truth, mocking of the prophetic and at its heart heretical. Johnson runs a cesspool and we only scratched the surface. We did not even get into the time Bill went to pray over and anoint Todd Bentley a prophet. The same Bentley that would soon fall from grace for an affair with his secretary. Bill oversaw his restoration, which included a divorce and marriage to his secretary. We did not get into the Holy Spirit being called a sneaky blue genie or the dead raising team, nor the practice of grave sucking. While all important, this interview highlighted the core of the heresies. Word faith, false signs and lying wonders, and a heretical school demonically teaching kids to blame God for their own wickedly deceitful hearts.

Credentialed Minister of the Gospel for the Assemblies of God. Owner and founder of 828 ministries. Vice President for Goodwill Industries. Always remember that in all things God works for the good of those who love Him and are called according to (more...)
Related Topic(s): Christianity; Faith; God; Prophecies, Add Tags