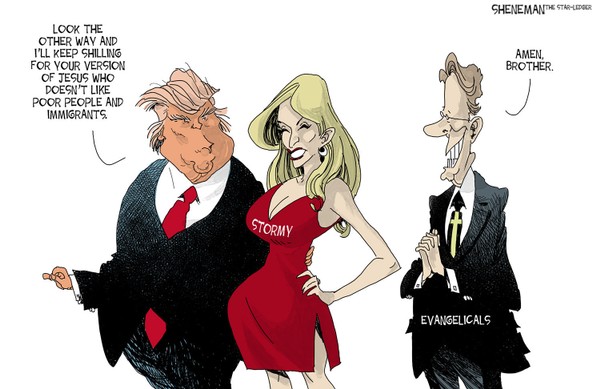 Were you a bondservantd]"> when called? Do not be concerned about it. (But if you can gain your freedom, avail yourself of the opportunity.) For he who was called in the Lord as a bondservant is a freedman of the Lord. Likewise he who was free when called is a bondservant of Christ. You were bought with a price; do not become bondservants of men. - 1Corinthians 7:21-23 (ESV)

From the files of God must be shaking His head, comes the story this week that flew under the radar more than it should have. Amidst the explosion of COVID in arrogant states that decided to open everything up in the middle of a plague such stories can be successfully buried by a late Friday afternoon press dump and a clever distraction, such as commuting the prison sentence of someone akin to a Batman cartoon villain. Even the church was distracted by the horrors of worldwide persecution and, wait a minute not that. They were distracted by the nerve of the government demanding that they not sing in service and thus spread the pandemic further. Nevertheless, as all of these monumental topics were being reasoned about, the apostate church ponied up to the feeding trough to get paid their 30 pieces of political silver for delivering their sheep to the voting booth on behalf of this president.

You see, the government recently created a loan program designed to help SMALL BUSINESSES during this difficult time of COVID. The Paycheck Protection Program (PPP) was designed to help the little guy save his business and if they retained their staff during this time the loan was forgiven. The government, who really created this as a slush fund to facilitate the repayment of political favors, made the rules so lax that almost anyone with a decent lawyer could grab millions of dollars. You can do a simple Google search to find the list of friends and family who benefited from the president's fund. Among them were people who cut a deal with him in 2016 to this day. They were the people who held the keys to the one voting block candidate Trump needed more than any - the evangelicals. People like Franklin Graham got their money up front as Trump personally donated to both of Graham's charities that pay him close to a million dollars per year. Hey, brother's got to eat right? The rest of the crowd would have to prove their fidelity to their new idol but eventually it would be payday and that day has arrived.

It has arrived for Robert Jeffress, diehard Trump worshipper and NAR dominionist. Jeffress has campaigned with Trump and once declared that him as a Christian warrior. His First Baptist Church of Dallas, which recently welcomed Vice President Pence, received a PPP loan between two and five million dollars. Cha-ching! Less outspoken churches like Willow Creek, still reeling from the removal of Bill Hybels received between five and ten million dollars through the program. Now in their defense, Willow Creek needs the money after paying out over three million dollars in court settlements regarding a church volunteer sexually abusing children. The same five to ten-million-dollar loan was given to the Catholic Church, who takes a back seat to no one when it comes to sexually abusing children. Joyce Meyer cashed in for five to ten million dollars as well! I guess this was payback for the Senate investigating her finances several years ago.

City of Destiny Church only asked for and received between $150,000 and $300,000 dollars, a surprisingly low amount for Paula White, who also serves as the President's spiritual advisor. Perhaps they recognized how bad it would look so they went low. That amount for White is still larger than the average PPP loan which stood at $107,000. Huge Trump backer Ralph Reed and his Faith and Freedom Coalition received between $150,000 and $300,000. Cross Church of Arkansas, who Pastor Emeritus sits on the Trump Evangelical Board received 1.8 million dollars. The American Center for Law and Justice was originally founded by Pat Robertson and now boasts Jay Sekulow as their chief counsel, received one-two million. Sekulow also represented the President when he was impeached but hey, what's a little conflict of interest when you are already bilking the government for millions of dollars?

Now I do not actually blame the churches listed here because I except nothing less from carnal organizations that serve the devil and not Christ. This is simply how business is done. It is those that call themselves Christians that still defend this that are the real problem because a cult of personality false teacher has no power if no one follows them. There are thousands of people who lost their businesses that this program was supposed to protect. They lost it because people claiming to represent Jesus Christ treated it like their personal bank account. The average loan was only 107K and these charlatans are asking for five million a pop. I am sure they are still aggressively demanding tithes during this time as well. Do we care anymore? Do we care how Christ is represented?

Now obviously these churches do not care about the word of God but do we? Are we still willing to learn and hear from God? The key verses were interesting to me for today's discussion. They primarily are dealing with who we are when Christ saves us. The word bondservant can easily be "slave." If you come to the Lord as a slave - He sets you free. If you come to the Lord as free man - you become a slave to Christ. Then there are two glorious statements for us to consider today and the first is that we were bought with a price. We tend to forget this in modern Christendom as the suffering of Christ is sacrificed for how much God loves you. The apostate church never connects those two dots. The cross exists specifically because of how much God loves me. Heretic Todd White once preached that the cross shows him his value. That is the end result of narcissistic NAR preaching that turns every bible story into a referendum on how great we can be and every worship song into self-adoration.

The other statement is do not become bondservants, or slaves to men. Beloved, man is a horrible taskmaster. This is why we are called as a church to not be involved in the politics of man. Jesus was completely apolitical when He walked the earth. There is little time remaining and the people who need the Gospel of Jesus Christ belong to both political parties. For almost four years now the world has seen the apostate church cozy up to this president and then this week he paid them for it. Do you think this simple connection is lost on the world? Why would anyone unsaved want to hear anything from people they saw just bought off by the government? Would you?

Credentialed Minister of the Gospel for the Assemblies of God. Owner and founder of 828 ministries. Vice President for Goodwill Industries. Always remember that in all things God works for the good of those who love Him and are called according to (more...)
Related Topic(s): Evangelical, Add Tags