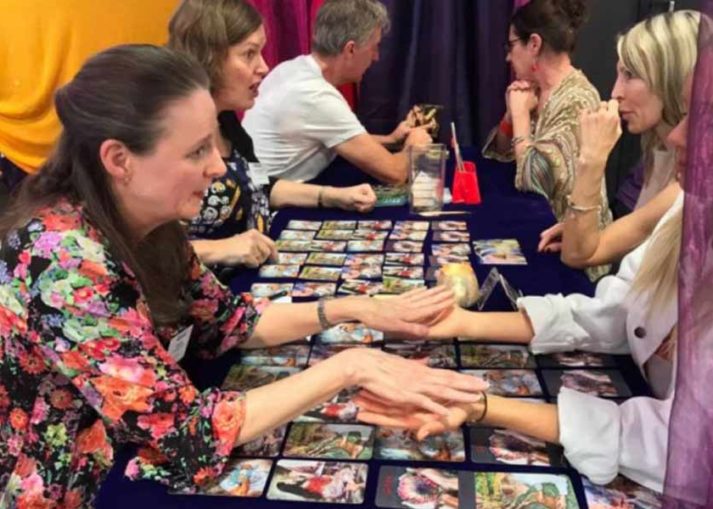 "When you come into the land that the Lord your God is giving you, you shall not learn to follow the abominable practices of those nations. There shall not be found among you anyone who burns his son or his daughter as an offering, anyone who practices divination or tells fortunes or interprets omens, or a sorcerer or a charmer or a medium or a necromancer or one who inquires of the dead, for whoever does these things is an abomination to the Lord. And because of these abominations the Lord your God is driving them out before you. You shall be blameless before the Lord your God, - Deuteronomy 18:9-14 (ESV)

You would think there are some topics you will not have to write about. You would hope to not have to remind Christians of such basic fundamentals until you see entire churches engaged in them and so-called leaders standing by and facilitating it. One would hope anyway. Let me start by saying this is not about Christalignment, but we must briefly discuss it to understand the conversation we wish to have. Christalignment is a practice within the NAR fringe that uses Christian based tarot cards to reach out to the lost. Now those that practice it will not agree that it is tarot but ignoring the truth does make something less true. Bottom line is these are cards, with pictures, that are used in readings, for the purpose of seeking something unknown supernaturally. Not only is that the definition of tarot, but it is the definition of divination. As we can easily see from the above, divination is considered an abomination to God. Why? Because you are relying upon the demonic to find things out that God is control of. That is the same sin of Christalignment. Now this became a national issue when it was revealed that Bethel Church (shocker!) was somehow involved. In a letter to Kris Vallotton, the creator of Christalignment reveals all we need to know:

"The cards we use are our own, and are not tarot nor remotely similar to tarot. We know tarot cards are very dangerous and highly discourage it. The tools we made help us lead people into deep God-encounters at our tables, and our aim at Christalignment is to attract tarot reading clients, people who are fully into new age practises, psychics, and witches. All of these people can immediately recognise that our cards are not tarot once they sit down at our tables.

They are all non-predictive, but we call them destiny cards as we believe that giftings and callings given by God for people are certainly part of their destiny.

The team is trained not only to be able to release deep encounters with the Spirit of Truth to clients but to also release words of knowledge and healing. For clients to see Jesus standing before them in an encounter is not uncommon, and many of them get born again." -- Jenny Hodge

So Jenny Hodge believes that she can lead unsaved tarot readers into "God encounters" using a deck of pictured cards but insists it is not tarot. That is some world class word gymnastics on display there but it is simply a silly statement. More silly however is the statement that these are not predictive, but they refer to them as Destiny Cards because they will reveal things that are part of their destiny, or in other words -- predicting their future. Perhaps the silliest of all however is the notion that her team can release encounters with the spirit of truth, also known as the Holy Spirit. Do we follow what this claim means? That using prohibited and abominable means, Jenny Hodge believes she can control the Holy Spirit and release Him upon unbelievers by using words of knowledge and healing. Make no mistake beloved -- what going on here is supernatural but it is all within the demonic realm. So with that as the backdrop, let us turn to Dr. Michael Brown, NAR Gatekeeper. Dr. Brown uses his radio show to prop up some of the most egregious false teachers on the planet. Through my appearances on the show alone he has referred to Bill Johnson, Joseph Prince and Benny Hinn as "good brothers in the Lord." Mind you, he will condemn the individual practices each are known for. Heck he even wrote a book against greasy grace, for which Prince is renowned. His problem is rarely in espousing false teaching (other than NAR dominionism and Charismania) but rather in his defense of those who practice and teach such heresies. I am sure Brown would denounce the coat waving healing and predatory prosperity preaching of Hinn but he still went on his television show for a week. I am sure deep down he knows a "sneaky squid spirit" is probably a bridge too far but he has had on Jennifer LeClaire to defend such garbage. Therein always lies the rub for Dr. Brown and sure enough, he granted Jenny Hodge the platform of appearing on his show and the tweet that followed sums up the gatekeeper status of Dr. Brown so well:

"I appreciate Jenny Hodge coming on my show today, and my goal was to understand her practices and beliefs. Having spoken with her, I don't question her sincerity or her desire to see people come to Jesus and be saved. But I do NOT agree with or endorse the practices used, specifically stones and cards and readings." -- Dr. Michael Brown

Sigh. Dr. Michael Brown just cannot see what is so glaringly wrong. While I am glad he denounced the practices that are clearly forbidden in the bible, he just could not bring himself to be critical of the false teacher behind those practices. I want us to seriously think about this for a moment. Does the sincerity of Jenny Hodge matter at all? When Simon the Magician revealed his heart by offering money to Peter, did it matter one bit to Peter that Simon may have thought his intentions were somehow noble?

But Peter said to him, "May your silver perish with you, because you thought you could obtain the gift of God with money! You have neither part nor lot in this matter, for your heart is not right before God. Repent, therefore, of this wickedness of yours, and pray to the Lord that, if possible, the intent of your heart may be forgiven you. -- Acts 8:20-22 (ESV)

Jenny Hodge's intentions are irrelevant. Her heart is not right before the Lord and she needs to repent of this demonic wickedness. It is ironic, because when Dr. Brown was defending Bill Johnson to me he said that I "did not know how much he loves Jesus." This is the problem with using subjective defenses. They are worthless. If Bill Johnson loved Jesus he would start by obeying Him. If Jenny Hodge had a serious desire to see people saved she would stop using demonic tricks to achieve those ends. In her entire letter to Kris Vallotton there was not one mention of the Gospel, yet she believed she could save people through her cards.

So Dr. Brown gets one kudo for at least denying what the Bible has forbidden but he loses all credibility once again by refusing to denounce those that practice the abominable teaching. He still gave her his platform. He still shared the stage with her. He still said he appreciated her. He still affirmed her sincerity and somehow claimed that she genuinely wants to see people saved even though she practices demonic divination. That is really all we need to know about Dr. Michael Brown.