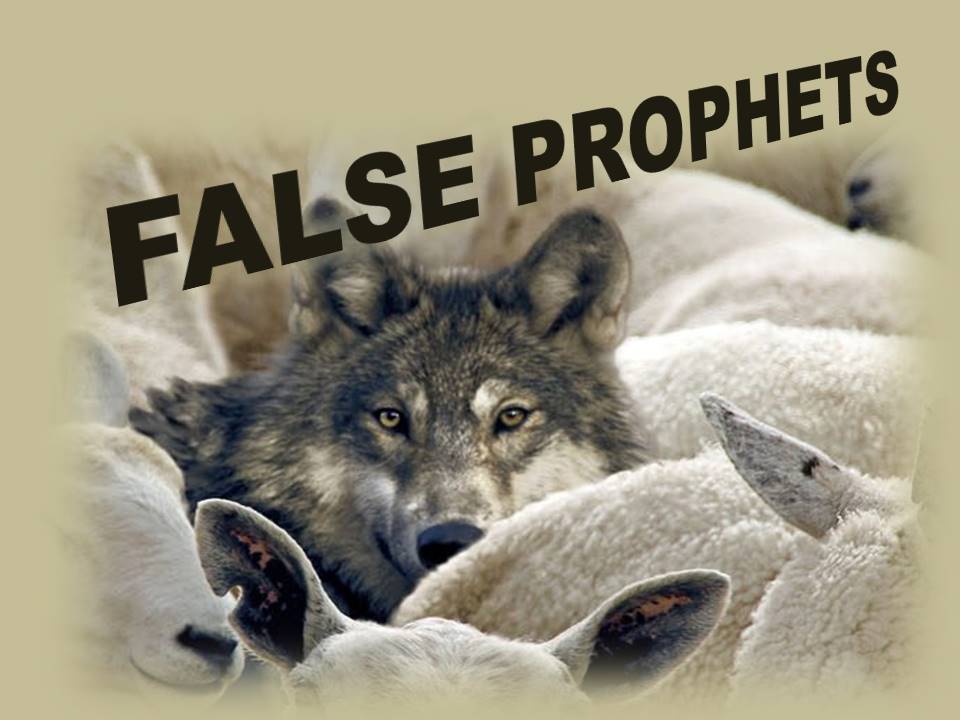 Sometimes it is fully necessary to publicly rebuke those who seek to devour the sheep of God in forceful manners. One would hope that the gaggle of false prophets who were exposed this election as such would just quietly slink away and pop up again in a short time hoping people's memories had faded. Unfortunately, these charlatans can only make money as long as they are selling the snake oil of false prophecy. Let's be very clear. Prophecy is claiming to have heard directly from God a message for His people. The final revealed word of God is already contained in scripture. God did not forget to tell us something that He now is bringing to us through some idiot at Charisma News. It is time for people who claim to be Christian to stop being the openly stupid people. Enough damaging the witness of Jesus Christ by following these wolves who not only do not hear from God but are exposed as such. The key verses are what God says about false prophets. Those who speak falsely on behalf of God have done so presumptuously. They are done so arrogantly. Those same prophets shall die. Another verse says their destruction does not slumber. How shall we know they are false? Is it a 65% accuracy record as proposed by many false prophets today? Nope. One time is all they get. One time wrong and we need not be afraid of them. We are to mark them and avoid them like the plague they are. Sound harsh? Too bad - take it up with God. It really is not harsh at all if you think about it. These miscreants are claiming to hear directly from God when they are not. Why in the world would you want to hear from them again? Such is the case of Jeremiah Johnson, NAR false prophet and darling of Charisma News. Jeremiah prophesied that Donald Trump would win this election. Not only that he arrogantly boasted that when Trump is reelected it would be the third of recent prophecies to be fulfilled. Nope. Sorry Jeremiah but you were wrong. Apparently, people have been letting him know so he doubled down on his arrogance and stupidity with the Facebook post quoted below. Let us reason once more:

"While we wait until January to determine our next US President, observe the stunning blindness and hypocrisy in the body of Christ. Christians who voted for the shedding of innocent blood, the Equality Act, and anti Israel legislation (ALL things God HATES) are now picking up stones to persecute prophets who supposedly missed it. While inaccurate prophecy requires repentance and effects the PRESENT. Aligning with and voting for issues that God so clearly considers abominations requires repentance and effects ETERNITY. As we seek greater accountability in the prophetic movement in the years ahead, let's also be in pursuit of greater accountability concerning where we will all spend eternity as well. Someone had to say it." - Jeremiah Johnson

Inaccurate prophecy requires you being stoned to death Jeremiah. The fact that you think that speaking falsely on behalf of the creator of the universe only has temporal consequences only further reveals you have not the first clue about the bible. The bible Jeremiah, says that your condemnation hangs over you and your destruction is set. It is done already. While I take no personal glee in this, you need to understand that what you are accusing others have, casting a vote, is not even close to the sin you wrap yourself up in every day by pretending to speak for God Almighty.

Secondly, your assertion here is that your sin of lying about hearing from God is only a matter of the present while those who cast votes are sinning for eternity is a blasphemous absurdity. It does not pass the test of basic logic. Your assertion is that because Donald Trump runs as a Republican and their platform calls for the end of abortion, Christians are compelled to vote for him or face the fires of hell. You are insane Jeremiah. The decision of Roe was given to us by a Republican Supreme Court and reaffirmed by a different Republican Supreme Court. You are ascribing righteousness to people who claim a platform to eliminate something they created. Let me give you a more recent example. I assume in 2000 and 2004 you insisted that Christians must vote for Bush and if they voted for Gore or Kerry that they will go to hell unless they repent of those votes. While the platform of the GOP back then was the same what did Bush do about abortion, even with full control of Congress for two years? Absolutely nothing. He did however start a war based on bogus intelligence that slaughtered over a million people. You know - innocent blood? Let's skip to 2012 when you were undoubtedly demanding Christians vote for Mitt Romney for the same platform reason. So, it is your belief that God's choice was the member of a Satanic cult (Mormonism). That is what you advocated for Jeremiah. In 2016 you insisted Christians vote for a thrice married, cheated on all of them, twice divorced, porn star sleeping with, female genital grabbing failed businessman with six bankruptcies who stated that he has nothing to ask God for forgiveness for. That is the bastion of godliness you have aligned yourself with and while standing in his shadow you dare to mock your sin while assigning Christians to hell because of their vote. Enough Jeremiah. Someone has to say it so I will. Just shut up. You have been exposed by God Himself as a false prophet. You are rebuked. You are marked.

Credentialed Minister of the Gospel for the Assemblies of God. Owner and founder of 828 ministries. Vice President for Goodwill Industries. Always remember that in all things God works for the good of those who love Him and are called according to (more...)
Related Topic(s): God; Prophet, Add Tags