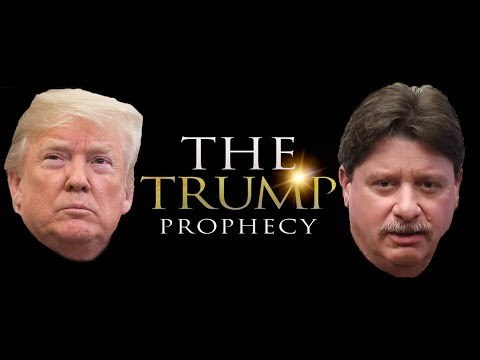 Back in 2012 there was a firefighter who claimed that God had told him Donald Trump would become president.

Did everyone get that? In the year 2012, when there was a presidential election, Mark Taylor claimed a prophecy that Trump would be elected that year. You know, the year Obama won reelection. God has a technical and hermeneutical term for this -- false prophecy. Fast forward four years and lo and behold Donald Trump was elected so Mark Taylor just barely missed it by four years but nonetheless he missed it. In the modern-day era of false prophets and the NAR however, it was deemed close enough. Mark Taylor declared victory and claimed he just misheard the "when." Except prophecy does not work like that. God does not misspeak, nor does He stutter. Either way, Taylor was welcomed into the fold at Charisma News because of his Trump worship and this one false prophecy, which he claims is true. He has ridden this opportunity into a career as an insane right-wing nut who embraces all sorts of conspiracy theories in the name of Jesus. This past week he appeared on a radio talk show where his insanity was on full display:

"We have this movie that we rehearse over and over in our head, how we feel that something is supposed to come to pass, and when something doesn't come to pass in the way that we've rehearsed it in our head--these unexpected expectations--then people say, Oh, that's a false prophecy. No, it just didn't come to pass the way you wanted it to." -- Mark Taylor

In the era of alternative facts, this is what is left of the truth. Mark Taylor said 2012, period. He did not say at some point in the future. He did not say 2016. He said 2012. Now, is it still interesting that Trump was elected four years later? Absolutely but it does not change what he said. So, it is not that it "did not come to pass as we wanted it to." It is that it did not come to pass as YOU said it would. That makes you a false prophet who has said something on behalf of God that he never said. The example Taylor provided on the talk show was his prophecy that Barack Obama would serve a third term in office. Yes, you read that right. Mark Taylor openly prophesied that President Obama would serve a third term in office. Now, did that happen? No, it did not. Yet according to Mark Taylor it did! How you ask? Because Obama is secretly running a shadow government and according to Mark Taylor -- that is his third term right there! So, Taylor has figured out the secret to ensuring 100% accuracy in false prophecy -- just make stuff up. Mind you beloved, when this lunatic is referenced in mainstream news it is as a Christian! That should give us all pause. That was however not the craziest thing he said on this show:

"I tell these keyboard commandos that before you hit that enter button and you attack someone, you had better make sure that they are not God's anointed. People don't understand the implications of that. You are literally taking your life into your own hands right now because judgment is here. It's not coming, it's here on the earth right now and God's not putting up with it. So before you go calling someone false, you have better make sure that you have got all your facts and your ducks in a row." -- Mark Taylor

Wait, let me make sure"yep all my ducks are in a row. You Mark Taylor are not only a false prophet, but you are mentally unstable and biblically illiterate. You are not God's anointed. You are His enemy. The bible says we either gather people to Christ or scatter them away from Him. Which do you think your nonsense accomplishes? The verse you reference is the key verse today and understanding the context reveals that you do not have the first clue what God is actually saying. This verse is in the middle of a song of thanks David is singing to God. David is recounting how God always protected the patriarchs of the Jewish people. It is true that many false prophets and teachers use this verse as a blanket protection from criticism but that is simply unbiblical. In fact, according to 1John, we all are the anointed in the New Testament church. Furthermore, the designation of anointed does not insulate us from harm.

Therefore also the Wisdom of God said, 'I will send them prophets and apostles, some of whom they will kill and persecute,' -- Luke 11:49 (ESV)

You are correct about one thing Mark -- judgment is here. God is not going to put up with the likes of you are very long. You will answer for every person you have led astray while pretending to hear from God. You are the huckster the bible warns us about. You are a side show making merchandise off of the sheep of the Lord and your fifteen minutes are up.