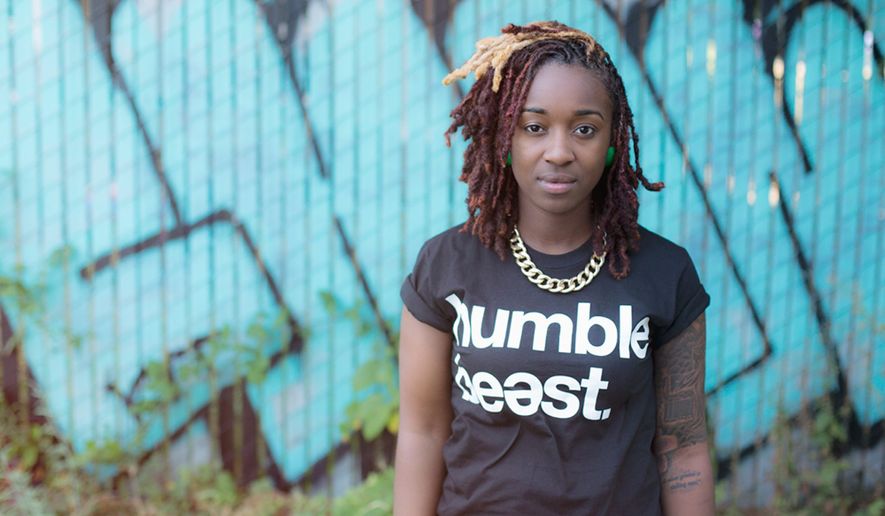 Whoever is not with me is against me, and whoever does not gather with me scatters. -- Matthew 12:30 (ESV)

To be honest, I had never heard of Jackie Hill Perry until the story linked above came to my attention. Apparently, Perry came out from a Lesbian lifestyle to follow Christ and hallelujah to that. With that aside, it does not give her reign to lead others astray with views that are fundamentally unbiblical as we will see in this article, which is a reaction to criticism she received for speaking at a Christine Caine conference and referring to Bethel's Jenn Johnson as her friend. I understand if she follows the theology of people like Caine and Johnson that she can be confused that Christianity is about her but it is not. What is disheartening is she supposedly follows some reformed teachings but this apparently has not led to real biblical discernment. Let us reason again beloved through this article:

'Ex-lesbian Jackie Hill Perry recently rebuked Christians who were angry that she spoke on stage at Christine Caine's Propel Women conference and called Bethel Music's Jenn Johnson her friend. Perry teaches mostly among Reformed circles and does not subscribe to Word of Faith doctrine, according to a recent Twitter post. But on Saturday, Aug. 24, she spoke at Propel Women's Activate 2019 conference in Fort Lauderdale, Florida, along with Propel founder Caine, Lisa Harper, Sarah Jakes Roberts and Nona Jones. Johnson led worship for the night. "While there, being the Millennial that I am, I posted videos of the worship set, clips of my teaching, and the Twitter infamous clip of me calling Jenn Johnson (of Bethel Music) my friend," Perry tweeted. " Perry says some people responded to her videos with "words [that] didn't have an ounce of love." She says she grieved when she saw one woman simply respond by writing, "Yucky."' -- Jackie Hill-Perry

Well, I agree yucky is a tad childish as a response. That aside, Perry should not want to share the stage with heretics. That is the point of the uproar. It is this complacent attitude among many in good standing that ruins their credibility by sharing it with those who do not profess the real Christ. The obvious example is Dr. Michael Brown who correctly criticizes false doctrine but refuses to refer to people teaching it as false. Realize we are not talking about borderline cases here. Christine Caine is an outright heretic as is Bethel Church and Jenn Johnson. It is Jenn who once referred to the Holy Spirit as a "sneaky blue genie." I do not know the rest of the names except TD Jakes daughter who I have never heard preach anything substantive or correct. So the problem is not going to social media or taking pictures. She should not have been there to begin with.

"And just as Perry doesn't mince words when she shares her testimony of leaving a lesbian lifestyle to follow Jesus, neither did she hold back when she rebuked Christian tribalism.

"I'm going to be a bit frank so clutch your pearls or grab your tea, whichever suits you best," she wrote on Instagram along with several pictures of her at Activate 2019. "One thing I want you all to know about me is that I'm not tribalistic when it comes to ministry. You might see me on platforms with Reformed folk one day and with non-Reformed folk the next day. ... Why? Because I believe that God's church is big and multi-faceted and it's made up of people who are complicated and nuanced." -- Jackie Hill-Perry

I am not going to mince words either when I say that Jackie Hill-Perry has no discernment. This is not about tribalism or whatever cute name she wants to use to try and pretend this is someone else's problem. It is hers. Let me cut through the haze. There are only two tribes. There are the sheep and the goats. The saved and the lost. As the key verse says, those gather people to Christ and those who scatter them away. You chose to join the tribe that is actively scattering people away from Christ Jackie. This does not mean they are liars or do not even mean well. I am sure Jenn Johnson is a really nice person. That does not mean she is not also really really wrong. When Jesus comes back, nice people are not going to heaven Jackie. People who placed their faith in the correct Christ will. That is why doctrine is so important. That is why Jesus made it clear by saying two choices. Two tribes. Pick wisely. The bible says narrow is the way to heaven and few are those who find it. Few Jackie, not big and multi-faceted.

'Perry says that she has no problem teaching alongside genuine Christians whose doctrine may vary from hers when it comes to worship style, preaching, spiritual gifts and approaches to evangelism. "I don't agree with everybody I do ministry with (including the folk people might call 'theologically sound.' Some of them, being blindly complicit when it comes to white supremacy, who are faithfully inspired by the theological musings of slave masters but that's a whole other conversation) but I love them still. " she writes. "And where I disagree, I'm open to discussion, and where I can learn, I have ears to hear. So yea, just in case you think I'm apart of 'your tribe' just know that I'm not. I'm too free for that."' -- Jackie Hill-Perry

You are free Jackie. You always were. Free to choose whatever lifestyle you want. Free to even choose the wrong ones within the church system. What we believe matters. What we place our faith in matters. I agree that nuances in preaching or worship style are not the issue. Preaching or worship that is unbiblical is. You can have a different view of the gifts or evangelism. Those are not salvation-based disagreements. I am not chasing you down the rabbit hole you threw out there to avoid facing the difficult truth. I am not asking you to be a part of my tribe. I do not have a tribe. Jesus is the way the truth and the life. None come to the Father except through Him but there are false christs in the world. There are false gospels and thus there are false conversions. The people you chose to share the stage with sell the world a false christ. Bethel's christ is rancidly false. Christina Caine's is equally rancid and false. So do not be confused Jackie. Freedom is not the issue. What you do with that freedom most certainly is.

'On Twitter, Perry explained her position more in depth. She says she was raised in a Baptist-Pentecostal context. When she got saved, she attended an Apostolic Pentecostal church and eventually started going to a Southern Baptist congregation, though she wouldn't call herself Southern Baptist. "It is in these churches that I've learned that the same people that I might find issue with doctrinally can still know God salvifically," she says. "... I know that those of us who are on the side of staunch biblical orthodoxy can also lean quite heavily on the side of lovelessness and arrogance. Criticism can be more practiced than love for some of us. It's become a sport in some 'discernment' centric ministries when in some cases it is purely a ministry built on judgment and criticism that's being masqueraded as obedience to Jude 3."' -- Jackie Hill-Perry

Sorry Jackie but that is a dangerous cop-out. I know you want to desperately make this about anyone but you. Yes there should never be arrogance or lovelessness when dealing with sheep but we are talking about discernment of false teachers. Jenn Johnson and Christine Caine are not brethren. The clear problem is you treat doctrine casually. Let me be clear again -- you cannot know someone salvifically who believes in false doctrine. That is why Paul warns Timothy to guard only his life and his doctrine.

'Perry clarifies that she does not in any way subscribe to Word of Faith teaching. In fact, she calls it "foolish and a distraction to the beauty of God and a misrepresentation of the gospel of God. ... Though I believe that the Word of Faith movement in and of itself is unbiblical, I cannot say, with a clear conscience, that someone that speaks with 'Word of Faith' language (because that's a thing) or a teacher that might ascribe to one tenant of the WOF movement but not all, is actually a false teacher. I believe there is a distinction between teaching falsely and being a false teacher."' -- Jackie Hill-Perry

The only difference is teaching something wrong allows you to repent and stop doing so. Once you chose not to, you are now a false teacher. Christian Caine has heard the criticisms and decided she knows better. She does not. Word of Faith is heresy, pure and simple. There is no such thing as a little heresy. Jesus warned that a little leaven eventually leavens the entire batch. Let us also be clear. Unless you preach the WOF doctrine, I would not call you WOF. The problem is in giving tacit approval to heresy. Not everything Joel Osteen says is heresy but you would not catch me retweeting anything from him no matter how correct because I do not want to lead anyone to him. That is the larger point you are missing in your mad dash to avoid responsibility. It isn't about you. It is about those you will lead to teachings you yourself admit are a misrepresentation of the Gospel.

Yeah Jackie, it kinda is. You are trying to escape through technicalities. Would it be worse if it were a Hillsong Conference? Absolutely but that does not mean this was still wise. Please go back and listen to the cries of this woman who spent 15 + years in the cult that is Bethel. It is an entirely different gospel Jackie. That fake gospel introduces a fake christ and that fake christ cannot possibly ever save you. These are the people in Matthew 7 saying Lord Lord. They are led astray and scattered from Christ by the likes of Christine Caine. You should want to have nothing to do with them. Lastly Jackie, regarding your friend Jenn -- preach the Gospel to her because she really needs it.

Credentialed Minister of the Gospel for the Assemblies of God. Owner and founder of 828 ministries. Vice President for Goodwill Industries. Always remember that in all things God works for the good of those who love Him and are called according to (more...)
Related Topic(s): Christianity; Faith, Add Tags