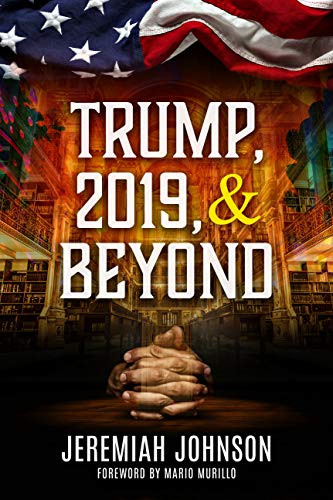 I have always been of the opinion that wolves do not decide one day to become sheep. They do not repent in other words and therefore the notion of praying for them as they devour our brethren never made much sense to me. So, every now and again I come across a piece of news that gives me hope that maybe I am mistaken. The headline of the article linked above over at Charisma News today screamed such possibility:

I was stunned. Blown away. Then I read the article. For the unaware, Jeremiah Johnson has been a false prophet for many years making his living off fleecing the flock of the Lord with the clairvoyance that passes for prophecy today. Last year he prophesied, as did all of the false Charismaniacal prophets, that Donald Trump would win a second term. As if going through the stages of grief, Johnson has seemed very unsettled at being wrong. He first lashed out. Then he apologized. Then he retracted the apology because the election was being contested. To his credit he realized claiming God somehow did not know about alleged voter fraud that led to a Biden victory would be an absurd sell, so he went back to contrition. Contrition of course is not enough so when I read the headline I screamed yes! Apologizing for misrepresenting the creator of the universe but continuing to misrepresent Him, is not enough! Maybe a wolf finally gets it!

Ending his ministry? Yes! That is where it must start if he would truly seek repentance. This would send shock waves throughout the false prophet industrial complex and all of purpose-driven-land. Maybe he could go on tour apologizing for lying about hearing from God and drive people back to the real God and the real Gospel. Then I read the article. He says some things right. Like needing to spend some time in humility. Then of course he says the secret part out loud when he bemoans the loss of money and influence this move will cost him. Then he announces the shift in his ministry efforts.

I thought you were ending your ministry Jeremiah? No beloved, not even close. Instead of falsely prophesying, Jeremiah will now open a new ministry effort called the Altar Global. When you click over to the start of that webpage you will see grand designs on a new ministry where he will provide gatherings for local churches and then to branch out to allegedly prepare the church for the second coming of Christ. So let me see if I got this right. The guy who claimed to hear directly from God the Father but still got a 50-50 prophecy wrong is now in charge of a ministry to prepare the church for the second coming of Jesus? Right. On his new page however he also is back to what he does best - fleecing the flock. To become a "partner" you must give at least $25 per month but in return you will get a monthly webinar call with Jeremiah Johnson himself! There he will be sharing behind-the-scenes information on the ministry, and an exclusive teaching that's available nowhere else! In addition you will also get 15% off on all regularly priced e-courses, resources, national Altar Conferences, and online/in person Altar School of Ministry! But wait! There's more! For becoming a sucker, I mean partner, you also get VIP seating, Meet and Greet, and 15% off the resource table at national Altar Conferences! Wow, that's a lot of nonsense from a completely new false ministry! Johnson is quoted from the Charisma article:

"I am not discouraged nor am I drawing back from my calling. Quite the opposite. I feel God is launching me, my family, and our ministry team further into His purpose for us. In response to God's gracious correction, refinement, and empowerment, I am choosing to refocus my gaze upon Jesus and the eternal realities of His Kingdom like never before." - Jeremiah Johnson

Yeah but you SHOULD have felt discouraged Jeremiah. That's the problem. You should have been discouraged to realize that you have no calling. God does not call someone then lie to him about what to say to God's people. That is not God launching you Jeremiah. Think logically and biblically for a moment please. You misrepresented hearing from He who spoke everything into existence! Why in the world would God then launch you into another ministry and ask you to try and make more money from His people? The simple answer is - He wouldn't.

I really wanted this to be a story about true repentance for realizing that apologizing is not nearly enough when you lie about hearing from God. As I read though it became clear that Jeremiah had just decided that the false prophet schtick was not worth the hassle of answering for when you are wrong. Now he gets to have his cake and eat it too. As discerning believers we need to realize that all he has done is trade in the false prophet title for a false teacher. Those two terms have always been interchangeable anyway. We need to read the key verse and mark Jeremiah Johnson as false and avoid him. Regardless of what false ministry he is trafficking in.