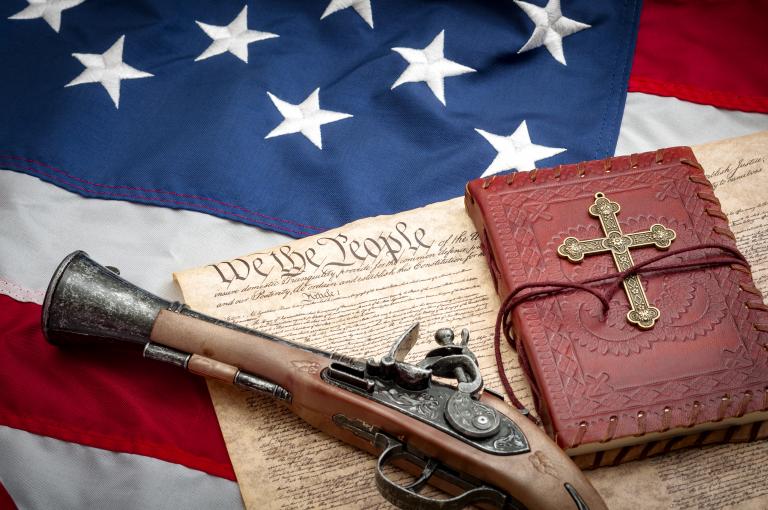 And I commanded, and search hath been made, and it is found that this city of old time hath made insurrection against kings, and that rebellion and sedition have been made therein. - Ezra 4;19 (KJV)

We highlighted the other day the beg-athon being held for something called the Victory Channel. After some more digging, seems this channel is the new exciting thing in NAR dominionism. It appears to be backed by Kenneth Copeland Ministries with direct involvement by notorious idolatrous pastors Mario Murillo, Hank Kunneman, and Lance Wallnau. Towards the end, at the 30-minute mark, the venue bursts into spontaneous worship. Not of God of course but of this country as chants of USA echoed to the rafters as the juiced crowd hooted and hollered. Dominionism is rarely short of enthusiasm. The problem is that it is not God they are excited about. Dominionism worships this country. For those in the power structure, such as Kunneman, Murillo and Wallnau, the niche they have carved out is intoxicating. Like the religious leaders in the days of Jesus, these charlatans have all of the prestige and power. They have the plum speaking gigs at conferences such as this and the lucrative book deals. They are obsessed with maintaining the gravy train and will leverage God any chance they can get to do so.

Here is the problem, however. God does not share His glory. He alone is God and He does not need our help. True dominionists actually believe that we need to conquer seven cultural mountains in order to facilitate the second coming of Christ. Did you get that? They think God cannot accomplish this unless we do something first. How arrogantly blasphemous. While some in the NAR focus on the cultural mountain of education or entertainment, it is government, or politics, that most obsess over. In order to achieve their minimal talking points, they are forced to butcher both the truth of scripture and the truth of history. In the second half of this clip we see an example of such butchering. Kunneman tells a story about a recent word preached by his wife and how in Ezra 4:19 the enemies of the rebuilding of the wall in Jerusalem called the workers of such "insurrectionists." The obvious reference being made was to the actual insurrectionists who stormed the US Capitol on January 6, 2021. These criminals have been lauded as heroes by dominionists. The problem here is on both sides. First of all, the people who stormed the Capital were violent criminals and should not be hailed by anyone, let alone Christians. There are multiple police officers dead as a result of the offenses committed that day. Besides that, Ezra 4 says no such thing as we see in the key verse today. Yes, the word "insurrection" does occur in the King James but it is in reference to the history of Jerusalem, not the current people trying to rebuild it. The rest of the conference is just more of the same. Extolling everything America and sprinkling in enough "Jesus'" to make it sound pious. What I want to focus on today is the introduction to the program. This was apparently produced by the Victory Channel and is just one patriotic visual after the other. Mom and dad wrapped in the American flag. Children playing with flag as backdrop. The bible wrapped in the flag. While over these images the following narration can be heard:

"Our God is a God of plan and purpose. His plan gave birth to a document. A document of this kind had never existed before in government ever. We hold these truths to be self-evident that all men are created equal. God has given priceless worth to every single individual born. For God so loved the world that He gave His only begotten Son." - Victory Channel Introduction

I want you to follow this line of reasoning closely because many of your church leaders today share such blasphemous theology. The idea that the Declaration of Independence was birthed through God's plan is absurdly heretical. This is how dominionists come to the erroneous conclusion that America was once under covenant with God and has recently "backslid." This is why they are constantly chasing a revival that the bible does not promise. They cannot even see the tragic irony in their quoting that the very people who penned that all men were created equal expanded slavery in their lifetimes. Priceless worth to every individual born? Except African slaves who were considered 3/5 of a person according to the Constitution. God however is not a respecter of person. He sent His only Son to die for our sins, not to favor one carnal country over another. The Victory Channel Introduction would now conclude:

The Constitution of the United States of America is so uniquely similar to and inspired by the bible. It is not mentally discerned but spiritually discerned. This is God's heavenly dream. We will continue to be, in every sense of the word, one nation under God. - Victory Channel Introduction

It is so sad to have to easily correct such dissembling. If it is "God's heavenly dream" to have America be one nation under God, then He has only been having that dream for 67 years and not for the first 212 years we were a nation. You see beloved, in the 1950s we had a president in Eisenhower that believed in injecting more religion into the public square. At the time we were in the middle of the "red scare", where unscrupulous men in power were constantly accusing innocent people of being "Communist." Eisenhower created the National Prayer Breakfast, created "In God we trust" as our national motto, and added one nation under God to the Pledge of Allegiance. That's right, one nation under God did not exist before the 1950s and was only introduced then as a backlash against the fake controversy of the red scare. Likewise, the Constitution is nothing like the bible and was most certainly not based upon it. The truth is that God is not even mentioned in the Constitution and the people who founded this country would probably not be allowed as members in Charismatic churches today. Some were Christians and some atheists. Many were deists, who believed in "a" God, but not Christ. Thomas Jefferson for example, rewrote the bible removing all references to the miracles of Christ and any reference to His deity.

Perhaps the most egregious thing mentioned here is the notion that our secular constitution must be spiritually discerned. That the Holy Spirit will lead you into all truths contained in the constitution. The inference of course is that God wrote our constitution, which He most certainly did not. God did not write that blacks were only 3/5th of a person. That kind of hatred exists solely in the wicked hearts of man. Beloved please remember that we are pilgrims and sojourners going through this world and our citizenship is only in heaven. During this broadcast they actually encourage you to leave your church if the pastor is not preaching politics like they do. The truth is the opposite. If you hear garbage like this in your church, you need to run away as fast as possible. These men are rank heretics who worship the sin and excess of their land more than they do their God. Wallnau is a renowned false prophet. Murillo recently wrote that anyone who did not vote as he did, was in danger of hell unless they repented! Evil, even if you think it is lesser, is always evil. These men are evil. This is not the church. Mark and avoid.