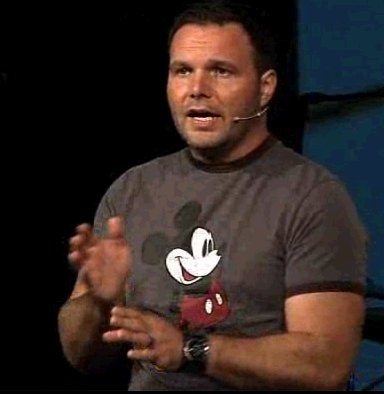 The truth is often stranger than fiction. When I saw the story about Mark Driscoll hosting a conference on biblical church governance I immediately thought it was another scathing satire from Babylon Bee but I was mistaken. Apparently Driscoll thinks enough time has passed since he destroyed Mars Hill Church in the most unbiblical manner possible and then fled church discipline by lying that God told Him to. Never mind the thousands of bloodied sheep he left in his wake. Many are still bleeding and never recovered from what Driscoll did. For the uninitiated, Mark Driscoll was once the brash face of the new young gun pastors in this country. Preaching in Micky Mouse shirts and torn jeans, Driscoll embodied the teachings of one of his mentors, Rick Warren. He was relatable and hip with a dash of inappropriate thrown in. He loved talking about sex during sermons, often in inaccurate and crude fashions.

As he grew Mars Hill Church (Seattle) into a mega church of over 15,000 attendees, he began spreading out and opening other sites. He became belligerent and authoritative in his management style. When discussing people who disagreed with him he once referred to them as a "pile of dead bodies behind the Mars Hill bus"; gleefully mocking the very people he had run over. He refused correction over and over again until the Acts 29 Network, which he founded, kicked him out. He stole 200,000 dollars from tithes to hire a company to cheat the NY Times Best-Seller list in order to say he had a top ten book. He once removed his board in order to replace them with sycophants who would never challenge him on anything. Ironically at the end that very board was going to sit him down, rebuke him, and provide a plan for restoration but Driscoll caught wind of it and simply walked away. He did so claiming God told him that a trap was being set for him and he should leave. To this day he remains a fugitive from that very church discipline despite opening his new church in Arizona. Every chance he gets he portrays himself as the hero and victim at Mars Hill. The damage he wrought was deep as the church imploded and dissolved and the ten thousand plus sheep scattered to the Christian landscape leaving a trail of blood behind them and the tire tracks of the Mars Hill Express across their hearts. With this as the backdrop, let us see how this seminar is being marketed:

"In an age of multi-site church planting, bad press for Bible-teaching churches, negative social media, lawsuits, disgruntled former leaders, and board conflicts, being a pastor is perhaps more complicated than ever. And too many times, church health is on the backburner, until a crisis happens. You're invited to a powerful one-day seminar that will challenge and equip you to establish a healthy biblical government in your church. The structure and function of a church's government ultimately determines its success or failure, and governance also determines the health and well-being of the pastor and their family. This is an opportunity to hear from pastors with decades of healthy church government experience, so you and your church can learn to truly thrive." -- Gateway Network

The Gateway Network is sponsoring this event and is headed by radical tithing heretic Robert Morris. Pastor Morris beats his sheep into submission by teaching they must give him the first ten percent or their money or God will curse all of it. The result is that Gateway Church raked in over 127 million dollars in 2016 alone. Hallelujah -- pass the offering plate! Morris was also instrumental in leading Driscoll back from the brink. When seemingly no one would get within ten feet of him, Morris invited Driscoll to speak at Gateway's annual conference and immediately reestablished his mega church street cred. We can tell from this blurb however that Morris and Driscoll are angling here for the pastoral victim mentality that Driscoll mastered when departing Mars Hill. Being a pastor is only complicated when we allow our flesh to drive us away from the Gospel -- period. Mark Driscoll became a millionaire many times over because of that arduous job he took at Mars Hill. While Morris wealth is estimated at over 11 million, Driscoll now sits at a mere 2.5 million after the debacle in Seattle. Still, this is someone who during the height of his "complicated job" was earning 500,000 dollars per year only to be given a $150,000 raise in 2014. Yeah that happens to all of us. We can relate. Note the focus here is on the health and well-being of the pastor, not the sheep. In order to achieve this pastoral Shangri-La, it appears you will learn how to stack your board to avoid conflicts like Driscoll did when he met with opposition. I have seen this tactic in local churches too as pastors desired yes-men instead of true accountability. I have watched pastors destroyed because they did not understand that a yes man is not beholden to you. They will say yes to whoever comes along. This seminar will also equip pastors with tools to manipulate social media and how to frame disagreement as someone simply being "disgruntled." There is nothing biblical about this beloved. This is the false authority paradigm that too many churches follow. If you do not have a servant's heart then you need to get out of the pastor business. This is not all you get for the $150 price tag however. Here are the covered subjects at this seminar in pastoral dominance:

A survey of Church governmental models

The biblical standard of singular headship and plural leadership

How to embrace apostolic influence

How to implement a God-centered theocratic Church government

This is straight up NAR-speak. Anytime leaders seem overly concerned with authority I cringe. As a former congregant of a church that was run by a rogue board that forced my pastor out I can testify to the damage power can do if your heart is not right. The replacement pastor and board were even more compromised. Stripping people of memberships after decades of loyalty, lying about other members to remove them from the fellowship and bullying the sheep that dared to disagree were just some of the "church governance" I witnessed. So forgive me if I do not embrace your "apostolic influence" or your "theocratic kingdom down faux unity" that forces dissent out through the purpose driven concept of "blessed subtraction."


The larger point is of course why anyone would have Mark Driscoll host a conference on how to govern a church when he has utterly destroyed one and is covered in the blood of his former sheep. Was Ted Haggard unavailable? Rob Bell too busy? I pray anyone foolish enough to attend this can see they are being taught unbiblical principles by unprincipled men. For the up and coming pastors if you are truly called then you must embrace the biblical notion of servanthood. Do not fall for the mega church lure and the purpose driven dreams of mansions and lucrative book deals. If that is what you are in it for then this conference may be for you after all . Morris and Driscoll can teach you how to rule with an iron fist and beat your sheep into submission until Jesus comes.


But then you will answer to Him.

The Value of Our Offense - The Cost of Unforgiveness (34489 views)

When Personal Worldview is More Important Than Truth (30886 views)