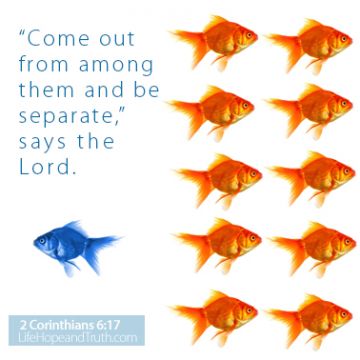 Therefore, come out from among them and be separate, says the Lord; do not touch any unclean thing, and I will welcome you. -- 2Corinthians 6:17 (ESV)

The Elijah List is a gaggle of false prophets who exist on the outskirts of the NAR. They are firmly entrenched in the false signs and lying wonders theology. One of their regular false prophetesses is Theresa Phillips. I refuse to call her doctor, because she "earned" her doctorate from the same diploma mill that TD Jakes got his from. Seems that Phillips recently "released" an absurd prophecy that actually reveals the opposite of what she hoped. She claims God gave her this word, which we know is untrue if we understand scripture. Thus the vision is demonic and actually reveals the plans of the enemy. Let us reason together through this brief false prophecy.

"I was in contemplation, very early in the morning, when suddenly I saw what appeared to be a funnel in front of me. Being a visionary it was not totally unusual, yet this was a moving funnel. I began to look closely at this and noticed it was a continuous funnel of angelic beings coming from the heavens. I was looking deeper and deeper into the vision when I saw chariots and horses. I wondered, "Could this be something new?" Instantly, I was in the atmosphere of angelic beings swirling all around me. I noticed many of them were wearing new, polished helmets. On the top of the helmets I saw that the word "SALVATION" was boldly placed. To the right were swords, to the left were shields, and in the center was a massive entourage of chariots swiftly pyramiding across the sky. The underside of each chariot had flames of fire, yet they were nondestructive." -- Theresa Phillips

Sure signs of the NAR false prophet paradigm are already on full display. The first is the appearance of gnosis, or hidden knowledge or revelation. The false prophet needs this to raise their nonsense to the level of scripture because after all, God is allegedly revealing this. She also tries to normalize what is an absurd situation by claiming the title of "visionary," which I can only assume means she regularly receives visions from God. The second NAR indication is the unbiblical obsession they have with angels. The object here is to give the appearance that she is special and we must listen to her as if we are hearing from the Lord. We do have to ask ourselves however, did God forget to tell us something in His word that He now needs to deliver through Theresa Phillips?

'"Lord help," I softly said, trembling at the presence in front of me. Then He spoke with such clarity. "These messengers are bringing new insights to the battles ahead. I am sending them as fire and light all across the nation. They will deliver revelation, and My people who are called by My name will UNITE for the safety of others. "I am going to send one of My archangels as the UNITER of denominations. Yes, I am about to cause a unity the world has not seen in decades. Archangels will be released in various places by the end of November 2019 and will stay on the continent of America for one year.' -- Theresa Phillips

So let me see if I have this right. God wrote the bible as His final revealed will and somehow forgot that in 2019 He would need to send an archangel to America for one year to unite previously disparate denominations? Yeah that makes no sense. What is more likely is that Theresa Phillips is a NAR false prophetess who cannot tell the difference between demonic visitations and angelic visions. We need to take notice of this though beloved because it is a message of unity that will be used to get millions to compromise the Gospel. These are the foundations of the one world religion the bible actually does foretell. The third hallmark of the NAR here is the focus solely on America, which is of course their idol. The dominionist theology of the NAR only sees things through the prism of carnal nativism. We can be assured of one thing as the end times darken. There will be unity amongst false doctrines comprising the apostate church, while the remnant of true believers will have to come out from among them as the key verse states. Paul was talking to the Corinthians Church about their penchant for idolatry and this applies to the church today as the NAR is pure idolatry. They idolize this country and this world over God. Never forget beloved that narrow is the way and few are those who find it.

We have seen this develop over the last few years. Rick Warren has reached out to Islam. Warren, Kenneth Copeland and many other false teachers have reached out to Rome. Those who resist will be accused of defiance and division. Phillips gives up the charade here by insisting that God said that He loves America. God does not. This is textbook NAR dominionist teaching. They pretend America was once under covenant with God and that if we can just convince the pesky little sinners in America to behave better, then God will stay His coming wrath. He will not though. America will be judged along with every other nation. It is important to stop and recognize that assuming Phillips is not lying abut this demonic vision, what she actually is revealing are the devil's plans for these end times. The enemy is rising up the one world church and denominations will fall one by one. The Assemblies of God is already on board through international partnerships with the like of Bill Johnson and Reinhard Bonnke. The SBC is already on board through the embrace of Christo-feminism and the Beth Moore drama. The apostate church is already on the rise beloved. Be forewarned and as was stated, come out from among them.

Credentialed Minister of the Gospel for the Assemblies of God. Owner and founder of 828 ministries. Vice President for Goodwill Industries. Always remember that in all things God works for the good of those who love Him and are called according to (more...)
Related Topic(s): Prophet; Religion, Add Tags