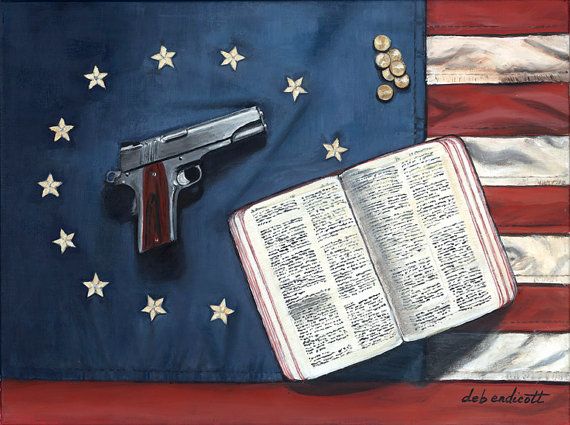 See then that you walk circumspectly, not as fools but as wise, redeeming the time, because the days are evil. -- Ephesians 5:15-16 (NKJV)

I am compelled to state up front that I do not want to see this country where all the guns are in the hands of a government so easily corrupted, on both sides. So, this is not an anti-gun sentiment. It is anti-stupidity. Well intended folks on both sides of this argument seem to think that it must be as polarized as our body politic. I remain naÃ¯ve enough to think that you can have rational discourse and a mandatory three-day waiting period before a five-year-old can buy an Uzi (name the movie!) all the while maintaining the second amendment. Now that the carnal stuff is out of the way, this is a devotional about the things of God, not man. With the shootings in El Paso and Dayton still in our minds and hearts, Stephen Strang has taken it upon himself to write another self-serving, shill piece for the NAR dominionists and wrapped it up in faux piety. So, let us reason again together beloved through the above linked article.

"The nation is still grieving over the two mass shootings in El Paso, Texas, and Dayton, Ohio, that killed 31 people and injured dozens more the weekend of Aug. 3. And of course, people wasted no time in politicizing the horrific events. Many blame gun rights and others say Donald Trump is at fault because of his strong rhetoric and emphasis on illegal immigration. But what those people don't realize is that the answer to mass shootings is not found in stricter gun laws or socialist policies. In fact, the real answer isn't political at all. What really needs to happen is a change of heart. And that only happens when someone surrenders to Jesus and begins a relationship with Him. This, of course, makes a lot more sense to Christians than it does to secularists. The secular world pays no attention to truths like this." -- Stephen Strang

People wasted no time in politicizing these events? You mean like writing articles such as this? You are the problem you protest Stephen. You offer up solutions even the bible says are not plausible and then stand back and act like you're a change agent? The fact is that the world thinks the things of God are foolishness to them. It is not a matter of attention. Please, while we are at it, stop the "socialism" talking point. It is not socialism to think that the mentally ill should not be allowed to purchase firearms. The truly sad thing we see here is the result of the NAR dominionism on the Gospel of Jesus Christ. It turns the people who need Jesus the most into the enemy. Only Satan could have devised such a scheme. Those socialists! Those secularists! They just refuse to pay attention to the truths of scripture!

"One thing several conservative commentators have pointed out is that passing more gun-control laws does not necessarily lead to less gun violence. Chicago is a good example of this. So is Paris, France. France has much more restrictive laws than the U.S. does, yet it has suffered some significant terror attacks in the last few years. These conservative commentators instead point to community and family as more viable answers to the gun violence problem. Now, even the secular world acknowledges that the breakdown of the home leads to all kinds of societal problems, including mass shootings. Just look at Baltimore. That city has been in the news lately, and a big part of the problem is that very few families in the inner city have a stable father. And sadly, men often leave women they impregnate out of wedlock, deepening the poverty issue even further." -- Stephen Strang

Wow, there's a smorgasbord of semi-racist assumptions and mischaracterization going on there. Pointing out that more laws does not necessarily lead to less violence is a vacuous point. Nothing necessarily leads to anything. That does not mean you do not try. That does not mean you don't come to the table admitting that maybe hunters don't need armor piercing bullets. The France point is meaningless. There are countries with even more restrictive laws that see virtually no gun violence. Instead of pointing to extremes can't we meet in the middle and say that maybe a background check -- however long it takes -- should be required before someone buys a gun? Is that such a crazy idea? The one person that may take 10 days -- their individual second amendment rights do not trump everyone else's right to make sure they are responsible enough to own the gun. Conservative commentators point their fingers anywhere else but on the guns themselves. I am more than willing to agree that we should look at mental health services, violent video games, a generation raised without social skills, and the elephant in the room -- psychotropic medication. But to pretend that guns themselves do not belong in the conversation is simply asinine. Or to point to inner cities recently maligned by the president is equally shallow and non-responsive to the actual problems.

"But in order to truly address this spiritual issue in our nation, Christians have to be willing to speak up. What has to happen before pastors and Christians in general will speak the truth without fear? Our country is in a crisis, and it's a crisis only God can solve. Granted, many Christians don't speak up because they don't want to face the attack the left will swiftly bring. Sarah Sanders, Mike Huckabee's daughter, was harshly attacked when she worked as press secretary. Secularists just didn't like the fact that this woman who has biblical values and comes from a strong Christian family held a position of influence. People even came up to her in restaurants to hassle her. We as Christians have the answer to the intense spiritual warfare our country is facing right now. The mass shootings are just a symptom of the spiritual attack America is under. We have the Holy Spirit, and because of that, we have access to His wisdom. All we have to do is ask. We can pray for open doors and for strategic things to happen in our nation that will cause the pendulum to start swinging the other way. It can happen--if we pray." -- Stephen Strang

Here is where Strang leaves reality and any hope of sound doctrine behind. He presents a binary choice that is not rooted in scripture at all. His presented choice is not good and evil. It is not right and wrong. It is right and left. To the warped NAR mind, there are two sides -- the GOP and the Democrats and the GOP is righteous while the dems are evil and from hell. Sarah Sanders was criticized not for her biblical values but for professing them while lying through her teeth. This is the part Strang and the NAR do not get. The Sarah Sanders of the world ruin the witness for Christ. Jesus speaks at length about hypocrisy Stephen. You should really read up on it. Because when you don't you drift off into carnal arguments and cannot see the truth. The church has failed and that is why the country is in the spiritual state it is. The church has spent the past few decades imploring the world that we are relevant to them. That we are just like them and now -- we are. When the church reacts to a mass shooting to defend the NRA we know it is just because of the NAR. When we choose sides and declare the other side evil, we are doing the work of the enemy. We cease being salt and light and a shining city on a hill when we insist on carnal arguments to defend carnal practices while sprinkling in some faux piety. Remember the key verses beloved. we are to walk as wise, not as fools and because the days are evil we are to redeem the time. Stop blaming the very people who need the Gospel the most. A shooting is a tragedy for the victims, not the gun lobby. When you are not busy worshipping this country, the NRA or the NAR, these things become biblically clear.