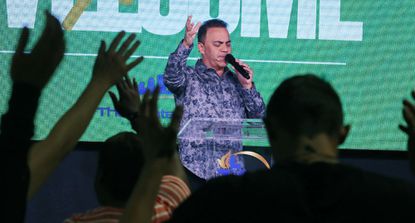 There is a perfect storm brewing in the American Church today. We have a deadly, vicious virus running through the world that has already claimed the lives of 70,000 people with over a million infected worldwide. The best way of fighting this virus to minimize further infection and loss of life is for people to not gather together, where people can easily spread it. This is especially true given that people can walk around infected and asymptomatic for weeks, infecting all they come in contact with. The second factor is the end result of decades worth of purpose driven theology infecting pastors across this country. The purpose driven church model centers on a cult of personality preacher and teaches them that they are of the utmost importance. This has created a siloed church, where congregants believe church is the building they visit every week instead of the body of believers. This mega-church mentality creates the illusion that true church can only occur if 1000 are gathered in his name instead of 2-3. The third factor is the NAR dominionist infection that has been polluting the church for decades now. Instead of seeing things in eternal terms of the kingdom, they only measure things in the carnal metrics of this world. These three factors are now combining in a deadly force where local pastors are now mounting a rebellion against authority to hold their church services and potentially kill their congregants and their loved ones. Consider the four stories we already knew:

An Illinois church held a gathering on March 15 to hear a guest speaker. Even though this was prior to the orders against public gatherings, 43 of the 80 people who attended are now sick, with at least 10 being confirmed with COVID.

Pastor Rodney Howard Browne violated his county ordinance against gathering and held church service last week with hundreds in attendance. He was rightly arrested and has brought in the NAR legal arm, The Liberty Counsel, to challenge the order federally. It is too early to determine how many people will be sick or die from this decision.

Pastor Tony Spell of Louisiana held service as well, violating his state's orders. Spell and Browne used their pulpit time to preach against the government instead of preaching the Gospel.

Pastor Landon Spradlin of Virginia decried the COVID fury as a plot against the president, went to New Orleans to "cleanse it of its sin and debauchery"; caught COVID and died on his way home.

You would think this would be enough for pastors to break free of this storm to realize that their church building is not the actual church. To realize that the lives of their congregants should be the primary concern as their shepherd. Yet with each passing day there are new reports of different pastors following suit and jeopardizing the lives of the very people they are supposed to care for. Pastor Jack Roberts of Kentucky said he would rather go to jail claiming the ban violated the first amendment of the constitution. He is mistaken, as was Browne who is arguing the same thing. In 1905, the Supreme Court ruled on this already in Jacobson vs. Massachusetts. The state is allowed to impose its will against personal freedoms in the case of the public good as long as that will is not discriminatory. For example, if the state order said only Christian churches cannot meet, then it would be unconstitutional.

Then there is the case of Pastor Rich Vera of Orlando Florida, who held service in Center Arena in Orlando. During the 90-minute service it is reported that frequent "give now" messages were flashed on the screen with PayPal and Cashapp options. He told his followers that those who have negative comments should mind their own business. Sorry pastor, but the sheep of the Lord do not belong to you. It is entirely the business of the body of Christ to rebuke you before you cause any more to be infected and potentially die. Vera told the crowd:

Says who? You? What unbridled arrogance. This is not a matter of being "chicken." It is a matter of being a moron. As a pastor, you lead sheep. You directly influence what they do and believe. I cannot begin to fathom the damage Vera has wrought upon his sheep by preaching this garbage. This goes out to all of the other enablers out there too. Stop talking about stupid conspiracy theories and NAR talking points. If you are not part of the solution, then you are part of the problem. Shut up and quit being part of the problem. Do not think that God will not hold you to account. The presence of God is anywhere we are, not in Rich Vera's church. There is nothing special about his church or any other. They are buildings that one day will rot and crumble. We are the temple of the Holy Spirit -- not Center Arena. This is the EXPRESS time we should be worshipping online. It doesn't feel the same? Get over it. Get over yourself. Think about someone else for a change. The Florida coronavirus will not reach its peak until well into May and the Rich Vera's of the world are guaranteeing it will be far far worse then it had to be.

It does not take faith to act reckless. It does not take piety to act stupid. These are not profile in courage. They are profiles in the arrogance that thinks their church is so darn special that is must meet even in the middle of a pandemic. They are profiles in recklessness, as they are people who simply do not care how many people they will make sick and cause to die. Make no mistake about it. Rich Vera, Jack Roberts, and anyone who cares this little about God's people will all have blood on their hands when they stand before Christ. The worst part is right now they actually think they will be commended for it! This is how the NAR dominionism warps the mind. They think standing up to the contrived "deep state" is more important than the lives of those entrusted to them. These are profiles in utter, mindless, stupidity. In this age we see churches livestreaming services, sermons and even worship. I have a prayer meeting every Friday night through Skype. When the church first started it met house to house. Underground churches today throughout the world meet house to house. Yet to these stupid, reckless and arrogant men, it is more important to hold service, thumb their nose at the government, and ultimately kill their sheep. They are not pastors. They are products of the perfect storm of Purpose Driven heresy and NAR slop. They are the hired hands the key verses speak of who care nothing for the sheep. They should be treated as such.