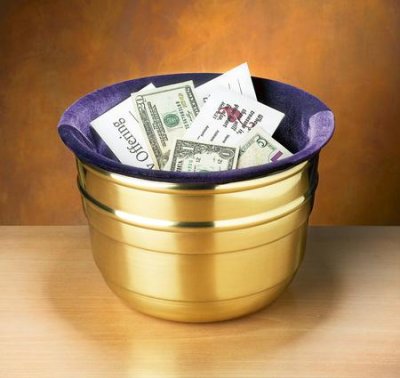 So I exhort the elders among you, as a fellow elder and a witness of the sufferings of Christ, as well as a partaker in the glory that is going to be revealed: shepherd the flock of God that is among you, exercising oversight, not under compulsion, but willingly, as God would have you; not for shameful gain, but eagerly; not domineering over those in your charge, but being examples to the flock. -- 1Peter 5: 1-3 (ESV)

Beloved every now and again a renowned wolf appears just long enough to say something so absurd that I have to stop to acknowledge the insanity of it and then quickly move on. Pastor Robert Morris is one of the most egregious tithing whores on the planet. He has written books about how much you need to give him your money. There is not a scripture he is not willing to twist and mangle to separate you from your money in the name of Jesus. The key verses today list some things pastors should not be doing and the portion that says they should not be a pastor for shameful gain was written for men like Robert Morris. With that as the backdrop I have linked above a video clip but really all we need is in the summary provided by the Charisma Cesspool:

Gateway Church Pastor Robert Morris says that when believers act arrogantly and walk in pride, they become satanic like Satan. In a sermon video clip, Morris says, "Please hear me. Pride was the original sin by which Satan fell. I'm going to make a pretty strong statement here. You are the most like Satan when you walk in pride. Another way to say it--and again this is going to be strong, but I'm just using grammar here, but this word is pretty strong--but it is satanic, which means like Satan. That's all it means, but we know that's a strong word. It's satanic to be prideful. You're the most like God when you walk in humility." Morris also adds that Satan uses lies and deception to lure Christians into spiritual bondage. "The only way Satan can take you into bondage, the only way, is to get you to believe a lie," Morris says. "That's it. If it's going to happen in your marriage, he's going to tell you that you're not right for each other. You're not meant for each other. You rushed into it. ... If he's going to take you into bondage, he's going to deceive you, and the way he deceives is he lies." --Robert Morris

This is truly how Satan operates beloved. Just enough truth to lure you in but we must examine the entirety of Morris' teaching in light of these revelations he is sharing because God can use our own stupidity to expose our sinfulness. So when Robert Morris says that the enemy will take you into bondage by deceiving you I wonder if he was thinking about this example:

That is NOT what the bible says beloved. That is what a tithing teaching whore like Robert Morris says. This is what is meant when the bible warns about people who will make merchandise of the sheep. God is so good though because He will always bring to light and expose what is not of Him. Morris is right in that the lies he preaches about tithing will lure you into bondage with Satan. Absolutely. What he preaches is pure evil. That God does not want you to pay your bills or even buy food until He gets His cut. Morris turns God into a bloodthirsty gangster who is waiting to whack you if you do not pay His protection money. Perhaps worse than the gangsters of lore like Al Capone, the God Morris sells goes beyond merely not blessing you. No, Robert Morris' god will actually kneecap you too! Your money will actually be cursed by God if you do not pay up! I know loan sharks that are more forgiving.

The notion that God wants you to be so irresponsible with money that you end up sitting in the dark with no food as they come to evict you but at least you paid Robert Morris is absurd and spiritually criminal. He teaches here the dire importance of humility in your walk but has none for his own. In 2016 Gateway Church brought in over 127 million dollars. I wonder how many foreclosures there were to reach those numbers? How many shattered faiths? Beloved God loves a cheerful given and there is a universal principle of sowing and reaping which goes far beyond money. If you find a church that is truly preaching the Gospel of Jesus Christ then you will not find a better place to invest your money. If you give to a snake oil salesman like Robert Morris however just remember that you are buying your way into bondage to Satan. That is what Robert Morris himself taught and ironically, he got that part right.