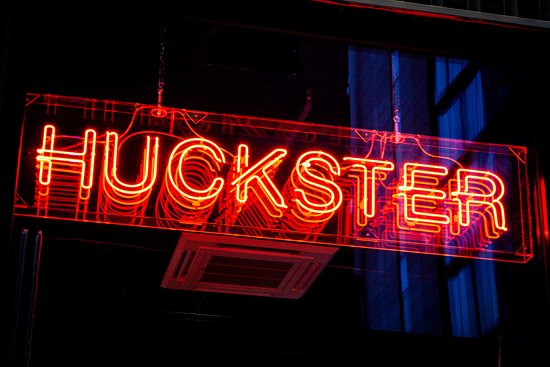 But thanks be to God, who in Christ always leads us in triumphal procession, and through us spreads the fragrance of the knowledge of him everywhere. For we are the aroma of Christ to God among those who are being saved and among those who are perishing, to one a fragrance from death to death, to the other a fragrance from life to life. Who is sufficient for these things? For we are not, like so many, peddlers of God's word, but as men of sincerity, as commissioned by God, in the sight of God we speak in Christ. You see, we are not like the many hucksters who preach for personal profit. We preach the word of God with sincerity and with Christ's authority, knowing that God is watching us. -- 2 Corinthians 2:14-17 (NLT)

Tucked away at the end of the second chapter of the second letter to the Corinthian church we find a small discourse from the Apostle Paul regarding money and those who bring the word of God. Now mind you, Paul has taught that preachers are worth their wages even though he himself never took money for his services for the kingdom. There is of course a vast difference between being worth your wages and creating a ministry designed to rob the people of God for your own personal gain. Paula White for example has made five million dollars scamming the sheep. Kenneth Copeland actually brags that he has personally stolen over a billion dollars from God's people. Needless to say their collective destruction is not idle nor asleep. Before unveiling the anatomy of such scams, let us briefly review what Paul has said, and thus what God has said on the matter.

Paul uses metaphorical language here to describe the process of spreading the Gospel. It is represented as the fragrance and knowledge of Christ. We who carry the Good News are the aroma of Christ for both the saved and the unsaved. This is why those who present a false gospel are considered so odious. They are a stench in the nostrils of God. Paul gets into specifics here about those who preach falsely for financial gain. He refers to them as hucksters. The bible defines a huckster as someone who sells something of questionable value. In the case of the prosperity huckster, there is no value in the wares they peddle. It cannot save a single soul. The true bringer of Good News has three defining characteristics. The first two are they are sincere about the Gospel and they preach with God's authority. The third is that they have a fear of God because they understand He is watching. When I watch a Benny Hinn, Mike Murdock or Kris Vallotton the unifying attribute they have is a complete and utter lack of the fear of God. I say this as the backdrop to reviewing a short article linked above from Pastor Dennis Funderburg. Let us reason once more together.

The first card usually played by the huckster is the "it's not about money" card. As they are saying this they already have one hand in your wallet. Trust me, it is always about the money for them. The reason they say it is not about money for you, is to protect themselves when you realize you have been scammed. If someone comes back and says their "seed" never resulted in their "harvest" then the huckster will immediately go back to this declaration. The idea they are trying to plant in your mind is that anything positive in your life is a direct result of giving them money. So while they infer money they are also laying the groundwork for being able to say you still prospered even though your house is still in foreclosure. I remember a Facebook post on Joel Osteen's page from a man who was having his house taken by the sheriff's office in two weeks. He seemed genuinely confused because he had always faithfully tithed and gave regularly above his tithe as instructed a cheerful giver was supposed to. As sad as there being no substantive help from Osteen, the responses from his followers were abysmal. They were either regurgitating Christianese motivation or blaming the victim for a lack of faith.

The other obvious thing to point out is there is no such thing as a "poverty spirit." This scam is routinely operated by the hucksters in the church. They try to take their carnal greed for cash and turn it into a spiritual warfare issue. One of the rules of spotting doctrinal error is testing whether the proposed doctrine would work elsewhere in the world. Does Dennis Funderburg actually believe that the impoverished church hiding underground in China are just suffering from a poverty of imagination? Maybe the poor Christians being beheaded in the Middle East just accept their lack too easily. Why don't the persecuted Christians in the Sudan aspire to an "ascended" lifestyle? Oh those poor Guatemalan Christians! If they could ever get over their poverty of courage. These notions are not only silly they are disgustingly insulting. They are a stench.

"One key to breaking off a spirit of poverty is by becoming more generous, Funderburg says on the Jesus Is Still Jesus podcast on the Charisma Podcast Network. However, we have to be careful that what we're asking from God is for the purpose of giving Him glory. We have to ensure that we're not becoming materialistic or desiring praise from people, Funderburg says. "To me, this isn't a name it, claim it kind of faith," Funderburg says. "This is through my intimacy with God, through my love with Jesus, my relationship with Him. I accept His promises ... allowing my character, my humility, my discipline and my patience to be subjected to God's will." -- Charisma News

This is the piety-speak that many more savvy hucksters are using. Most people are on to the schemes of Mike Murdock and the sowing-reaping twisting of God's word. So slick hucksters interject things that sound pious and spiritual but again are just cover-speak for what they are essentially asking for and that is money. Instead of the brazen -- God wants you rich" promises, this appeals to the believer who wants to feel as if their giving draws them closer to God. The punch line not spoken here is Funderburg believes the will of God is always the abundant mindset! Sometimes God does not provide riches and wealth. Sometimes there is human suffering in a sin fallen world. This theology is sick and rancid. It is not presenting the aroma of Christ at all. Rather it has a certain sulfuric odor to it.

'"So many times, we ask for things we want from God, but it's not necessarily going to help us for a godly life. And that's why if you name and claim it for a Lamborghini, I'm not saying the Lamborghini is bad--but if that's all you're after, if that's the intent of your heart, is it actually going to help you live a godly life? When we become so focused on wanting to please Jesus and wanting to fulfill our calling, and we take the actual steps of faith to do it, that is where we're going to find provision; that is where poverty will not ever, ever be able to touch."' -- Charisma News

Yeah, no Dennis. The people in the underground China church are renowned for their faith. Imagine the faith it takes to accept beheading rather than renounce Christ. These people live their lives to serve Jesus. They do so without expecting anything. They realize their reward is in heaven. Yet poverty touches them Dennis. It touches every aspect of their lives yet they persist in Jesus. They have found true contentment as Paul wrote about. They do not lack courage. They do not place God in a box. They are not trapped in a lower form of being Dennis, you are. You are a lower form of being that preys on the religious faith of those who do not know better. To squeeze what money out of them you can. The odor you carry is of the devil and a stench to God. That is because you have no fear of God.

One day you will.