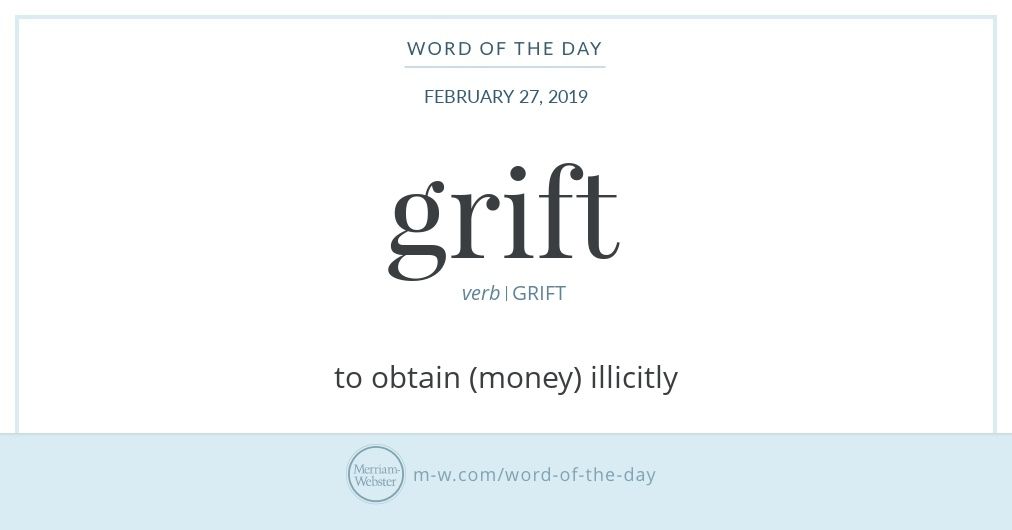 In the days of America's expansion westward, came the advent of snake oil. Claiming it could cure everything from common back pain to more advanced medical maladies, snake oil was often sold as a miracle cure for whatever ailed you. Of course, it could not deliver on any of the promises it made because the person selling it to you was a con man. A hustler. A grifter. This term grifter gave way to the newly anointed, "snake oil salesman"; to define those who would sell you the promises of the world. The bible has a term for people who hide behind the word of God to perpetrate a grift. The key verse refers to them as hucksters. Mind you, the issue is not merely "preaching for profit"; as we know that the workman is worth his wages. No, the issue is those whose motive for preaching is profit and thus have no sincerity, no authority and no fear that the Lord is indeed watching them.

There is however an art to the Christian grift just as sure there is an art to the con man playing three card monte on the street corner. The Christian grifter must maintain the appearance of piety in what they do. They must not only convince you that the snake oil will heal you but that God has orchestrated the entire grift. Enter premier Christian grifter Jennifer LeClaire. Mind you, LeClaire is rather obvious to those who can discern. She is of course the source of the sneaky squid spirit theology and has claimed to be able to release hoards of angels upon us for financial gain. Her true grift is in the hubris she brings. She never seems to care that all one needs to do is visit her website to see the scope of the grift in action. You see, Jennifer fancies herself a prophet so she has started a "network." You can get in on the ground floor of this network for hundreds of dollars. This provides you with prophetic street cred as you pretend to be submitted to authority. Several years ago however, Jennifer stepped up her game to the realm of false teacher because there was where the bigger bucks lay waiting. The grift evolved from developing a network to writing short books that could be sold with webinars that appealed to the fleshly desire of those in the apostate church to have power and position. So, for the right price, you could join her school of the prophets. After she milked this cash cow for all she could, she created a new niche called "seers." A seer is basically a prophet but somehow dreams are woven in. Misusing scripture, Jennifer convinces people to part with their hard-earned money to be trained to be seers. I kid you not. She also has side teachings on how to cleanse your house of demons and how to drown marine demons, seriously. It is a no-brainer for the huckster as she just makes the video and resells it forever on her site.

Apparently, the grift is running behind again so Jennifer has dug into the bible to again pull out something she can twist way beyond the intent of God. This time, Jennifer wants to teach you to become a "watchman." This is the art of the grift in action as LeClaire takes a perfectly benign biblical concept and mangles it beyond recognition before repackaging it for sale. The cost for this teaching is a mere $179 and $189 if you want the book too. Here is how Jennifer markets it on her website:

"After Chuck Pierce prophesied a new watchman movement, I spent a year teaching people in London how to operate in the watchman anointing. Then I developed this course. If you want to understand the times and seasons " If you are tired of getting blindsided by the enemy " If Jesus' words, "watch and pray" inspire you " this course is for you. If so, this course is for you.

While many people reject watchmen, God is putting a spotlight on this critical ministry of both warning and hope. In the Walking in the Watchman Anointing course, I am sharing scriptural revelation and practical experience over two decades of standing in the office of a watchman in the nations. You will learn how to operate in this ministry to see what the enemy is doing and announce the coming of the King." - Jennifer LeClaire

The concept of watchmen is perfectly biblical, which is what Jennifer is relying on. The part that is not however is the notion of needing to be trained for it and of course the associated price tag. There is of course no such thing as a "watchman anointing"; as Jennifer is just playing the huckster. She is packaging her latest snake oil hoping that unsuspecting consumers would not bother to use discernment. She is even selling watchman tee-shirts to complete the deal. The various video lessons include:

The Rise of the Watchman

Discerning the Call of a Watchman

The Role of a Watchman

Watching for the King of Glory

Sounding the Alarm and Blowing the Trumpet

How to Watch and Pray

Who can forget the biblical passages dealing with watchmen engaging angels and demons? Who has not wondered how to sound the alarm and blow the trumpet? Who has not squandered the day away waiting to understand how to "activate" the watchman inside of us all? This is all of course, ridiculous. Jennifer knows none of this as she has made it all up. Like all of her fake schools before, she will sell this to you right out of her hotel room at the Fort Lauderdale Airport and laugh all the way to the bank. If we were truly watchmen, one of the first things we would be on watch for would be Jennifer LeClaire. Watch, mark and avoid.