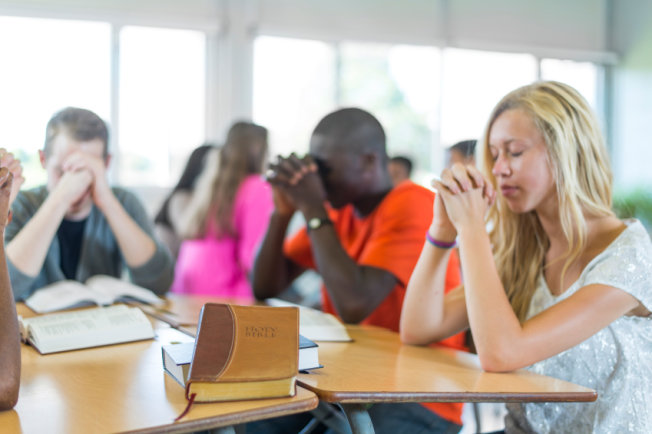 It has been a popular refrain from the church for decades now. God is no longer allowed in public schools. You have all heard that before I am sure. The talking point is of course ridiculous. I can picture God standing outside a school lamenting that He was NOT ALLOWED in the building. The creator of the entire universe, barred entry by politicians and school security guards. What an impotent god they portrayed. This is at the heart of the NAR seven mountains heresy. They do not follow the one true God, whom man could not ban from anywhere in His creation. They follow a weak god that needs our help. The original premise of the seven mountains was that Jesus could not even come back until we conquered the seven mountains! The true goal of the NAR and conservative politics as to create a generation of victimized Christians who have been somehow persecuted by liberal values in this once glorious theocracy known as America. To that end, they have performed spectacularly as the apostate church today careens from one victimhood to the next within the public square. So what really happened then? Where did this absurd talking point come from?

It happened in 1962, when the Supreme Court ruled that the government could not create prayers for students and force them to recite them. Whenever you hear God is not allowed in schools or prayer is not allowed, this is what they are referring to. The truth is that Christians should not be interested in the state forcing anyone to pray because while today it may be a Christian prayer, tomorrow it may not be. The truth is that prayer by individuals, having no coordination with the state has always been allowed in schools. Students are allowed to pray in public as long as it does not infringe upon anyone else and they are free to organize prayer groups and religious studies.

So what did the President do yesterday regarding prayer? Nothing. He reinforced what was already the law. He asked federal agencies to review and make sure they are not violating current law. That's it. He also did this when he clearly needed to shore up his evangelical vote during the same day that his impeachment started. Now, I do not mind the naked politics of it. I just wish that people who consider themselves Christians would know when they are being patronized and used. It was like when he ran on repealing the Johnson Amendment and then once elected changed his course to simply say he would not enforce it. Now, I do not think changing this amendment is good for the cause of Christ anyway but most churchgoers have been duped into thinking he has actually changed it when he has not. Any future president can simply start enforcing it again should they desire.

So, is prayer allowed in school today? Yes and it always has been. Christianity is not persecuted in this country. Go to the Middle East or China if you want to see real persecution. Go to the Sudan. Stop playing the victim. Stop being duped and used as political pawns for these carnal politicians who could care less about the cause of Jesus Christ.

Credentialed Minister of the Gospel for the Assemblies of God. Owner and founder of 828 ministries. Vice President for Goodwill Industries. Always remember that in all things God works for the good of those who love Him and are called according to (more...)
Related Topic(s): Christianity; Evangelical, Add Tags
Add to My Group(s)
Go To Commenting
The views expressed herein are the sole responsibility of the author and do not necessarily reflect those of this website or its editors.