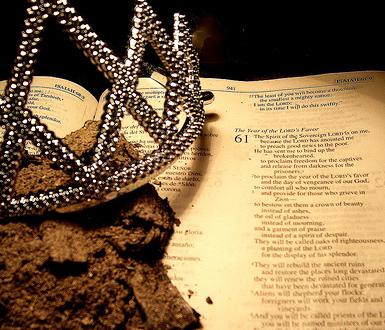 The Spirit of the Lord God is upon me, because the Lord has anointed me to bring good news to the poor; he has sent me to bind up the brokenhearted, to proclaim liberty to the captives, and the opening of the prison to those who are bound; to proclaim the year of the Lord's favor, and the day of vengeance of our God; to comfort all who mourn; to grant to those who mourn in Zion-- to give them a beautiful headdress instead of ashes, the oil of gladness instead of mourning, the garment of praise instead of a faint spirit; that they may be called oaks of righteousness, the planting of the Lord, that he may be glorified. -- Isaiah 61: 1-3 ESV)

A reader from my ministry recently wrote me and asked me to listen to a sermon from his church to get my read on the accuracy. I do not want to get into any detail about our private conversation but did want to highlight one concept the preacher used that highlights the crossroads between good intentions and bad theology. We must always proceed from the notion that God is trying to say something to us whenever we crack open the holy word. Preachers are supposed to relay to us what God has spoken to them through the normal process of prayer and exegesis. The problem today is that most purpose driven preaching starts with an idea the preacher has and then he strip mines the bible to find any verse fragments he can twist to make his preconceived points sound biblical. That is not God speaking. That is thus sayeth the pastor.

So the message in question was a Christmas Eve message. It was supposed to be a message about joy and given the time of the year -- I get it. I am only going to analyze the opening point. The preacher refenced Isaiah 61:3 as a prophetic word for what Jesus was going to come to earth to provide for us. So the preacher concluded, everywhere there is a pile of ashes in your life, Jesus came to make them beautiful. Now I understand most would view this as innocuous. It is very much encouragement on an Osteenish level. Oh what's the big deal; after all it was Christmas Eve! First, we must understand that false teaching spreads like sin. Jesus warned about it by referring to it as leaven which eventually spreads throughout the entire batch. Compromise begets compromise. Today it is one small allowance for Isaiah 61:3 and tomorrow you will be convinced that we have the same creative powers through our spoken word as God has. More importantly, the truth about what God actually has to say is always so much better than what we have deemed "encouraging." So let us dissect the key verses today, which include the immediate context for Isaiah 61:3.

Now the preacher is right that these passages are prophecy of the coming Messiah, spoken by Jesus Himself. This is the same passage Jesus would speak centuries later in the synagogue. The preacher of this sermon was so focused on this world that he misses the entire point of the scripture. Jesus came to deliver us from sin. All of these maladies He lists are related to sin and what sin does to the human condition without a Savior.

Sin breaks the hearts of man. Maybe not consciously but think back to before you were saved and remember that happiness was fleeting at best. This world is depressed and over medicated. Jesus however came to bind those wounds. Next are two promises regarding sin's imprisoning effect on mankind. Before we were saved, we were totally bound by sin. Jesus first comes to proclaim liberty for those held captive. That means He gives us the reason and rationale for why we are now free. It is because of His life and sacrifice that we are freed. Second, He literally opens the doors to the prison of sin. He takes our place for due punishment. Hallelujah!

Next, Jesus addresses the end game. He proclaims the year of the Lord's favor, which relates to His first coming. That the grace of God is now extended to all of humanity. Realize however that this period of grace and favor does run out and so Jesus also declares the day of vengeance of our God. Why? Because God is just beloved. That is not a mean word. That is an encouraging word because we are still in the year of grace and favor! It is only discouraging to those who have no intent to repent. So we come to verse three, which the preacher tried to leverage to encourage people that God will make your ash piles beautiful in this life.

Verse three however starts by saying these things are being provided for those who mourn. Sin cause grieving. Sin causes mourning. Now watch carefully. In exchange for the temporal mourning of sin, Jesus comes to give us the beauty of eternal life. The word beauty here is translated as "diadem" or crown. In exchange for the perpetual grievance and sadness of sin, which can only result in eternal suffering, Jesus comes to take that away and give us a crown of life He only describes as "beauty." Instead of that mourning and faint spirit that sin always provides, Jesus will give us an oil of gladness and a garment of praise. Oil was used to anoint someone consecrated unto the Lord. Now we are no longer bound by sin and instead have had His oil of gladness poured over our head to signify we are anointed in Him. We are His. As a result I will not merely praise Him but I will wear those praises. They are a garment that protects me from the elements of this world and comforts me when the world seems too harsh. Are we getting the eternal picture God has drawn for us here in Isaiah 61?

Let us never lose sight of the reason for these wonderful things God does for us. So that we might be called oaks of righteousness. Not by a world that could care less but by God Himself. That on that day of vengeance, God will only see the blood of His Son. That we would be a planting of the Lord! A planting grows beloved! It no longer withers and dies because our roots are now in Christ having been grafted into the vine. All so that God might be glorified! How is God glorified by these surpassingly great revelations? Because we deserved none of it. This is entirely a supernatural act of God. His love, grace and mercy. Now that we have better grasp on these three verses, let's return to how the preacher used them:

"Every place in your life that seems like a pile of ashes, you're going to get beauty because that is why He came."

No, that is not why He came. I understand good intentions but this preacher's focus is on this world. He seeks to provide encouragement for this world. This is the same thing that is wrong with political dominionism in churches -- the focus is on this world. It is the same thing wrong with word faith or prosperity gospels -- the focus is on this world. It is the same fundamental error made throughout churches across this world every day. You can encourage someone for an hour on Sunday but they still go home bound by sin. Imprisoned by sin. Depressed in sin. They do not need a temporal reprieve -- they need an eternal assurance. That is the Good News! That is the Gospel! You can keep your well-intended sermon points that provide no eternal value. You can keep your promises of temporal wealth, carnal signs and wonders or what man-made political system you think is the lesser of two worldly evils. They are not why Jesus came to earth. He came for so much more. The truth of what God has to say is always so much better than whatever it is we think we need to say. Just a closing word of warning. These trends are only going to get worse as the end times deepen. It is this earthly focused preaching that was the staple of the purpose driven movement and it will lead directly to the one world religion. Where we can all sing Kumbaya and love each other with a sloppy agape we have developed over the decades. The true remnant will face true persecution. Not for insisting on morality in our laws but rather for demanding biblical accuracy in our preaching.

Credentialed Minister of the Gospel for the Assemblies of God. Owner and founder of 828 ministries. Vice President for Goodwill Industries. Always remember that in all things God works for the good of those who love Him and are called according to (more...)
Related Topic(s): Faith; Religion; Spirit, Add Tags