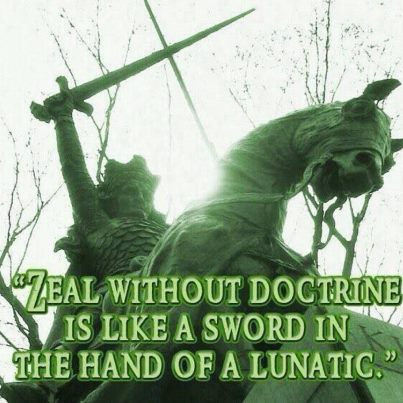 Where to begin? The New Apostolic Reformation has several planks to their theology, one of which is the heretical seven mountains mandate. This false teaching says that the church must conquer seven cultural mountains in order to facilitate the second coming of Christ. Now, some in the NAR refuse to admit this far end of the teaching but still try to teach dominionism, which is essentially the same thing. That the church has to take dominion on the carnal earth. It is nothing more than the idolization of this country and the sin excess it allows. Any day you can turn to "Christian" news and see this NAR influence everywhere. It is always couched in needing "revival", but the foundation is theologically bankrupt. So, let us turn this week to two stories I found interesting to highlight these issues.

The first link above is to a recent article by Eddie Hyatt. Eddie publishes his work over at Charisma News and when he is not mangling the bible to advocate for women preaching he is mangling United States history to push the NAR dominionism. Hyatt opens by recounting the story of Elijah and the prophets of Baal on Mount Carmel. He correctly points out that Elijah first had to repair the torn down altar of the Lord but tries to mingle in today's political issues:

"When Elijah's time came to pray, there was no such hype. His first act was to repair the altar of the Lord that was broken down (1 Kings 18:30). It was broken down because the Israelites had compromised their faith. They had mixed the worship of Yahweh with the worship of Baal. They had become religious pluralists--multiculturalists. An altar is a place of consecration--a place of sacrifice where one is given completely over to God. Consecration was absent in Israel. They had broken the First Commandment, wherein God had said, "You shall have no other gods before Me. ... You shall not bow down to them or serve them" (Exodus 20:3-5b)." -- Eddie Hyatt

Ok, the people of Israel became idol worshippers -- not religious pluralists and multiculturalists. What Eddie Hyatt is trying to do is take the terminology of today's politics and apply it to Israel thousands of years ago. It is silly and transparent. He is right that they were no longer consecrated but what he does with this fact next is biblically offensive:

"In a similar way, the American altar is broken down and in desperate need of repair. Like ancient Israel, Christians in America have compromised their faith. They may not have bowed down before a pagan shrine, but they have bowed to the gods and goddesses of cultural approval, social acceptance and personal popularity. In Elijah's situation, the fire did not fall until after the altar of the Lord was repaired. The fire of God is not going to fall on America until we repair the altar of the Lord that is broken down. The awakening we speak of is not going to occur until we renew our absolute consecration to Him." -- Eddie Hyatt

This is the same leap in illogic that all NAR dominionists take. It is a form of replacement theology. America is not Israel, no matter how Hyatt rewrites history. This country was never under covenant with God. There is no renewal of consecration if there never was consecration to begin with. This is the core deception they traffic in. That America was not only Christian at its inception but actually under covenant with God. It was not true then and it is not true now. Hyatt was not done distorting history however:

"The first generation of immigrants to America were totally consecrated to God. Moved by their absolute commitment to Jesus, they left homes, family and friends to begin a new life in the New World. The Great Awakening that gave birth to this nation was led by people totally committed to God and His Word." -- Eddie Hyatt

Yeah, no. The Puritans were not our spiritual kin. They falsely believed and announced that God had made a new covenant with them. That if they behaved according to scripture and reformed the Anglican Church, then those in England would repent and change their sinful ways. Was any of this true? Absolutely not. The pilgrims were separatists who believed the church could not be reformed. They were deemed illegal in England which is why they fled to the new world. Either way, by the time the country was found 150 years later, the pilgrims and the puritans were no longer running the show. There were many factions of Christianity, atheists and deists, who believed in a God but not the God. Thomas Jefferson rewrote the bible removing all reference to the deity of Jesus Christ. This is who Eddie Hyatt thinks was in covenant with God? Some closing thoughts from Hyatt:

'Repairing the altar of the Lord" must begin with the church--with God's people. We do this by allowing the Holy Spirit to search our hearts and show us where we have compromised His truth because we were afraid of offending some person or some group. Or, it may be that we have compromised by putting our own personal success and desires ahead of His will and way. As we repent of our compromise with the world, we position ourselves to see the fire of God fall on America. When the fire of God fell on Mt. Carmel, the entire nation was turned back to God. It can happen again. "If My people, who are called by My name, will humble themselves and pray, and seek My face and turn from their wicked ways, then I will hear from heaven, and will forgive their sin and will heal their land" (2 Chron. 7:14). As part of our July Fourth celebrations, let's repair the altar of the Lord that is broken down in this nation.' -- Eddie Hyatt


Where you have compromised His truth Eddie is in perpetuating your personal desires as His own. In pretending that you can stay His hand of judgment from this land. It is in idolizing the carnality of this country. It is in lying about our history to further your own agenda. It is also in perpetuating the lies regarding women in ministry. Do not worry Eddie. The fire of God will fall on this country. Judgment is coming.

Next up we have Stephen Strang. The second link above is to a recent article of his on Charisma touting an interview he did with Pastor Mark Burns, who he describes a "black pastor from South Carolina who boldly supports President Donald Trump." Strang is all in on Trump and has written two books already about his presidency. Strang opens by recounting that Burns' support started in 2016 when he claims God told him, "Show the world that [Trump] is not a racist." Now, it is obvious and low hanging fruit that God said no such thing to Burns. I do not even need to get into whether he is or not racist because it is simply not relevant for this discussion. God uses all leaders for His glory and His plan but He is not in the endorsement business. Neither party cares about the cause of Christ. All one has to see is the plethora of false teachers surrounding Trump to know that he is not the second coming of King Cyrus with a Deborah anointing and an Elijah mantle. Yet the appearance of all of these false teachers only further confirms for much of the church that Trump is somehow chosen by God. Paula White Cain living on five million dollars stolen from the sheep of the Lord and on her third marriage? Hey don't cast stones! Kenneth Copeland and his billion dollars, 6.5 million dollar tax free parsonage and three private jets? Yep he is cool. The list just goes on and on with the who's who in heresy. Robert Morris, James McDonald, Ronnie Floyd, James Dobson, to name a few oh and of course, Mark Burns.

Burns is lifted on high by Strang in this article but I wonder if he saw the video, which is the third link above. This was done when Burns first burst onto the scene with Trump. Watch as the interviewer slowly dissects the many and various lies Burns told about himself in his biography. Lie after lie. Who he was affiliated with. Where he went to school. His defense? Someone must have hacked me. His IT platform's response? No one hacked him. Faced with the unbearable weight of the truth, Burns storms out of the interview and leaves even though it was being conducted at his own church! He would later issue a mea culpa, admitting to the lies and lamely trying to blame it on fear of being accepted and taken seriously. Not for nothing, but Mark Burns should not be taken seriously. Everything he has built was built upon this foundation of lies. Then at the end of the apology he has the gall to suggest that the only reason why people are questioning him is that he is an African American supporting Trump.

No Mr. Burns. I refuse to call you pastor because you did nothing to earn that title. People scrutinized your own claims because you were a pathological liar, not because of your politics. The overall point here is in the unbridled arrogance to rest upon such false leaders and charlatans. Strang also praised Dr. Darrell Scott, another false minister who received his doctorate from the back of a box of cereal. The NAR does not care beloved. They will continue to roll out Paula White to pray for the horn of power or some other gibberish. They will continue to pretend that false prophets had predicted Trump when they had not. They will continue to use people like Eddie Hyatt to rewrite history and mangle the bible in pursuit of reviving what was never alive to begin with. Come out from among them. Mark them. Have nothing to do with their fruitless evil deeds of darkness. Time is running out and while these people are playing games the true cause of the Gospel suffers. Do not fall for these deceptions.

Credentialed Minister of the Gospel for the Assemblies of God. Owner and founder of 828 ministries. Vice President for Goodwill Industries. Always remember that in all things God works for the good of those who love Him and are called according to (more...)
Related Topic(s): Cool; Faith; God; Prophet, Add Tags