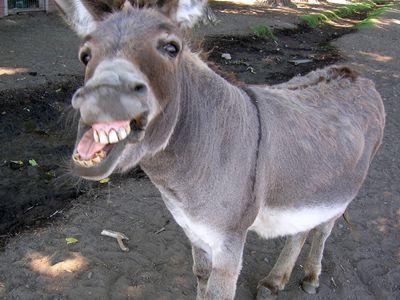 And at noon Elijah mocked them, saying, "Cry aloud, for he is a god. Either he is musing, or he is relieving himself, or he is on a journey, or perhaps he is asleep and must be awakened." -- 1Kings 18:27 (ESV)

But when he saw many of the Pharisees and Sadducees coming to his baptism, he said to them, "You brood of vipers! Who warned you to flee from the wrath to come? Bear fruit in keeping with repentance. -- Matthew 3:7-8 (ESV)

Sometimes those who secretly do not want criticisms leveled at their favorite false teachers will attack those that expose them by focusing the tone of the message. These efforts are of course meant to distract people from the actual point. The bible is filled with falseness being rebuked by pure snarkiness. Consider the key verse where Elijah mocks the prophets of Baal by suggesting that maybe their false god is not answering them because he is in the bathroom relieving himself! Talk about throwing some shade at people. John the Baptist called out the Pharisees as a "brood of vipers" in our second set of key verses. Jesus Himself referred to them as white washed tombs. These are not terms of endearment. They are accurate yet sarcastic commentaries on who the people were that were being addressed.

I say this as a backdrop to addressing yet another jack-ass post from Kris Vallotton. He is the number two pastor in charge at Bethel Church in Redding California. Bethel is a virtual cesspool of false teaching that embraces nearly every false doctrine alive today. They are also ground zero for the NAR, experiential Christianity and the false signs and lying wonders movement. Just this past week they garnered national attention as the church gathered to pray and chant together for the resurrection of a two-year-old child that had died. The head of Bethel, Bill Johnson, came out himself to defend this ridiculousness by abusing several bible passages. A jackass is simply a stupid person by definition. Thus a jackass post on Facebook is simply a stupid post. Kris has outdone himself on the ole Stupidometer today.

'The noble minded Bereans. The brethren immediately sent Paul and Silas away by night to Berea, and when they arrived, they went into the synagogue of the Jews. Now these were more noble-minded than those in Thessalonica, for they received the word with great eagerness, examining the Scriptures daily to see whether these things were so. Therefore many of them believed, along with a number of prominent Greek women and men. But when the Jews of Thessalonica found out that the word of God had been proclaimed by Paul in Berea also, they came there as well, agitating and stirring up the crowds. Then immediately the brethren sent Paul out to go as far as the sea; and Silas and Timothy remained there." - Acts 17:10-14

It's interesting to me that the noble minds of the Bereans caused them to receive the word with eagerness. They were studying the word to validate truth not debate it. On the other hand the folks from Thessalonica who weren't noble, "Heard that word of God had been proclaimed by Paul in Berea, they came there as well, agitating and stirring up the crowds." It's funny to me that most of heresy hunters think of themselves as noble Bereans yet the fruit of their ministry is most similar to the Thessalonians who argued, agitate and stirred people up against those they disagreed with. Jesus said, " You will know them by their fruit..."' -- Kris Vallotton

Kris has a false bill of goods he wants to sell you here. As someone who is constantly called false he seeks to demonize those who point out his falseness. So he tries to leverage the story of the Bereans to vilify his critics and displays his biblical illiteracy in breathtaking fashion. Let's deal with this on three levels. First is the level of the Bereans. The main point Kris tries to sell here is that the Bereans only wanted to verify and never debate the truths they uncovered. Think for a second the point he is missing here. Paul of course was found to be correct! Their validation did not need any further debate! Now assuming this was always their practice we can be assured that the Bereans also came across teaching which their validation proved to be false. Is Kris seriously suggesting that they would return the next day and debate nothing? To be honest, most discernment ministries are not looking for debates anyway. The only reason debates arise is if those deceived take issue with their beliefs being exposed as false or their favorite false teacher being exposed as a wolf.

Having abused the portion of scripture dealing with the Bereans, Kris now abuses the portion dealing with the Thessalonian's by claiming they are like those practicing discernment. The reality however is right in the very text that Vallotton cites! Those from Thessalonica found out that the word of God had been proclaimed by Paul in Berea and they went down to disrupt that teaching and stir people up against it. So the Thessalonians did the opposite of what discernment ministries do. They heard that the word was being correctly preached and they were having none of it. Discernment ministries hear that heresy is being preached and we will have none of it. Somewhere it think Kris knows this but was hoping no one would realize the old switcheroo he tried to play. The issue with either the Bereans or the Thessalonians is whether the word being preached is correct -- not the ensuing confrontation. Perhaps the worst however is the third level when Kris then invokes the following verses:

"Beware of false prophets, who come to you in sheep's clothing but inwardly are ravenous wolves. You will recognize them by their fruits. Are grapes gathered from thornbushes, or figs from thistles? So, every healthy tree bears good fruit, but the diseased tree bears bad fruit. A healthy tree cannot bear bad fruit, nor can a diseased tree bear good fruit. Every tree that does not bear good fruit is cut down and thrown into the fire. Thus you will recognize them by their fruits. -- Matthew 7:15-20 (ESV)

Kris casually references that you will know them by their fruit and likens it to those who would dare have a debate over doctrine. That is of course absurd. His reference provided in context above clearly indicates it is speaking about false prophets and teachers such as Kris Vallotton. He is the diseased tree that cannot bear good fruit. Even in this small post he has butchered two scripture sets and every doctrinal matter arising from them. It is that rotten fruit that leads us to conclude that he is false and should be marked and avoided as such. He was however saving his absolute worst for last:

"Hope you had a wonderful Christmas. May God richly bless you this year. If this feels like the prosperity gospel; then may God kinda of bless you and give you just enough that you still struggle so you can build character." -- Kris Vallotton

This is what makes the post a jackass post. The main thrust of Vallotton's "ministry" is the prosperity heresy. He has written books on the subject to lie to you about God wanting you rich. He likes posing in front of luxury cars and claiming that we are poor because we have a "poverty mindset." So he signs off this post with a sarcastic extended middle finger to those who would dare call him a prosperity whore correctly. God bless you unless you think that feels like the prosperity gospel! Wink wink. If you want to question him about his monetary heresies than may God only kinda bless you and only give you just enough to build character. Ugh. What an idiot. Literally whenever Kris Vallotton take pen to paper he makes it obvious that he is a wolf who is only deserving of our highest contempt, mockery, and the working end of the shepherd's rod.