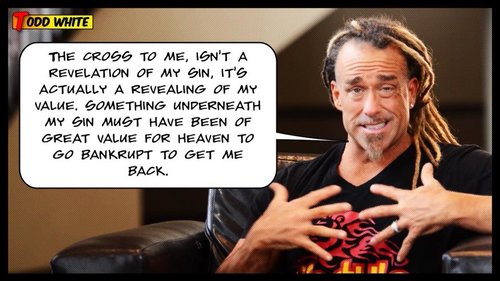 But when he saw many of the Pharisees and Sadducees coming to his baptism, he said to them, "You brood of vipers! Who warned you to flee from the wrath to come? Bear fruit in keeping with repentance. - Matthew 3:7-8 (ESV)

The Internet and the Christian world blew up this week when renowned heretic Todd White preached that he had repented for not preaching the entire Gospel. Todd correctly admitted that he had never preached on the wrath of God and sin. He correctly admitted that as a preacher the blood of his listeners is on his hands. I will admit as many have, that a great deal of what he said was welcomed and correct. The Kumbaya moment however ends there. I know there are many who would just prefer to accept what he said, assume he has genuinely repented and move on. Oh, that we would be as concerned about the hundreds of thousands of people Todd reached with that false Gospel as we seem to be about him. I say false because that is the underlying point we must not lose sight of. As Justin Peters pointed out, when you say you have not preached the entire Gospel, you have in fact preached no Gospel at all. Now before anyone gets all weepy remember we are not talking about someone who simply was deceived. Todd White was a willful deceiver.

Let's go back to his starring role in the heretical film, Holy Ghost. In it, Todd attends a Korn concert and performs what is known as the "Growing Leg Con." This has been a well-known scam for decades before Todd. Using camera angles and sleight of hand, Todd pretended to command a man who had a shorter leg grow out the appendage to the correct size. This command was allegedly accomplished through God. Except there was no miracle. There was no shorter leg. To this day Todd has still used this short-con operation. Likewise, when Todd would roam foreign countries to randomly select people to "heal" he knew full well he was healing no one. When he preached that he was sinless, he knew full well he was not. Bearing fruit with the keeping of repentance offered by Todd starts with a public confession of who he was. His sermon last week left out these details. Todd appeared to try and make it sound that he genuinely thought he was preaching the Gospel until this great revelation. That is simply not borne out in fact. His involvement in both Holy Ghost movies reveals a fraud who knows full well he is a fraud. Do I hope he has truly repented of being a fraud? Certainly but that begins with bearing fruit in keeping with that stated repentance.

Then there is the not so small matter of Lifestyle Christianity, which is the money-maker for Todd. He has set up an entire fake university, charging 5000 per year to obtain an uncredited degree but now that Todd has admitted to preaching falsely for 16 years it is only logical to assume this university is built on the same false Gospel. This is how Todd has built his small fortune as the school's revenue exceeds millions and was paying White about 500K per year in 2017. You see it is easy for someone like Benny Hinn to claim repentance after he has bilked the flock of God for 60 million dollars. Less than a week after that public declaration of repentance Hinn was back at his usual flock fleecing activities. It is easy for Joyce Meyer to say maybe she has taken prosperity too far after she has made eight million dollars doing so. So paint me skeptical but it seems Todd may be saying he will now preach the true Gospel within the paradigm of heresy he has set up for the past 16 years. That is not the true Gospel then at all, nor is it bearing fruit with the claimed repentance. Let us turn back to scripture for the picture of repentance:

Behold half of my goods I have given to the poor and of what was left I paid back four times to anyone I defrauded. Do not be confused beloved. This is not a "works" based salvation. This is the fruit of salvation. Zacchaeus was so overjoyed that he willingly corrected the record of his sinful past. Now, I cannot imagine trying to track down 16 years of defrauding but it has to start somewhere. It has to start tangibly, not just vocally. If all Todd White does is add wrath and sin to his false gospel, he is still preaching a false gospel. If he still preaches that the cross does not reveal his sin but rather his worth, then his gospel is still false. If he still preaches word faith and false signs and lying wonders then his gospel is still false.

Then we come to the fruit of who we stand with. Todd White has surrounded himself with a cloud of heretics. He often brags about how Kenneth Copeland is his spiritual father. This is a man who has bragged about fleecing God's flock for over one billion dollars. Copeland's theology is straight up demonic and if Todd has truly repented then we must assume he will not only sever ties with Copeland but will publicly denounce his false gospel to affect reparations for those he has led to Copeland. The same goes for his associations with Lou Engle, Francis Chan, Darren Wilson and every single false teacher he has shared the stage with.

I would like to close with a quick review of the key verses from the start of Matthew's Gospel. John the Baptist sees the Pharisees and Sadducees coming down to the water where he was baptizing. They represented the false teachers of the day. John did not welcome them with open arms. John did not rejoice at the appearance of repentance. No beloved. I would just say to Todd the same thing John said that day. Who warned you to escape the coming wrath? Bear fruit with the repentance you claim today. That is how we will gauge sincerity. That is how we will know that this is not just another Benny Hinn moment or a Joyce Meyer revelation. The fruit would start with what we spoke about today. Confession of the charlatan you have been, shutting down your ministry and school. Claiming to repent is an important first step but the next few months will tell us if there is real fruit in keeping with that repentance or if Todd was just pulling our leg.