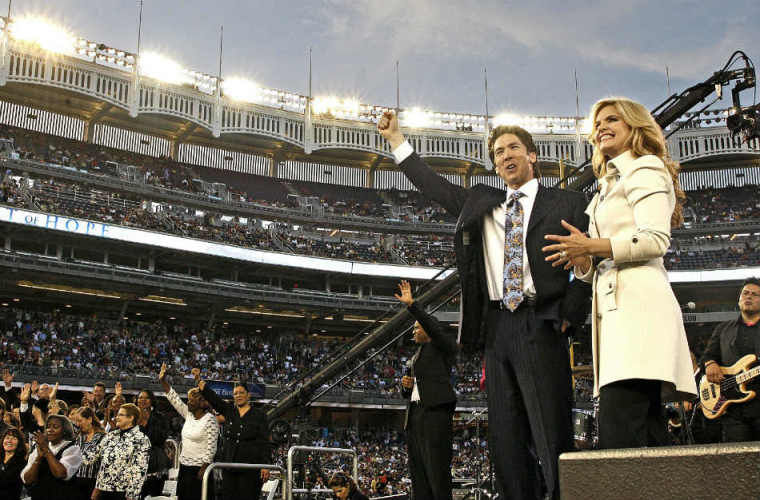 Paul Washer was credited with quipping that Joel Osteen was God's wrath upon those willing to sit through his sermons. A harsh but true assessment of one of the great heretics of our day. Many will gloss over that statement or roll their eyes because let's face it, Joel is a likable kinda fellow. He has that million-dollar smile and is so encouraging in his presentation. He is our generation's Tony Robbins only he holds a bible in the air and claims to teach it and that is where the problem is. If he would simply stop pretending to be a preacher, I think most would probably leave him be from the discernment world. Yet he persists in his ruse and he is due back in New York soon to preach again at Yankee Stadium for another of his night of hope things. Tens of thousands will go to hear him speak. Tens of thousands will be lied to that evening and presented with a god that does not exist. They will be sold a false bill of goods and be led to believe they have become saved and born again when nothing could be farther from the truth. Read the key verses carefully beloved because they are some of the most frightening passages in the bible. These people standing before Christ thought they were saved. They saw miracles in his name allegedly. They saw demons cast out allegedly. These are churched people as Rick Warren would say. Churching was the problem however because WHAT church you go to means the difference between heaven and hell because without the preached gospel, no one gets saved. Joel Osteen does not preach the gospel. His two-sentence faux prayer does not get you into heaven. The people standing before Christ saying Lord Lord may very well have started their church journey at a night of hope similar to the one coming to the Bronx soon. People think Joel Osteen is of little harm but that is a false sense of security that we need to be very careful about.

I say this because I tend to forget about Osteen too. He tends to stay under the radar these days unless his wife is saying something egregiously stupid like we worship god for ourselves and not Him. I forgot however to change the channel this past Sunday and before I knew it, I was neck deep in a Joel Osteen program. Instead of writing down a full set of notes I just focused on a couple of statements that summarize the danger of Joel Osteen. The first was:

"Negative words can stop what God has for you. The people of Israel spoke negatively and did not enter the promised land." - Joel Osteen

I just want us to consider these words for a minute. If you honestly think there is anything you can say that would "help" or "inhibit" the God who spoke everything in the universe into existence than you are following a fake god. In fact, who is god in this scenario Joel has preached? You are! In Osteenology, god has all of these marvelous and wonderful plans for your life if you would only stop being so darn negative. That must be news to our Christian brothers and sister being martyred in the Middle East for their faith or those hiding in the underground church in China. Those negative nellies! Don't they realize they are stopping what God has for them? How insultingly absurd. It is more than that however. It is a teaching that absolutely shipwrecks faith. Osteen's word faith heresy teaches that we are little gods. That we have the power of creation in our words, just like God does. It comes from abusing this scripture, which I heard Osteen butcher in a pervious trip to Yankee Stadium:

as it is written, "I have made you the father of many nations""in the presence of the God in whom he believed, who gives life to the dead and calls into existence the things that do not exist. - Romans 4:17 (ESV)

Here is a lesson in basic reading. Who according to this verse gives life to the dead and calls things into existence that do not exist? If you answered God, you are correct. Osteen actually teaches that this verse means we can do the same thing when it says nothing of the sort. This may seem not too offensive but imagine the people who try this and do not see the change he promises. In this sermon he told them that if they wanted to see "increase" then they had to speak it. What will those facing eviction or homelessness feel about God when their words do not create the money they need? I remember a few years back on Joel's Facebook page there was a post by an acolyte asking for help because he was getting foreclosed and the sheriff was coming to padlock his house. He was genuinely confused because he had tithed and spoken positively to no avail. The responses from other Osteen followers were horrific. Many were just using the same, lame self-help snippets Joel uses but others were blaming him and his "lack of faith" for his situation. That is the damage done by listening to people like Joel Osteen.

I will close with one other anecdote from this sermon on Sunday. Osteen loves to tell motivational stories that always seem to fit right into his narrative. They are usually uncheckable and silly but they are convincing if you have no discernment. His story this week was about a man who was on a soccer scholarship at the University of Kentucky but gave it up for his dream of playing kicker in the NFL. Osteen said the man was listening to a sermon of his on radio that assured him his "shift" was just a phone call away. A half-hour later the Cincinnati Bengals called him and invited him to tryout. All allegedly because he spoke positively about the seemingly impossible odds since this man had never kicked before professionally and barely had any kicking time at Louisville, where he had transferred to. Osteen gushed that he had made the team! Hallelujah! Pass the offering plate!

I did a little research. The man's name was Jon Brown, formerly Jonathan Brown. He was apparently a pretty good soccer player so who knows what he gave up to chase the kicking dream. He did not make the team. He was invited to preseason tryout and was beaten for the job by veteran kicker Reggie Bullock. In fact, I cannot find any official record of Mr. Brown ever kicking for the Bengals at all. In 2020 he ended up on the Jacksonville Jaguars team. They had gone through four kickers in the first five weeks of the season. Brown was the fifth. He kicked in one game and did make his first ever professional field goal, nearly five years after hearing the motivational sermon from Joel Osteen. Then he missed his second attempt. Then he was cut from the team. From what I can tell, that was the end of his kicking career. Beloved, we can convince ourselves God is behind anything but more often than not we are just trying to confirm what we want. I do not know Jon Brown but this story does not end the way Joel Osteen was making it out to be. He walked away from a sport he was good at and had a scholarship for to pursue the least important role on an NFL team. Five years training, learning and sleeping on floors is his testimony and in the end he has one field goal. Maybe he latched on as coach somewhere, but my real hope is that he did not end up blaming God for the nonsensical shift Joel Osteen promised him.

The Value of Our Offense - The Cost of Unforgiveness (34984 views)

When Personal Worldview is More Important Than Truth (31095 views)

The time limit for entering new comments on this diary has expired.