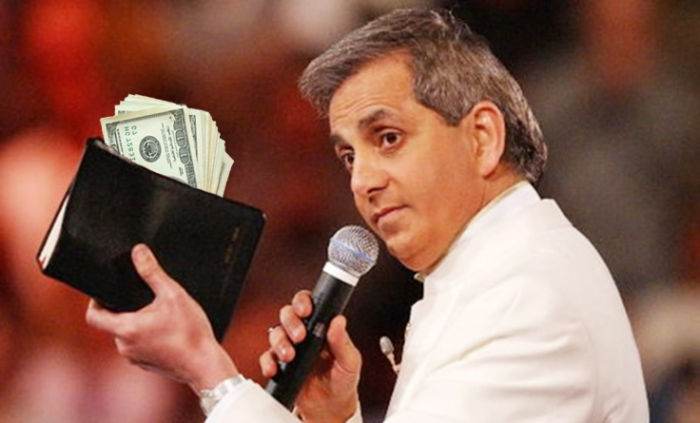 And Zacchaeus stood and said to the Lord, "Behold, Lord, the half of my goods I give to the poor. And if I have defrauded anyone of anything, I restore it fourfold." And Jesus said to him, "Today salvation has come to this house, since he also is a son of Abraham. -- Luke 19:8-9 (ESV)

With all the hubbub this week surrounding Dr. Michael Brown deciding to play Shaggy from Scooby-Doo in investigating whether a man who slept with his nanny and kicked people in the face for his ministry should be allowed to continue representing Christ, we almost lost sight of this story. Benny Hinn appears to have repented? Now paint me skeptical or at least discerning but when I first read the headlines I assumed it was satire from the Babylon Bee. The Charismatic Internet has been abuzz since the fake healer, prophet and preacher claims to have renounced the prosperity Gospel. Let us go through his statement which can be found over at Charisma News and see if it is true that the first wolf in history to repent has come to pass.

"The lid is off," says Benny Hinn. The televangelist says he's been sick of the prosperity gospel for a while, and now he's speaking out about it. A video posted Sept. 3 shows the preacher denouncing the prosperity gospel as "an offense to the Holy Spirit." "I'm sorry to say prosperity has gone a little crazy," Hinn says. "And I'm correcting my own theology, and you need to all know it, because when I read the Bible now, I don't see it with the same eyes I saw it 20 years ago." Hinn says Charisma CEO Stephen Strang asked him last year if he wanted to go public with it, but Hinn initially told him, "Not totally, because I don't want to hurt my friends and my love, who believe things I don't believe in." -- Benny Hinn

Now the conflict many are feeling is one of the forgiveness a Christian believes in and the deep sense of nagging that Hinn is full of it. At age 66, maybe Hinn is realizing that he is in a lot of trouble when he stands before the Lord. The problem is that Benny Hinn is not just a prosperity preacher beloved. I view someone like Mike Murdoch as solely a prosperity preacher. Hinn is also a word faith adherent, which is also rank heresy. He is also an established false prophet. perhaps worst of all, he is a fake healer, pretending to knock over stadiums with a mere swing of his sport coat. I have seen nothing in his recent statements about any of this. As for the eyes through which he sees things, 20 years ago he wanted money and fame and today he already has it. Benny Hinn prospered himself to the tune of a 42-million-dollar self-worth today. That is 42 million dollars he scammed from the children of God promising them things he now claims makes him sick to his stomach.

So let me tell you what the bible says about this because we do not want to lean too much on the outrage of our flesh. God can turn any heart he chooses but His word says the destruction of Benny Hinn sleepeth not. Try hard to come up with one wolf who truly repented. I will wait for your answer but you will come up blank. The bible tells a story of a different man who had robbed the children of God and made himself wealthy beyond his dreams of avarice. His name was Zacchaeus and he was a chief tax collector. Yet the key verses tell us what he did when he realized the error of his ways. He took half of his goods and gave them to the poor. Anyone he defrauded he repaid four times as much as he had stolen. Because his actions matched up with his penitent words, Jesus declared that salvation had to come that house on that day. Wait a minute preacher! Are you saying Hinn should give away 21 million dollars? Yes, that is what I am saying. While it may be difficult to impossible to pay back four times the amount to the individual people he has defrauded over the last several decades there is no reason he cannot show his sincerity by giving away half of his plunder, as long as it is to a reputable source. What am I saying? It is easy to have a change of heart when you are sitting on top of 42 million dollars.

"But now Hinn isn't holding back. "I believe it's an offense to the Lord, it's an offense to say, 'Give $1,000,'" he says. "I think it's an offense to the Holy Spirit to put a price on the gospel. I'm done with it. I will never again ask you to give $1,000 or whatever amount, because I believe the Holy Ghost is just fed up with it." Hinn says this theology hurts the gospel. "I'm making this statement for the first time in my life, and frankly, I don't care what people think of me anymore," he says. Hinn says he rebuked Pastor Dan Willis of Lighthouse Church of All Nations for teaching the prosperity gospel, telling him to "never preach that message again." Hinn told Willis he no longer wanted any part of that theology. "If I hear one more time, 'Break the back of debt with $1,000,' I'm going to rebuke them," he says. "I think that's buying the gospel. That's buying the blessing. That's grieving the Holy Spirit. That's about all I will say. If you are not giving because you love Jesus, don't bother giving. I think giving has become such a gimmick, it's making me sick to my stomach." -- Benny Hinn

Benny Hinn rebuking someone for preaching prosperity is like when Keith Richards did a "Just Say No" commercial. It is borderline comical for Hinn to speak against buying the Gospel when he spent decade whoring it out. The disturbing thing again is the seeming whitewash everyone is doing to the rest of his false ministry. Michael Snyder over at Charisma just wrote an article extolling the virtue of Hinn for confessing this turnaround and how people should forgive and not doubt. I get it beloved. we all want there to be truth in this claim but then there are these words to reflect upon:

"Poverty comes from Hell. Prosperity comes from Heaven. Adam had complete dominion over the earth and all it contains. A. Adam could fly like a bird. B. Adam could swim underwater and breathe like a fish. Adam went to the moon. Adam walked on water. Adam was a super being; He was the first superman that lived. Adam had dominion over the sun, moon & stars. Christians do not have Christ in their hearts. Sow a big seed, when you confess it, you are activating the supernatural forces of God.