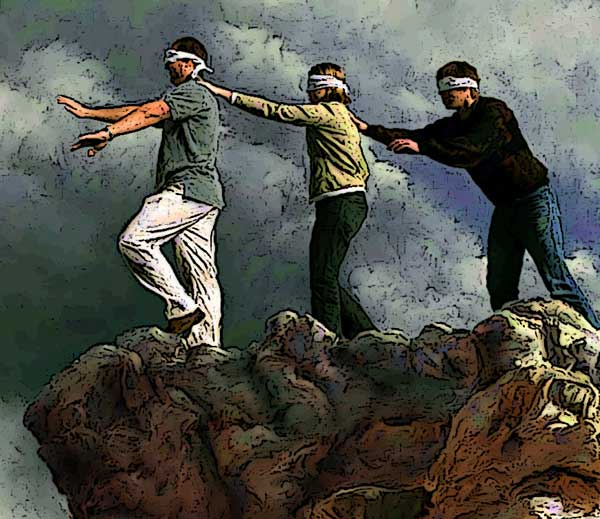 For I feel a divine jealousy for you, since I betrothed you to one husband, to present you as a pure virgin to Christ. But I am afraid that as the serpent deceived Eve by his cunning, your thoughts will be led astray from a sincere and pure devotion to Christ. For if someone comes and proclaims another Jesus than the one we proclaimed, or if you receive a different spirit from the one you received, or if you accept a different gospel from the one you accepted, you put up with it readily enough. -- 2Corinthians 11:2-4 (ESV)

Let me apologize up front for the length of this devotional. The points were important and needed to be made. So, pack a lunch and let's delve back into the mind of Carey Nieuwhof, self-professed Christian leadership expert, as he turns to atheists to figure out why so many Christian leaders are leaving the church.

"It's the hope of almost every preacher I've ever met that people will embrace Jesus. That's been my hope every time I preach. And yet the opposite seems to be happening: more people than ever before seem to be walking away from Christ. It's not that they haven't been to church, they have. And they've left. The wave of de-conversions among Christians seems to be growing every day. While the stories of high profile Christian leaders walking away from their Christianity and others who are questioning their faith abound, the headlines are symptomatic of a deeper trend: atheism and spirituality not connected to any orthodox understanding of Christianity are on the rise. In fact, as the Barna Group reported, atheism has doubled in Generation Z compared to other generations." -- Carey Nieuwhof

Atheism has doubled. Questioning of the faith thickening. High profile Christian leaders walking away from Christ. Waves of deconversion growing every day. You have correctly identified the problem Carey. Now what to do with it? Why is this happening? What has occurred over the past several decades that would lead to this kind of exodus from organized Christianity? More importantly, what role did you play in the exodus Carey? You still have time to get on the right side of this and recognize that your zeal was not for Christ but for the carnal niche you have staked out within the purpose driven industrial complex. It has allowed you to play expert, give grand speeches and most importantly make money but what about the cause of Christ? What about the Gospel? You see Carey, you are so hopeful that your listeners will embrace Christ that you did not care what christ you introduced them to. What are you saying preacher? Is there more than one christ? Of course! Read the bible. The key verses spell this out beautifully. The people at Corinth were easily led astray and Paul writes to them about it in the 11th chapter of the second letter to the Corinthians. In quickly exegeting these verses we see that God wants and expects a pure church. A pure bride is the imagery used. While in carnal terms purity is related to sexual matters in spiritual terms it is related to worshiping other gods before or instead of the real God. Even atheists worship something, they just do not realize it. Maybe it is money, power, fame, or just their own desire to rebel but believe me they are worshiping something. So, what does Paul offer up as leading the Corinthians astray from the real Christ? A false christ! A false spirit! A false gospel! The problem Mr. Nieuwhof is not that not enough people embraced your false christ but that too many did. You are part of a system that presents the world with a false gospel that has created the apostate church the bible prophesies about. The leadership principles you have been selling have no grounding in scripture and instead are based solely on carnality. Is it any wonder that some wake up from this and realize the lie they have been living?

"I don't want to be part of any Twitter mob or comment gang that piles on leaders who share their deconversions publicly. I honestly can't see what good comes of that. Anyone who thinks judgment and hatred will win people back to the Christian faith needs to think again. Judgment is a terrible evangelism strategy. I feel some empathy for people who are deconverting. I too have gone through some deep questioning of my Christian faith. Ironically, in college, my questions didn't lead to an abandoning, but instead to an embrace of Jesus and the Christian faith. Since then, my own questions and my consideration of other viewpoints, faiths, and worldviews keep drawing me back even more deeply into the embrace of Jesus, but that doesn't mean the questions people are asking aren't legitimate or real." -- Carey Nieuwhof

Typical of someone within the industry to worry about the performers instead of the customers. I mean the leaders instead of the sheep. If Marty Sampson wants to question his faith publicly then it should be addressed publicly. If Joshua Harris wants to make millions of dollars from Christians then decide to renounce Jesus Christ in public, the discussion needs to be held in public. You see Carey it is no longer about Joshua and Marty when they decide to air their grievances. It is about the church. It is about the bride of Christ. It is about the sheep. People embraced the teachings of Joshua Harris and worshipped to the songs of Marty Sampson. Their faith was intertwined with the celebrity you sold them. I feel joy for their deconversions because they are deconverting from a false gospel and a false christ that may have never even saved them to begin with. Read Matthew 7 and see all the churched people standing before Christ saying Lord Lord. His answer is He never knew them!

"The paradox for me personally is that my questioning of Christian assumptions over the years has deepened my faith, not eroded it. But I also realize this isn't what's happening for many people. They question, explore, and then leave. So the question becomes why. While the answer is complex, I think some of it may have to do with the state of preaching today. In this post, I want to offer a few reflections on what might be contributing to the rise in atheism, agnosticism and the rather astonishing deconversions we keep seeing--namely, the way we preach. Obviously, that's not the sole cause of the deconversions happening, but at some level, it has to be a contributing factor. Preaching is one of the central features of our public worship times, and Gallup indicated that 76% of people still choose a church based on the quality of the preaching. Clearly, the way we teach and preach still has an impact, for better or worse. It's also why my friend Mark Clark and I put this together for preachers. There are at least three factors about our preaching that might be spurring deconversions. I share these out not to point fingers, but just to say that our current approach isn't working nearly as well as it should or could. I also offer them as a preacher. Preaching should help people find faith, not cause people to lose it. And it haunts me that there are tens of thousands of people who grew up in church listening to sermons who have walked away." -- Carey Nieuwhof