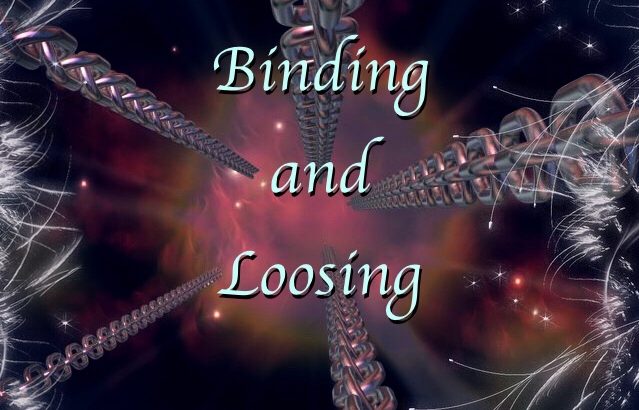 Binding and loosing is yet another bible teaching twisted by Charismania. This one stems from a poor understanding of the key verse above. We must remember that most false teachers and prophets desire to be like God or be God Himself. Their sin is no different than the sin of Lucifer. They want to ascend to the throne of the Most High. As a result they have an inflated view of themselves and their powers here on earth. While they call Jesus Lord they consider Him more of a partner or a wing man. The most repeated heresy is the notion that we can speak things into existence when the bible could not be clearer that this ability is the Lord's alone. Many of these charlatans teach that we are in fact little gods. The late Myles Munroe taught that God cannot do anything on the earth without our permission! The delusion runs deep in these folks beloved and the subject of binding and loosing is no different.

I am sure we have all heard it before from the hyper-charismatics and super spirituals in our own church. They run around binding and loosing things declaring and decreeing their power over the devil himself. Some stick to spiritual matters but others just go full tilt and start binding and loosing everything from common colds to cancer. Such is the case with the above linked article from the General, Cindy Jacobs. Before we get there however let us understand what the key verses are actually teaching. This is from the scene where Peter correctly answers that Jesus is the Christ. Jesus declares that God gave Peter such an insightful and correct answer. He states that the gates of hell will not prevail against the church of Christ. Then He says the key verse today. That Peter will be given the keys to kingdom of heaven and whatever he binds on earth will be bound in heaven and whatever he looses one earth shall be loosed in heaven. Before we get confused I have one question:

Does earth dictate anything to heaven?

The answer is no beloved. Heaven flows to earth and not the other way around so what is Jesus saying? First, for simplicity sake let us understand that loosing mean allowing and binding means prohibiting. Because Peter is being given the keys to the kingdom of heaven he now will understand what is allowed and not allowed in the kingdom. Thus what he binds and looses on earth will be determined by this insight. Today we have the keys to the kingdom of heaven in the Gospel of Jesus Christ. By reading and understanding the bible, we too know what is permissible and what is not. We can bind what we know is not allowed and loose what is. The death and resurrection of Christ broke the power of sin in our lives. Sin is not permitted in heaven. Thus we can bind the sin that we struggle with. The supernatural power is not ours beloved -- it is His. Let us now reason together once more through the above article and see what Cindy Jacobs is binding and loosing today.

'The Lord says, "My children, didn't I tell you not to let your dreams die? Some of you are stuck because you have just said, 'Well, that dream is gone.' Didn't I say there was a convergence of dreams? Didn't I say that there were prayers that you have prayed that are all coming together?" I feel an admonition from the Lord that many of you heard what He said, but you didn't really believe it. The Lord shows me that there are many people in the body of Christ today who are heartsick. And your heart is so full of unbelief. You've gotten to a place where the spirit of unbelief has overcome you. In the name of Jesus, we bind and break the spirit of unbelief. And the Lord says, "There's nothing too hard for Me. If you stay stuck, then it will be because you did not apply My principles."' -- Cindy Jacobs

Let me start by saying unbelief is something not allowed in heaven. The question is what are we believing in? Belief should be equated to faith in Jesus Christ and the work of the cross. That is not what Cindy Jacobs is selling here. What Cindy is upset about is that not everyone believed her and the false prophecies she has brought. Such as:


Don't let your dreams die
There is a convergence of dreams

Prayers are coming together


Who said these? They sure are not in the bible. So when Cindy "binds and breaks" the spirit of unbelief it is not unbelief in God she is speaking of but unbelief in her. Sometimes our dreams do not work out as we wanted. Many times when we reflect back years later we can properly see those events as God protecting us from our own wickedly deceitful hearts. Sometimes the answer to prayer is no. Is God still God when He says no? If not then you need to realize that you are your own god. Those of you who did not really believe the heretical words of false prophetess Cindy Jacobs I commend you.

"I remember giving a word about binding the spirit of delay. I actually was on the phone the other day, waiting to get an answer from a credit card company, and I was just fidgeting, feeling so tired of waiting. And it was like the Holy Spirit touched me on the shoulder and said, "You know, you have authority over this." So I bound that spirit of delay, and I'm telling you, that agent came on right away." -- Cindy Jacobs

Now I believe that modern voicemail systems are of the devil but the notion that Christ died on the cross so we could bind credit card companies from wasting our time is asinine at best. Cindy is absolutely shameless here in claiming God actually spoke to her and told her that she had authority over Capital One. Ugh. This is so ridiculous we have no choice but to accept one of two possibilities. The first is Cindy Jacobs is simply lying. Considering she lies for a living this is not so radical a concept. The second possibility is she is not lying which would mean that a demon tapped her on the shoulder and she could not tell the difference. Either way, we ought to stay as far away as humanly possible.

'Another thing like that happened to me where I was delayed on a flight. We weren't taking off, we'd actually waited on the tarmac for an hour, and it was the same thing. The Lord goes, "Now look, there's a weather problem; you can take care of that. And there's a problem going on right now with delays. So why don't you just bind, take authority over the weather where you're going to fly, and bind the spirit of delay? I used those tools God had given me, and so what happened? Well, the pilot got on, and said, "Oh, I want to tell you the weather patterns have changed. And we're not going to be delayed any longer; we will make up the time."' -- Cindy Jacobs

Really. Cindy Jacobs is actually declaring that she can control weather patterns. Beloved this is what happens when you allow false teaching into your doctrine. Jesus teaches that eventually the little leaven spreads through the entire batch. She is now binding thunderstorms and hurricanes. How pathetic. Why isn't she ensuring that no hurricanes reach the shores of the US if she has such great power? The same reason why faith healers don't hang around emergency rooms. She actually claims here that God Almighty told her she can take authority over the weather! I pray I never have to fly with Cindy Jacobs because I would rather wait on the tarmac for safe weather than trust that her demonic binding has actually bound anything at all.