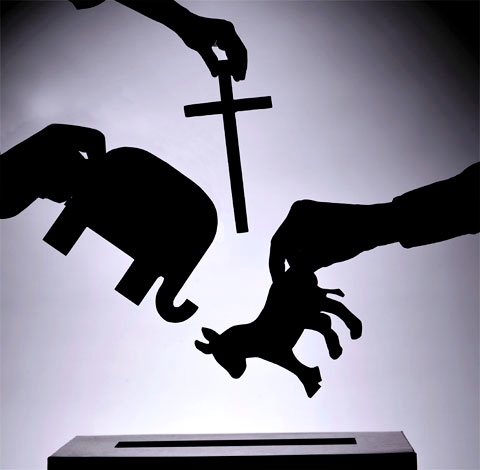 As we head deeper into the election season to political forces that manipulate the church will again step up their efforts to ensure that the church votes their way. It is important that we are not duped into thinking that a carnal vote is a Christian enterprise. When Jesus walked the earth He was entirely apolitical much to the disappointment of His disciples. They wanted Him to deliver Israel from the oppression of Rome. The Pharisaical forces of today sell the notion that the church needs to be delivered from the radical, socialist commies on the left. Jesus however came to earth to deliver us all from the oppression of sin, a far greater cause. It always amazes me how much time, angst and effort churchgoers spend in worry over this world, which is passing away and always at the expense of the cause of the Gospel. Jesus will not be asking you about your voting record. Think how utterly moronic that thought is. We get to heaven and Jesus says, "well, I would like to let you in but"c'mon, Clinton in 96?" If only the church would care as much about the Gospel as they do about worshipping this country. Then again, we know that NAR dominionism will be final idol of the church age. The link above is from Charisma News this week and while they try so hard to sound righteous, they lie and misrepresent the truth throughout. Let us reason once more beloved.

"In a little over two months, voters could decide whether we throw away America. iVoterGuide President Debbie Wuthnow asks, "Will America continue standing on the principles of freedom outlined by our Founding Fathers, or will we instead throw it all away and replace it with something else?" "Our vote this November is more critical than ever," Wuthnow says. "That's because the forces opposing America have been unleashed. The choice is ours." It boils down to three choices:

The first target of the "cancel culture" is religious freedom. Faith is dangerous to the radical agenda, and so it must be eliminated. Leaders like California's Gov. Gavin Newsom banned indoor worship for territory covering 80% of that state's residents. Legal defense organizations are inundated with cases where churches and individual Christians have been severely restricted across the nation. Governments have allowed churches and religious figures to be torn down or threatened. The Choice Is Clear." - Charisma News

This hyperbole is always indicative of the script of the NAR. In 2012 the world was ending unless the church voted for the Mormon candidate, embarrassing the cause of Christ yet again. In 2016 the apocalypse was promised unless the church came out to vote for the least Christian candidate in the history of this country. Not only did they oblige but they turned him into the second coming of Elijah. Donald Trump is now deified by the NAR dominionist crowd and there are multiple books out already demanding the Christian vote for him again or else Mom, kitty cats and apple pie will be eviscerated by the evil forces that represent anyone who disagrees. One of the truly sad effects of this idol worship is the need to lie, which is not lost on the unsaved. The representation of the Governor of California here is simply inaccurate. The state prohibited ANY gatherings, of which churches were certainly part of it. Instead of obeying Romans 13, the church revolted against the government, misread the constitution and petulantly stamped their feet until they simply decided to ignore the orders.