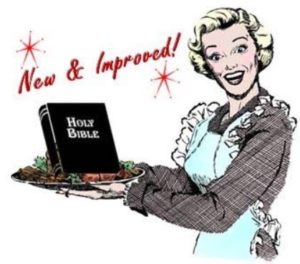 "Yet many of the rulers also believed in Him. But because of the Pharisees they did not confess Him, lest they be put out of the synagogue. For they loved the praise of men more than the praise of God" (John 12:42-43).

Whenever the NAR speaks about a "religious spirit" my bovine excrement detector goes wild. You see, the NAR is neck deep in so many of the popular heresies of the day. They believe in experiential Christianity, dominionism, prosperity, false signs and lying wonders, false authority, mandatory healing and word faith, just to name a few. The experiential doctrines teach that what we experience is equal to or higher than scripture. They consider those that demand scriptural accuracy to be legalists in need of a deeper spiritual revelation. Today's deep theology is that if you are not basing your beliefs on the bible then it is not the Spirit of God that is revealing things to you.

The core benefit of preaching NAR or other heresies is to please man and not god. These false teachings are loved by the lost because they do not need to repent in order to believe they are saved. The do not get bogged down with all of the pesky do's and don't's of the bible. The dominionist pleases man by telling him he is really in control of this earth and not God. The prosperity preacher tells man that God wants him rich beyond his dreams of avarice. The false signs and lying wonders amazes man with carnal oohs and ahhs. The word faith preacher tells man he has the same power as God. The experiential Christianity preacher assures man that what he believes is just as important if not more so than what God has already said. Now, those that are in discernment are branded as religious by the NAR but the reality is we are the opposite of what they claim. Just like when Paul said that his aim was to please God and not man, the same can be said for anyone calling out false teaching. I say this as a backdrop to discussing the above article from NAR false teacher Wanda Alger entitled, "Seven Ways to Know You Are Listening to the Holy Spirit and Not a Religious Spirit." Buckle up beloved, it gets bumpy from here.

'"Yet many of the rulers also believed in Him. But because of the Pharisees they did not confess Him, lest they be put out of the synagogue. For they loved the praise of men more than the praise of God" (John 12:42-43). When Jesus revolutionized His nation with the gospel of the kingdom, He was continually questioned and criticized for His visionary initiatives and unorthodox methods. The Pharisees were the politically correct referees who sought to silence His voice and penalize any advancement of His message. Knowing that their power and influence were losing ground, their religious mindsets could not comprehend or celebrate the very truths that could set them free from their own man-made bondage. It is just like the accuser of the brethren to threaten and attack anyone who exposes his lies and demonstrates the true nature of our heavenly Father. Our spiritual adversary seeks to use control, fear and condemnation in order to keep us trapped in our flesh and disconnected from the life-giving power of God's Spirit.' -- Wanda Alger

The gall it takes to cite the key verse just blew me away. It is obviously true that the Pharisees preferred the praise of man but as we just outlined above that is what the false NAR teachers seek as well. Do you think it is difficult to preach that God wants you rich? Is it a burden to teach that you are just as powerful as God? Notice what Alger does right away? She distorts the ministry of Christ. The NAR fancies themselves visionaries who just use unorthodox methods. That was not at all what Jesus was like! In fact He insisted that the entire law would not be touched until everything passes. Repentance was not a visionary message -- it was what God had been saying for thousands of years to Israel! The other NAR trick here is to try and turn the tables. Suddenly anyone who dares to question them is an accuser of the brethren in bed with Satan. The Pharisees did not have a religious mindset as Alger is laying out here. They insisted upon adherence to the law, while missing the point about the law. Jesus likened it to straining out a gnat while swallowing a camel. Those who focus on exposing the falseness of the Alger's of the world are doing the opposite. They are entirely focused on the camel. The NAR is not missing the small things beloved. They are missing everything.

"This religious spirit is still active today, speaking into the ears of many unsuspecting believers, trying to block any kingdom advancement and fresh expression of the Holy Spirit. Preying on our fears and self-doubts, this demonic influence will stop at nothing to keep us bound to religious systems and the expectations of man. This spirit is manifesting again today, not only in our national politics, but in many of our church pulpits and social media platforms. This counterfeit authority is still speaking, trying to draw us away from all that the Father is accomplishing in this hour. The enemy resists any true work of the Spirit and subverts any attempts at bringing the supernatural realities of heaven to earth." -- Wanda Alger

This is the false narrative the NAR is always trying to set up. That those who insist on biblical accuracy are trying to suppress the fresh and new things the spirit is trying to do. The cold hard reality is that it is not the Holy Spirit we seek to suppress but rather the demonic spirit the NAR traffics in. It is not the expectations of man we seek to be beholden to but rather the expectations of God. The rest of this is the same spiritual gobbledygook that the false signs and lying wonders portion of the NAR always uses. It always speaks about the true work of the spirit as if it is supposed to be in disagreement with His own word. There is usually a shifting somewhere in the atmosphere that leads to a suddenly. The coup de grace is always this notion of bringing the supernatural to earth. meanwhile the "religious legalist" is simply asking that whatever nonsense they spew -- that it be found and corroborated by scripture. When God gave us His final revealed will in the bible did He forget something that now He needs Wanda Alger to tell us? Their entire premise is simply absurd. That thousands of years ago when God ensured what books would make it into the canon of scripture that He forgot to include the part about bringing heaven to earth through shifting suddenlies! He forgot to mention that there will be some vague "new thing" that you will need to hear through your wickedly deceitful heart and it should be taken as credibly as the bible itself.

Credentialed Minister of the Gospel for the Assemblies of God. Owner and founder of 828 ministries. Vice President for Goodwill Industries. Always remember that in all things God works for the good of those who love Him and are called according to (more...)
Related Topic(s): Christianity; Faith; Religious Hypocrisy; Spirituality, Add Tags
Add to My Group(s)
Go To Commenting
The views expressed herein are the sole responsibility of the author and do not necessarily reflect those of this website or its editors.