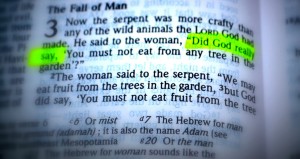 As in all the churches of the saints, the women should keep silent in the churches. For they are not permitted to speak, but should be in submission, as the Law also says. If there is anything they desire to learn, let them ask their husbands at home. For it is shameful for a woman to speak in church. -- 1Corinthians 33-35 (ESV)

Beloved, as I have written before, this subject brings me no joy. I have no dog in this hunt. I know women who have genuinely tried to serve God within this plane of disobedience. They are friends. I am compelled however to say what the bible says and too many ask me to weigh in on this ongoing struggle to beat back Christo-feminism within the church. A Christo-feminist simply believes that women should be in all church leadership positions, including leading men in teaching and preaching, which the bible clearly forbids. It is an outgrowth of the worldly system of women's liberation. In order to prop up their positions they have to either read the minds of people who lived thousands of years ago, infer things from the text that are simply not there or turn Paul into a rogue anti-woman apostle. Remember however that we believe in divine inspiration, which means we believe God wrote the entire bible. That includes the parts we may not like nor understand. Our job is not to scour the bible for verse fragments and historical narratives we can twist but to simply be obedient to what God has clearly said. The above link is from a seminary student who is furthering the case of Christo-feminism in the church. So let us reason again as we sift through the usual arguments that disagree with what God has already said.

"There's been a lot of buzz surrounding women lately. From Hollywood and #MeToo to Christians and #ChurchToo, women are demanding their voices be heard " and many are listening. Women everywhere are echoing Oprah's famous line--"A new day is on the horizon!"--from her empowerment speech during Golden Globes." -- Kat Armas

Quite the mixed bag of carnality and sleight of hand to open up this piece. The me too movement had to do with sexual assault against women, not that women need to be in leadership. Are we really willing to change what God has said for Oprah? Who cares what Oprah says? Beloved, let's lay this case out simply. I did not say women could not exercise authority over men in teaching and preaching -- God did. What we have in the key verses are two distinct passages from two different books. These are directive passages beloved. They contain no ambiguity at all. They use definitive language such as "I do not permit" and "As in all the churches." God even provides the reasoning behind his decision -- because Eve was the transgressor. Yet despite these clear instructions, Christians are willing to ignore them because Oprah Winfrey thinks there is a new day on the horizon? Let's remember these verses as we progress through this article.

"But naturally, just like everything else in culture, not everyone agrees--particularly when it comes to women's role in the Church. After John Piper came out with a response stating women should not pastor (or teach), Twitter users took it as an opportunity to promote, encourage and affirm the women who have impacted them in their faith and in their theology. Names of women rolled in for hours and with reason. Historically, women have been crucial aspects of the Church's growth and spiritual formation. It's apparent women belong in leadership. Here are five reasons why" -- Kat Armas

Well, if Twitter users say so I guess it is ok to ignore what God has said? Of course not. What is interesting here is the illogical leap Armas makes, which is often the argument from people who wish to be disobedient to these scriptures. She is right to say that plenty of women have been crucial to the church's growth and spiritual formation. No one is arguing otherwise. Women have been great missionaries, prophets, and helpers in ministry over the millennia. Armas takes this fact and leaps to the conclusion then that we can disobey God. She is mistaken. Now onto her five reasons: