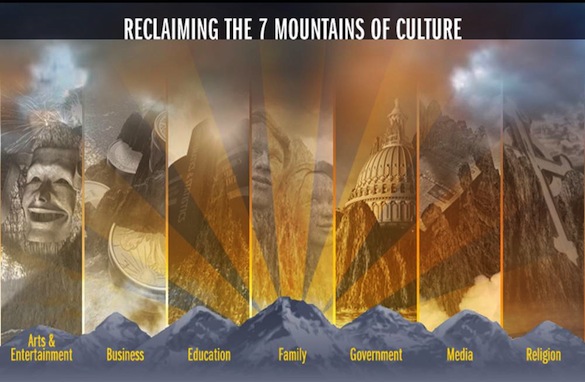 A month ago, Dr. Michael Brown wrote the above piece about his favorite idol, President Trump. Yes Brown is a staunch gatekeeper for the NAR but he serves that master in another way as well and that is defending the indefensible president at every turn. I would say he carries the president's water but that would be an insult to water-carriers everywhere. I want to be very clear, although political matters will be discussed, this is not a political devotional. Anyone who follows this ministry knows that our position is that we are not called to shape culture but to save people out of it. We do not believe that any party or candidate deserves one ounce of conferred righteousness. Jesus was totally apolitical, and so should we be, as citizens of heaven and pilgrims through this land. The best argument one can make for casting votes one way or the other is the lesser of two evils argument but never lose sight of the fact that if you defend such, you are still defending evil.

The NAR has many facets and one of the more obvious ones is dominionism. They fully embrace the seven mountains mandate that says we must conquer seven cultural mountains to facilitate the second coming of Christ. While many actually believe this, others prefer a less controversial dominionist stance that agrees we should conquer the mountains but does not believe it will bring about the second coming, per se. Either way, we are left with pseudo-Christian leaders that leave the Gospel behind to preach the righteousness of the Republican Party and the inherent evils of their rival, the Democrats. It leads to a myopia that is saturating the current apostate church and has two stark results. One, it immediately alienates half the church and two, it gets Christians to loathe the very people who need the Gospel. I waited on writing about the above piece because Brown asked a poignant question at the end -- can we vote for Donald Trump and then just live out our Christian calling without feeling the need to defend him at every turn. I thought that was interesting to look at a month later and so let us reason through the entire article together.

"This is a perennial ethical question, one that is becoming increasingly relevant in our national elections. Do the ends justify the means? The simple answer is that it depends on what the ends are and what the means are. In the view of author Ben Howe, when it comes to evangelicals voting for Donald Trump, the answer is no, the ends do not justify the means. The losses outweigh the gains. We may have made gains in the courts and elsewhere, but we have lost our credibility as Christians. In the view of Professor Darrell Bock, it may well be that our vote for the president has done more harm (in terms of the degrading of the nation) than good (in terms of pro-life legislation, pro-Israel moves and more)." -- Dr. Michael Brown

Brown starts off by failing Christian ethics 101. The ends NEVER justify the means. God is quite capable of fulfilling His will over His creation without our compromise. When you start to try and ascribe the eternal to the carnal, you just muddy the waters. What is interesting here is the "tell." What does it say that you feel compelled to start this article off with a mea culpa? I believe deep down, true Christians know they are holding the hand of the devil when they embrace Trump. Again, before the whataboutism games start, that does not tacitly endorse anyone else. Do not think for a second however that the church supporting the most immoral president ever has not damaged the witness for Christ.

"In the view of strong Trump supporters, there's no debate to be had. The man is fighting giants. He's pushing back against so many societal evils (both nationally and internationally), not to mention taking on the left-wing media, doing his best to drain the swamp and making positive decisions today that will help the next two generations. Who cares about some mean-spirited tweets and some ill-advised words? The man has been sent from God." -- Dr. Michael Brown

These are carnal argument that have nothing to do with the cause of Christ. The other side will vehemently tell you there is no such thing as the left-wing media. They will point out to the cronies he has placed in positions they do not understand is the definition of growing the swamp, not draining it. Then the downplaying of the evil tweets of this man is breathtaking. Mean spirited? Is that all you think it is when you incite people to violence? When you have been exposed as lying over 12,000 times in your first three years? His words are not "ill advised" they are evil and we should not be caught defending evil. Then to ascribe that evil to being from God reveals a huge part of this problem. It is not enough just to vote for him or claim the lesser of two evils argument. Many in the apostate church insist on deifying the evil. It has been written that Trump is the second coming of King Cyrus, with an Elijah mantle and a Deborah anointing. Just this week he was compared to Jehu. Everyone praises the fact that he has surrounded himself with known egregious false teachers such as Paula White. He has not been sent by God.

"And so the debate continues, ceaselessly and endlessly, driven by the media and social media. How, then, do we sort this out? Do the ends justify the means? Was it justifiable for evangelicals, who so prize morality and integrity, to elect such an unevangelical leader to take up their cause? There is an interesting anecdote in the Talmud that discusses a related ethical dilemma. A person came to a rabbinic leader named Rabba and presented his problem: "The ruler of my village came to me and said, 'Kill that person, and if you do not then I will kill you.' Can I follow his order so that I will be able to save myself?" Rabba responded: "Allow yourself to be killed, but you may not kill another. Who says that your blood is redder than his? Perhaps his blood is redder than yours." And what, exactly, does this mean? As explained by Rabbi Adin Steinsaltz, "On a simple level, Rabba's argument is that we cannot tell whose life is more valuable, so we will not allow you to save your life at the expense of another." Based on this logic, the Talmud states that various laws can be broken to save your life, such as the Sabbath or the dietary laws. In other words, if someone puts a gun to the head of an Orthodox Jew and says, "Eat pork, or we will kill you," it's permissible for him to eat pork. But if someone puts that gun to his head and says, "Kill someone else," or, "Engage in sexual immorality" or "Worship an idol or we will kill you," then he must say no, even if it costs him his life. So, when it comes to Jewish law, these three commandments (against idol worship, forbidden sexual acts and murder) "are so severe that a person should give up his life rather than perform the forbidden acts." Many Christians have given their lives for similar principles, such as, "You can kill me, but I will not deny Jesus." In such a case, the ends (here, saving your life) do not justify the means (here, denying the Lord). But what if the ends are noble (saving other lives) but the means are anything but noble (lying, breaking some laws and being nasty)? What then?" -- Dr. Michael Brown