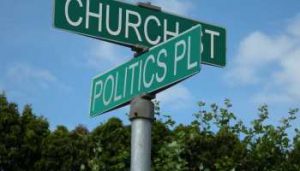 And he said to them, "What things?" And they said to him, "Concerning Jesus of Nazareth, a man who was a prophet mighty in deed and word before God and all the people, and how our chief priests and rulers delivered him up to be condemned to death, and crucified him. But we had hoped that he was the one to redeem Israel. Yes, and besides all this, it is now the third day since these things happened. - Luke 24:19-21 (ESV)

So when they had come together, they asked him, "Lord, will you at this time restore the kingdom to Israel?" - Acts 1:6 (ESV)

The New Apostolic Reformation (NAR) are primary proponents for Christian dominionism. This is the false and heretical belief that we need to conquer seven cultural mountains in order to facilitate the second coming of Christ. We need to take dominion, so to speak. This comes from a butchering of a verse in Genesis made by people who worship this country before God. I am not suggesting consciously, as the devil is rarely that obvious. They come up with reasonable sounding arguments but they are never rooted in scripture because scripture disagrees. Jesus disagrees. The primary evidence of this is found in the life and ministry of Jesus Christ when He walked this earth. In His day, the nation of Israel was under the thumb of Roman oppression. They suffered true persecution, not the faux persecution that the NAR sells as victim mentality to the apostate church today. The followers of Jesus all thought He was going to deliver them from the oppression of Rome but He came to deliver the world from the oppression of sin. Do not miss this key point. The Roman empire is but a footnote in God's history. What is far more important is the eternal reality of those who may suffer temporally. The key verses today display the desires of those who followed Jesus. The first set of verses is from the Road to Emmaus scriptures, on the third day after the crucifixion. The men walking with Jesus, unbeknownst to them, revealed what their hopes had been. They hoped that Jesus would redeem Israel from Roman oppression. Even after the crucifixion this is what is foremost in their minds! The second key verse is from the opening chapter of Acts while Jesus spends 40 days with His disciples. Even then, after three plus years of telling them about the kingdom. After teaching them about eternity, they still are focused on their physical deliverance from Rome rather than what Jesus had just bought for them on the cross. Soon they would receive the Holy Spirit who would lead them into all truth and they would embark on changing the world.

I say this as a backdrop for reviewing the latest article from Dr. Michael Brown opining about the intersection of politics and the Gospel, linked above. Over the past decade we have watched the fall of Dr. Brown from respected theologian to a near 100% dedicated political animal. He always tries to sound like he is playing both sides of the fence but if you read the scope of his work over the past five years it was obvious he was an apologist for the former president. That aside, he is the primary gatekeeper for the NAR dominionism he often pretends doesn't exist. He excuses false teacher after false teacher and as we will see today, he also is constantly making excuses for the church being involved in politics despite Jesus never doing the same. So let us reason once more:

"Three years ago, I conducted a poll on Facebook asking, "Should pastors and Christian leaders just preach the gospel, or should they also comment on relevant social and political issues?" Three years later to the day, I posted the same poll on Twitter. How did the results compare?

Obviously, there is nothing scientific about these polls. They simply indicate how my Facebook and Twitter communities feel about the question. As for these two social media communities, although they have much in common, in many ways they disparate in their viewpoints and beliefs. How did the results compare? In 2018 on Facebook, out of roughly 1,900, 84% said "Gospel & culture" with only 16% saying "Gospel only." In 2021 on Twitter, out of 889 responses, 79.2% said "Gospel and culture too" with only 20.8% saying, "Gospel only."

The overall differences were fairly minor, especially given the fact that many Christians are still suffering burnout from the 2020 elections while many others have felt the need to draw back from both politics and the culture wars, taking time to refocus spiritually and get their heads clear." - Dr. Michael Brown

Wow. So let me see if I have this straight. You teach your followers that NAR dominionism is the right path for the church and then poll them to see if they believe in NAR dominionism? Exactly what answer were you expecting? This would be like Peter telling Jesus that he polled the disciples and they all believe He should really focus on delivering them from Rome! In the immortal words of Dwayne Johnson - it doesn't matter what you think! Every second you waste on this world is one less you could have spent on the actual Gospel. Jesus did not suffer on the cross for the politics of this world. His kingdom is not of this world. This world is passing away. We are pilgrims and sojourners through this world. Our citizenship is in heaven and despite what the NAR believes, God does not authorize dual citizenship. How do we know? Read the first commandment!