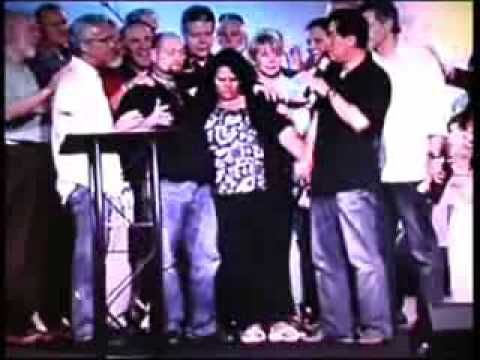 Sometimes the key verse just comes to me, as it did today. God will not be mocked. If we sow to the flesh, we reap corruption. If we sow to the spirit, we reap eternal life. Sowing to a false spirit? A spirit of utter carnality? Yeah well, God will not be mocked beloved and I can think of no more appropriate verse for the Todd Bentley fiasco than this. On April 2, 2008, a church in Lakeland Florida asked Todd Bentley to speak for a week as a traveling evangelist. He was soon packing 15,000 a night into tent meetings. By May 29, his ministry claimed that 140,000 people from over 40 countries had visited and 1.2 watched on the Internet as the Lakeland Revival blew up the Charismatic world. Bentley was a tattooed preacher from Canada and the truth is, we should have seen this coming. Unsealed court records from Canada revealed no less than 4 drug overdoses by age 18. At age 15 he was convicted of sexually assaulting a much younger boy when he was 13. Still, Bentley claimed to be a changed person by the power of the Gospel at the age of 18 and we love a good forgiveness and restoration story in the church.

So, there we were years later in Lakeland watching Bentley punch a man with stage four pancreatic cancer in the stomach. Why you may ask? Because he claimed the holy Spirit told him that was how he wanted to impart healing to the man. This was Bentley's schtick. He bragged once about kicking a little old lady in the jaw with his steel toed boot in order to "release the spirit" in the venue. He would scream "bam!" Whenever he laid hands on you. He also claimed to have a personal angel named Emma. Now if this all sounds bizarre and unchristian to you, congratulations, because it was then and it is now. You must remember though we are dealing with the church that accepted holy laughter, barking like a dog from Toronto and spasmodic demon control from Pensacola so Lakeland may have been disappointing but not all that surprising. You see there were still those 15,000 people per night. Todd Bentley was a moneymaker and the purpose driven industrial complex of the NAR was not about to question him. Instead, they went to Lakeland to anoint Todd Bentley a prophet, on what many refer to today as the Charismatic Day of Infamy. On June 23, 2008, just two months after he first appeared at Lakeland, the NAR came to town to anoint Bentley. Included that day on stage were C. Peter Wagner, who founded the New Apostolic Reformation (NAR). With him was Bill Johnson, Rick Joyner, Che Ahn, and the Arnotts of the aforementioned Toronto debacle. Wagner claimed "apostolic authority" that day to decree that Todd Bentley would increase in power, authority, favor and influence. Bill Johnson prayed over him. Then the gaggle of false prophets anointed him by pouring oil over him and left town.

Within two months, Todd Bentley fell from grace as it was exposed that he was having an affair with his secretary, had falsified his healings and routinely showed up drunk. God will not be mocked. He waited just long enough to not only expose Bentley but the entire NAR, including Bill Johnson, who doubled down by overseeing the "restoration" of Todd Bentley along with Rick Joyner. This restoration process including divorcing his wife and marrying the secretary. A little over a year later, in 2010, the NAR declared Bentley restored to ministry and released him back into the sheepfold to make them money. Considering his claims of deliverance from his youth and his behavior in Florida, Bentley should never have been allowed back into ministry. That is not even touching on his completely whackadoodle doctrine. Timothy is warned by Paul to watch only two things - his life and his doctrine. The life that Todd Bentley has lived in ministry disqualifies him. The doctrine of violence to impart healing and angelic nonsense equally disqualifies him yet here we are in 2019 talking about a third wave of scandal to hit the NAR anointed Bentley. It turns out that a revivalist from Lion of Light ministries is now accusing Bentley of sexual perversion (after the "restoration") with both male and female interns. Stephen Powell tried to resolve this internally but Rick Joyner blew him off. Here is the statement from Powell:

Uh-huh. Sexually suggestive emails for a six-year period of time. Sexual conversations about your wife with your interns. Is there anyone left, even Charismatics, who buy this? Even Joyner is pretending he has had nothing to do with Bentley since 2012 but Powell correctly points out that Rick Joyner serves on Todd Bentley's board! Oops. Despite being cold busted like that, Joyner actually tripled down by accusing Powell of operating in a spirit of witchcraft! This despite the claim from Joyner now that God showed him in 2008 that Lakeland was not going to be Bentley's last public sin and embarrassment. Joyner then never explains why he would help restore someone to Christian leadership that God told him would fall again! He lamely leverages Proverbs that says the righteous fall seven times, but they rise again. Dear Lord, is he serious? What in the world about this story would lead you to think there is a sliver of righteousness in Todd Bentley? Was it the homosexual assault he perpetrated at the age of 13? Was it the kicking little old ladies in the face? Was it leaving his first wife for his secretary? Or was it sending sexual pictures of his current wife to his interns, who he then had sex with. The truth is that Rick Joyner is a horrible false teacher and shill for the NAR and if there were people who still thought he had credibility I pray this finally drives them away from him. Which brings us to the above posted link to Michael Brown opining on the Bentley saga. Will Dr. Michael Brown finally speak against a fellow Charismatic? Let us reason together once more and find out"