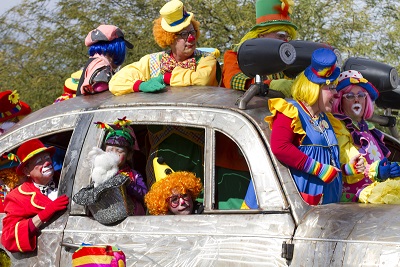 Enough is enough. It is time for the body of Christ to stand up and tell wannabe leaders who do not care about the cause of Christ to shut up and sit down. That starts with Dr. Michael Brown. The recent debacle surrounding false prophet Todd Bentley has been disgusting and revolting along with totally damaging to the Gospel. It ripped the scab off of the original wound from ten years ago when Bill Johnson and Chuck Pierce declared Bentley was penitent enough to return to ministry. They paved the way for the past ten years of mangled sheep at the bloody hands of Todd Bentley. After having to deal with the unseemliness of new accusations of sexual abuse we also had to tolerate Brown, speaking out of both sides of his mouth in trying to give Bentley some cover. As if this insult was not enough Brown now apparently is going to head up a commission to investigate the allegations and recommend punishment if warranted. Please. So let us wade through Brown's official statement and rebuke the gatekeeper of all that is false in the body today.

"Official Statement Concerning Allegations Against Todd Bentley, by Dr. Michael Brown. Dear friends in the Body of Christ, Last month, a long list of serious charges against evangelist Todd Bentley was posted online, leading to a firestorm of controversy and confusion. In turn, this has unleashed a wave of gossip, slander, and innuendo against others in the family of God. Along with this, many are asking the question: Is there any accountability in the Church?" -- Dr. Michael Brown

Forever in the 20th century, Brown absolutely hates whenever anyone uses modern technology to communicate. That aside, Todd Bentley is not an evangelist Michael. He is a cancer within the body of Crist metastasizing due to your friends Bill Johnson and Chuck Pierce. He is a shill and a con man. He is a false prophet and false teacher that should never have been allowed back into the sheep pen if not for the treacherous work of those you continue to defend. Now we are supposed to have confidence that you are going impartially investigate him? Seriously? You wrote a book against hyper grace but refuse to call Joseph Prince a false teacher. You wrote a book about the abuses with the charismatic church but claim Benny Hinn and Johnson are good brothers in the Lord. Why would we expect anything other than a whitewashing from you? Even this opening statement reveals your bias. There was no innuendo. There was no confusion. Here was the statement of the accuser:

Did you note what Bentley has said here? Some of the accusations were absolutely true! He was texting his interns the details about sex with his wife! Are you serious here Dr. Brown? Is there any investigation you can conduct or context you can find that would excuse this behavior?

"In response to this, I have been tasked by a number of senior leaders in the Body to assemble a group of trusted and respected men of God who will review the charges against Todd and make a determination, in accordance with 1 Corinthians 6. While we do not have judicial authority over Todd's ministry, we do have the support of a wide range of leaders in the Body, who will be stating in advance that they will back the decision of the panel. It is our hope that this will set an example of a righteous way to handle disputes and accusations such as these for others in the Church, especially in non-denominational circles where it is often more difficult to establish patterns of accountability. We will be working with an investigator who will help us vet ALL charges. The panel of leaders will then review the evidence and make a determination of guilt or innocence in accordance with the facts presented. Based on that determination, conclusions will be made in terms of how the charges against Todd have been handled, whether he should be in ministry, and whether others are guilty of falsely accusing him or misrepresenting the facts. While we are deeply grieved that this has become a public spectacle being played out online for the entire world to see, we believe that God will use all this for His glory and the good of His people. The reputation of Jesus before the Church and the world is at stake, and it is imperative that we follow a godly, biblical process in order to set things right" -- Dr. Michael Brown

Senior leaders in the body eh? I wonder who that might be? Is it from the same clown car that went down to Lakewood in 2008 to anoint Bentley a prophet only to see him fall from grace after God exposed the affair with his nanny? Do you even care the damage you wreak upon the body of Christ Dr. Brown? I mean at all? It is sadly ironic that you keep using 1Corinthains 6 but I fear you are looking at the wrong half of that chapter. Read the second half about fleeing sexual immorality. The reputation of the church is at stake but while you play Columbo you make a mockery of the church because Todd Bentley should have never been a part of the church. This is a man who punched people with stage four pancreatic cancer and kicked little old ladies in the face to "impart healing." He always had the bizarre "bam!" garbage going on when he was knocking people over. He claimed to have conversations with a personal angel name Emma. Doc, his ministry should have disqualified before he had sex with his nanny. Instead however, the New Apostolic Reformation went to Lakeland and poured oil over his head! Bill Johnson prayed and prophesied over him! Are you serious?