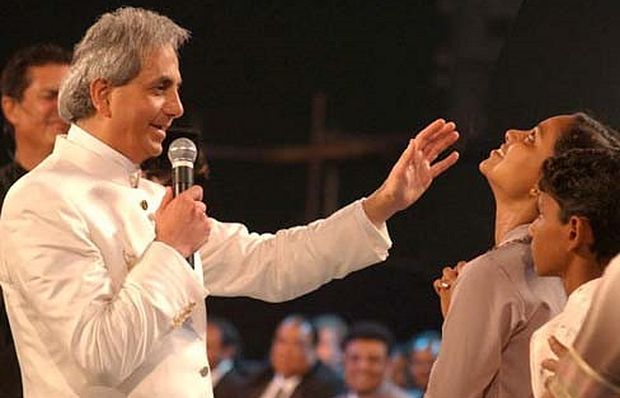 All Scripture is breathed out by God and profitable for teaching, for reproof, for correction, and for training in righteousness, that the man of God may be complete, equipped for every good work. - 2Timothy 3:16-17 (ESV)

Is anyone among you suffering? Let him pray. Is anyone cheerful? Let him sing praise. Is anyone among you sick? Let him call for the elders of the church, and let them pray over him, anointing him with oil in the name of the Lord. And the prayer of faith will save the one who is sick, and the Lord will raise him up. And if he has committed sins, he will be forgiven. - James 5:13-15 (ESV)

At the heart of the false teachings the NAR holds dear, such as Word Faith, Dominionism, and Mandatory Healing on Demand is the held belief that we are in fact God. Charlatans like Kenneth Copeland, Creflo Dollar and the late Myles Munroe have taught that we are in fact "little gods." Bill Johnson has arrogantly stated that God is actually not in control of earth because He "has left us in control." The word faith adherents such as Osteen and Joyce Meyer believe that we have the power to create or alter reality with our spoken words. This is obviously a power God alone has. The dominionist believes as Johnson does; that He need our help in order to accomplish His will even to the point of being unable to come back to earth until we conquer the seven cultural mountains. The mandatory healing folks, like Bill Johnson and most Charismatic preachers, usurp God's power of healing and insist that He actually has no choice but to heal us when we want. This abracadabra theology fits right in with the showy, "look at me" nature of Charismania. Above is a link to a new article by Bert Farias where he makes the case that Christians should not be praying for healing. I kid you not. Let us reason again together beloved.

'"Then He called His twelve disciples together and gave them power and authority over all demons and to cure diseases. And He sent them to preach the kingdom of God and to heal the sick ... So they departed and went through the towns, preaching the gospel and healing everywhere" (Luke 9:1-2, 6). Jesus told us to heal the sick. He did not tell us to pray for the sick. Healing should not be an isolated, one-chance-in-a-100-or-1,000 type of occurrence. Healing should be everywhere. It is part of the gospel. It is what will open the masses to the gospel. It is God's dinner bell for sinners to come and be saved. Jesus commanded us to heal the sick.

Certainly praying for the sick is scriptural (James 5: 14-15), especially for those in the church, but isn't it interesting that in the gospels and Acts no one did so? What does this tell us? It reveals that the church has an authority she does not yet know she possesses.' - Bert Farias

Farias' opening gambit is to quote instructions Jesus gave to His disciples and then pretend Jesus said it to us. He did no such thing. This is a quite common mistake within the healing crowd of Charismania. They take historical narrative scriptures and superimpose themselves into the story. Jesus did not send out Bert Farias to heal the sick. Jesus most certainly did tell us to pray for healing of the sick. There are two key verse sets above. The first establishes that all scripture is authored by God Himself. Paul did not write the letters to Timothy and James did not write the book that bears his name. God did. This is what is known as divine inspiration. The second establishes a clear direction from God - are any among you suffering? Let him pray. Is anyone sick? Let him call for the elders to pray over him that he might be healed. I say might because God is always sovereign. He decides when and if someone receives healing. At another point in scripture Paul advises Timothy to take some wine for his stomach problems and his "frequent infirmities." Why would he give such advice if all he had to do was demand him to be healed? Now, what does it reveal that during the Gospels no one prayed for healing? It tells us that God walked among them! As for Acts, it is incorrect to say that no one prayed for healing as we just pointed out the instructions laid out by James and that was during the Apostolic Age.

"These signs shall follow those who believe (Mark 16:15-20). We are authorized to cast out devils and heal sinners who are sick; those are two of the signs. Why don't more professing believers walk in this power? It must be because we do not believe. The only qualification Jesus put on healing the sick was to believe. Let's not complicate the matter. Let's take Jesus at His word. Notice Jesus' instructions to His 12. "As you go, preach, saying, 'The kingdom of heaven is at hand.' Heal the sick, cleanse the lepers, raise the dead, and cast out demons. Freely you have received, freely give" (Matt. 10:7-8). Notice also Jesus' instructions to His 70. "Heal the sick who are there and say to them, 'The kingdom of God has come near to you'" (Luke 10:9). Once again, Jesus did not tell His disciples to pray for the sick. He authorized them to heal the sick.