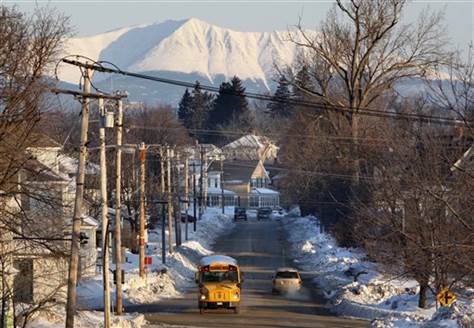 The thief comes only to steal and kill and destroy. I came that they may have life and have it abundantly. I am the good shepherd. The good shepherd lays down his life for the sheep. He who is a hired hand and not a shepherd, who does not own the sheep, sees the wolf coming and leaves the sheep and flees, and the wolf snatches them and scatters them. He flees because he is a hired hand and cares nothing for the sheep. I am the good shepherd. I know my own and my own know me, just as the Father knows me and I know the Father; and I lay down my life for the sheep - John 10:10-15 (ESV)

In the tranquil shadow of Mount Katahdin sits a quiet little town that could just be Anywhere USA. Millinocket Maine is the definition of a small rural town where folks all know each other and embody community. Another astonishing fact until recently was they had zero COVID cases. While they saw big cities like New York struggling they prayed and felt somewhat insulated from the problems that dense populations have experienced with this killer virus. Perhaps that made the threat seem less real to the residents of Millinocket. Who could blame them really? It probably made them perfect victims for the rampant disinformation campaign waged daily on social media. Most do not realize there are political forces at work that believe downplaying the virus gives the president his best chance for reelection. These forces spread false information and wild conspiracy theories throughout Facebook and the Internet. These falsehoods have found a home and willing partners in the apostate church system. The purpose driven church has developed a system of cult of personality pastors who are essentially hirelings, as described by our key verses for today. These men are not shepherds but rather hired hands. Not only would they never lay down their life for their sheep but they ultimately do not even care about the lives of their sheep. As the bible says they are hucksters peddling God's word for profit. Mega-church heretic Andy Stanley once demanded that the church stop using the word shepherd because it has no cultural significance. A true hireling if there ever was one.

So Millinocket was the scene for a wedding on August 7th. There were 65 family and friends who gathered to celebrate the nuptials. Reports are that there was clearly no social distancing nor mask wearing. The next day it is reported that one person reported symptoms. They turned out to be highly infectious and asymptomatic. So they thought nothing was wrong and they now have started a super-spreader event that has infected at least 123 people and caused outbreaks at a local jail and a nursing home 200 miles away. That is how this virus works. One woman has already died and she did not even attend the wedding. Up until this point this is just one of thousands of sad COVID stories. Of good people who simply did not take great enough care and are now paying the price. It is at this point however that the story takes a turn for the worse. The officiant of the wedding was a pastor from a Baptist church in neighboring Sanford, Maine. In the face of these facts, Pastor Todd Bell went ahead with indoor church services anyway. The above link is to an article about this sad tale and the absurdities coming from the mouth of a man who instead of shepherding his flock may have led them to slaughter. So, let us reason once more together through the insanity gripping the church today:

'The officiant of a now-infamous wedding in Millinocket gave a defiant sermon during an indoor church service on Sunday, just a day after Maine's CDC announced it was investigating a coronavirus outbreak among those affiliated with the Sanford church. Todd Bell, the pastor, portrayed Calvary Baptist Church, which he leads, as being on the front lines of a culture war, battling against a "socialistic platform" that mandates mask-wearing and distance learning in schools. "I'll tell you what the world wants all the churches to do," Bell said during one of two Sunday services, which the church posted on YouTube. "They want us to shut down, go home, and let people get used to that just long enough until we can finally stop the advancing of the Gospel." Bell's comments echoed some of the political talking points that President Trump and others on the right have used to decry coronavirus restrictions. At a rally in New Hampshire on Friday night, for example, Trump lamented that Democrats "don't believe law-abiding citizens can go to a church together. You can't go to church anymore."' - Boston Globe

This is so sad. This is the real damage the NAR dominionist teachings can do to local churches. This man is told on Saturday that the Center for Disease Control is investigating a COVID outbreak among those that attend his church and he decides the Christian course of action is to expose his entire congregation to the virus. Why? Because he wrongly believes he is a warrior in an imaginary culture war. That is NAR dominionist speak. They teach that they have to conquer seven cultural mountains as opposed to focusing on the Gospel. His mind is so far gone he actually believes that people who think you should wear a mask and kids should be protected by using distance learning are secret socialists. Apparently, this cabal of secret socialists want the church to go home and stay home so the Gospel will not be advanced. As the Globe correctly points out, Bell's source just may have been this president who often stirs his base up by making such absurd claims. When will Christians stop being the stupid people? This is a secular newspaper that is simply quoting the rantings of a deranged pastor. They do not even need spin or add opinion. Bell's own words make him sound like a raving lunatic not tethered to reality.

"The Aug. 7 wedding at which Bell officiated in East Millinocket has been linked to 123 coronavirus cases in Maine, the largest outbreak in the state, as well as to the death of Theresa Dentremont, an 83-year-old woman who did not attend the event. Many of the participants in the wedding, including the bride and groom, went silent as the fallout grew, switching their social media accounts to private. But Bell's sermon on Sunday, at his church 225 miles south of the scene of the wedding, was fiery and unrepentant, indicating just how politicized the coronavirus has become, even in communities that have been affected by it. At times, he seemed to delight in provocation, saying that he hoped media outlets would watch the service. He did not respond to a request from the Globe for comment. Churches have been political battlegrounds during the coronavirus, as well as occasional hot spots, with more than 650 cases linked to houses of worship and religious events since the pandemic began, according to a New York Times database in early July. On Sunday morning, a 15-person choir assembled onstage at Calvary Baptist, maskless, and sang hymns. The state of Maine says "cloth face coverings must be worn by all attendees when physical distancing is difficult to maintain" at worship services and also that "choirs are strongly discouraged." When asked by the Globe whether the Sanford church was violating state rules, the Maine CDC said only that there was an ongoing investigation into the outbreak." - Boston Globe