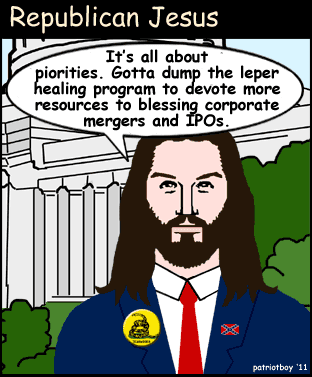 "'I know your works: you are neither cold nor hot. Would that you were either cold or hot! So, because you are lukewarm, and neither hot nor cold, I will spit you out of my mouth. For you say, I am rich, I have prospered, and I need nothing, not realizing that you are wretched, pitiable, poor, blind, and naked. I counsel you to buy from me gold refined by fire, so that you may be rich, and white garments so that you may clothe yourself and the shame of your nakedness may not be seen, and salve to anoint your eyes, so that you may see. Those whom I love, I reprove and discipline, so be zealous and repent. - Revelation 3:15-19 (ESV)

Most dominionists play the wink and nod game. They talk up stale talking points about this country's history, which are not accurate, and mix them with a brutalization of scripture to pretend that America is just in need of some behavior modification in order to spark their favorite word - revival! The problem of course is the same for the NAR America idol worshippers. The bible simply does not support this nonsense. All one has to do is look at the life of Jesus to realize that. When He walked the earth there was real oppression of His people. They were occupied. They were ruled over. They were brutalized. They saw Jesus as the Messiah from their worldly politics with Rome. But Jesus' kingdom is not of this world, so He did absolutely nothing regarding the politics of the day. The reason why is He had a bigger message. He had a bigger goal. The Jewish people were overly focused on the yoke of the Roman Empire that they missed the obvious fact that their real yoke was to sin. Their real bondage was to Satan. That is what Jesus came to deliver them from. Nothing has changed since then. The gospel is about the deliverance for the lost from the bondage of Satan and the yoke of sin. Yet there are still sick Christo-nationalists who think if they can only get deliverance from their political enemies then everything would be ok. Most dominionists approach this cautiously, but not Mario Murillo. Mario is a huge NAR dominionist who holds tent meetings to tell everyone how much they need to hate those who disagree with him. Murillo is not like the cautious NAR folk. He proudly says the quiet part out loud and in doing so makes a fool of himself constantly. Read the above linked article and realize what he is advocating for. The wholesale abandonment of anyone who does not vote the way he says to vote. To him, all Democrats are going to hell so may as well let them go. In the name of Jesus, no less. Let us reason once more together through this raving lunatic's discourse.

"All around you is the rumble of revival and reformation. An earthquake of American freedom. It beckons you! But you are waiting. Every atom of your being screams for you to jump into the river that is healing America. All the cells of your body are vibrating with anticipation. But you hesitate. You are hoping your lukewarm friends and church will change. The tide is turning. Millions are ready to cast off the yoke of the corruption of both Democrats and RINOs. Voices rise in schools, corporate headquarters and in all the halls of power. Even leftist commentators and celebrities are defecting from the insane agenda of Biden." - Mario Murillo

It is important to cut through Murillo's nationalistic rhetoric to understand what he is really saying. Mario Murillo is a rabid dominionist who thinks all things spiritual are solved by electing Republican Party candidates to public office. As a dominionist he pretends or erroneously believes in the great end times revival that he is spouting off about here. The reality is the bible promises no such revival and one cannot revive what was never alive to begin with. America is not healing beloved. It is decaying. Sure, a great deal of it stems from an increase in wickedness portended in scripture but the majority of the blame falls on the apostate church that Murillo is a major part of. Instead of spreading the gospel, which could lead to change, he preaches carnal politics as the salve to solve all that ills society. But he places his faith in a political party no less wicked than the one he rails against. Please note that the bible says we are yoked to sin and the enemy. Jesus comes with a yoke that is easier to manage and light. To Murillo however, his opponents are yoked to the Democratic Party. That is who he is saying is "lukewarm," a biblical concept he clearly does not understand. To him the current administration is "insane" while the former one was righteous. These are the lines he has drawn but they do not comport with scripture at all, or reality. None are righteous. None seek after God.

"Millions of Americans are yearning for a clear voice and a path back to freedom. You are one of those voices. Don't waste it trying to convince the lukewarm. Everywhere you look you see the preachers who are taking a stand. Their churches are growing. Their services radiate with the power of the Holy Spirit. Meanwhile, lukewarm cathedrals wallow in a plugged-up and contaminated creek of denial. Here are five reasons you can no longer afford to wait:" - Mario Murillo

Note here the battle Murillo is engaged in. It has nothing to do with the cause of Christ. Instead of Christians, Mario is obsessed with Americans. Instead of their salvation, he is obsessed with his perceived infringement upon "freedom." When he refers to preacher taking a stand, he is referring to those willing to preach politics instead of the gospel. It is not a surprise to see their churches grow since the political message of blaming the other side feeds the carnality we desire as sinful human beings. There is no power of the Holy Spirit in churches that compromise the gospel, full stop.