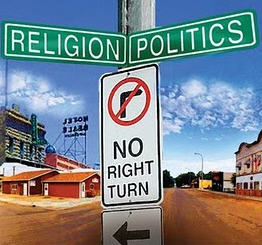 The NAR dominionist will go to extreme lengths to assuage themselves that their idol worship of this world and this country is somehow biblical, when it clearly is not. The usual refrain is about how the founding fathers were all evangelicals who secretly entered into a covenant relationship with God. Then, ignoring the glaring sins of this country they pretend everything was Shangri-La for two centuries until the godless liberals in this country somehow convinced everyone to break this imaginary covenant. They spend the days now chasing a mythical "revival"; hoping beyond hope that if the goats in this country just started behaving better than maybe God would spare His coming wrath.

In one of my recent online discussions someone was defending the NAR concept of the seven mountains false worldview. He asked what my worldview was and I explained that it was biblical. That we are not of this world and it is passing away. To that he responded with the above article. I had never heard of "American Vision" but given the name and the fact that it claims be a Christian resource, it is obviously NAR dominionist. Under their statement of faith came this little gem:

"We believe that God has given to mankind the duty to exercise dominion over His creation so that in all things God is honored and glorified. From the beginning, God created man to worship and serve Him. As a result of God's justifying grace, we are called as believers to live a separated life unto God according to God's Word. We have been called to make disciples of all the nations of the earth by preaching and teaching all things He has commanded us. It is the duty of believers to apply God's Word to every area of life, and to bring all things under the Crown Rights of Jesus Christ seeking the transformation of our culture." -- American Vision

Dominionists often misunderstand the concept of "exercising dominion." As believers we are to apply the word to every area of OUR life, not to smack unbelievers upside the head until they conform. Christianity is not a forced choice. You present the Gospel and let the chips fall where they may. If the Crusades taught us anything it is that you cannot force Christ upon anyone. The real problem here is the seven mountains nonsense about bringing all things under Him seeking transformation of our culture. This is of course mandated NOWHERE in scripture. It resides in the wickedly deceitful hearts of those who idolize this country. We are not called to transform a fallen culture but rather to save people out from it. When Jesus walked the earth His disciples desperately wanted Him to transform their oppressive culture but His kingdom was not of this earth. His deliverance was so far above the petty politics of His day or our day. His deliverance was from sin and the bondage of Satan. So let us reason together once more through the above linked article and peer into the mind of someone who worships America over the God they claim to serve.

"I saw the following posted on Facebook. A number of Christians responded with "Amen": This world is not your home. God is your father. Heaven is your home. You're going there. Be hopeful." -- John Piper Too many Christians are caught between "This World Is Not My Home" (false) and "This Is My Father's World" (true), and it's destroying the impact the church could be having on this world. Richard V. Pierard comments: In the nineteenth century . . . German Lutherans made a strong bifurcation [separation] between the realm of public and private concerns". Religion was the domain of the inner personal life, while the institutional and external, the public, so to speak, belonged to the worldly power. Redemption was exclusively the province of the church, while the law, determinative for external conduct of human affairs, was solely the province of the state. Religion was a private matter that concerned itself with the personal and moral development of the individual. The external order--nature, scientific knowledge, statecraft--operated on the basis of its own internal logic and discernable laws." -- Gary DeMar