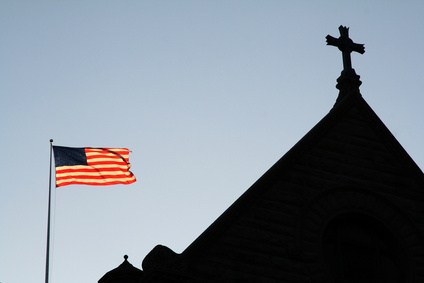 Most people caught up in the NAR think they are somehow doing God's will. They honestly believe that God wants them to get entangled in the carnality of politics. They confuse the personal conviction of the Holy Spirit within the believer with behavior modification of the lost. Many are low hanging fruit for one who discerns, such as Bill Johnson. Others have built up street cred for decades only to now blow it by supporting the unsupportable. Such is the curiously sad case of Dr. Michael Brown, learned theologian, esteemed author and NAR stooge. With each passing day Brown forgets His Lord and Savior in favor of the new god he serves -- America. Dr. Brown has long given up the pretense of being unbiased as he has fully bought into the NAR model that excoriates the Democratic Party and infers righteousness to the Republicans. An odd way to approach evangelism, Brown starts by alienating half the people who need the Gospel. He does so in such a rude manner as well, painting with a broad brush. Everyone who agrees with him is deemed worthy and those who oppose are mocked and sneered at. His latest offering is linked above asking if we remember when both parties sounded patriotic. Confrontational and delusional, this reveals how embedded his hatred has burrowed down. So, let us reason once more beloved remembering the key verses that Dr. Brown has obviously forgotten. As followers of Jesus Christ we are NOT supposed to be taking carnal sides. We are in fact pilgrims and sojourners merely passing through on our way to our true citizenship, which is found only in heaven. The passions of politics are but one of the sins that wage war against our soul. We must realize that those we come into contact with need to know the biblical truth of the Gospel and not our fleshly opinion about the politics of man. Our dealings with the world are supposed to be honorable, unlike the arrogance of Dr. Michael Brown.

'It wasn't that long ago that both Democratic and Republican presidential candidates sounded proud to be Americans. That, broadly speaking, both parties sounded patriotic, deeply appreciative of our heritage. That is certainly not the case today. One party is proud of America, the other ashamed. One party recognizes the serious errors of our past but sees a greatness beyond that. The other party sees us as defined by our errors and failings. On Saturday, I tweeted, "Do you remember the day (not that long ago) when both the Democrats and Republicans sounded patriotic?" In response, Raymond E. Grim commented, "This 4th of July I really saw the separation between the Rs and Ds on love of our country. The Rs talked about the greatness of our country. The Ds complained about President Trump and patriotism." And my colleague at Stream.org, John Zmirak, wrote, "Yep. The VENEER of patriotism was kept up under Obama, but only to allow him to 'fundamentally transform' the country. (Remember Michelle wasn't proud of America till HE GOT ELECTED.)"' -- Dr. Michael Brown

This is embarrassing to even have to discuss as Christians because it is nothing short of idol worship. First of all, the misrepresentation of Michele Obama's point is criminal here. Her point was celebrating the election of the first black president. This should be a point of national pride for all Americans, you know -- patriotism? However, many prefer to misrepresent and marginalize the first black president. We see right from the beginning that patriotism can mean different things to different people. For some it is looking back at the injustices done to African Americans in our name and how the election of Barack Obama is a time to celebrate. Not for policies but for progress. For other people, patriotism apparently means stealing the 4th of July for political purposes. Giving speeches as president instead of letting the people celebrate. If anyone thinks the military preferred to be marching in a parade in 90-degree weather instead of being home with their families -- then your faux patriotism is really about you. Are we seeing the fact yet that patriotism is expressed differently by different people? For some it may be blind allegiance to whatever your country does. Most would consider this the type of "patriotism" seen the third world dictatorships, but I guess that can be one definition. For other people, patriotism can be filled with pride for the progress a country has made. Is one less or more patriotic than the other? I will leave that to carnal pundits because the larger point for us is it has nothing to do with the cause of Jesus Christ and His Gospel.

It is not surprising that it was a Republican, Senator Ted Cruz, who exposed Colin Kaepernick's selective quotations from Frederick Douglass, which Kaepernick posted on July 4th. The former NFL quarterback wanted Americans to remember the perspective of Douglass, who famously said, "What have I, or those I represent, to do with your national independence? This Fourth of July is yours, not mine" And, "There is not a nation on the earth guilty of practices more shocking and bloody than are the people of these United States at this very hour." Sen. Cruz pointed out that this speech was delivered in 1852, more than a decade before the Civil War. That makes a big difference. Cruz then cited some of the closing words of this important speech, which included: "Allow me to say, in conclusion, notwithstanding the dark picture I have this day presented, of the state of the nation, I do not despair of this country. There are forces in operation, which must inevitably, work the downfall of slavery. 'The arm of the Lord is not shortened,' and the doom of slavery is certain." And, "I, therefore, leave off where I began, with hope. While drawing encouragement from 'the Declaration of Independence,' the great principles it contains, and the genius of American Institutions, my spirit is also cheered by the obvious tendencies of the age."' -- Dr. Michael Brown

When you take one side regardless of the truth is when you end up sounding like a shill. Ted Cruz did not "expose" Kaepernick. The blacklisted quarterback tweeted a quote from Frederick Douglass:

"What have I, or those I represent, to do with your national independence? This fourth of July is yours, not mine"there is not a nation on earth guilty of practices more shocking and bloody than are the people of these United States at this very hour." -- Frederick Douglass

Credentialed Minister of the Gospel for the Assemblies of God. Owner and founder of 828 ministries. Vice President for Goodwill Industries. Always remember that in all things God works for the good of those who love Him and are called according to (more...)
Related Topic(s): Christianity; Evangelical, Add Tags
Add to My Group(s)
Go To Commenting
The views expressed herein are the sole responsibility of the author and do not necessarily reflect those of this website or its editors.