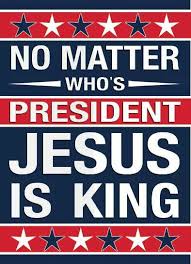 When they found him on the other side of the sea, they said to him, "Rabbi, when did you come here?" Jesus answered them, "Truly, truly, I say to you, you are seeking me, not because you saw signs, but because you ate your fill of the loaves. Do not work for the food that perishes, but for the food that endures to eternal life, which the Son of Man will give to you. For on him God the Father has set his seal." - John 6:25-27 (ESV)

Last week we examined part one of this article series from Charisma News and author Wayne Grudem. Mr. Grudem is an NAR political operative disguised as aa Christian. He is cut from the same heretical cloth as Franklin Graham or James Dobson. His goal as all dominionists, is to conquer the seven cultural mountains and "revive" the world. Dominionism is why the church loves the world in these end days. It is a focus away from the eternal and onto the carnal. Grudem's article lays out ten points about whether pastors should preach politics. The final three points Wayne says will be his preference for the upcoming election, wink wink. Gee, I wonder what his preference will be! It sure won't be Jesus. Any day the church is fighting for this world instead of the Gospel is another day the devil wins, period full stop. Let us continue in our delve into the mind of this dominionist, who is trying desperately co-opt Christian votes.

"6. Some people may leave your church, but the question is, have you been faithful to God? Just last week a pastor told me that when he gave a message on political issues, one couple became angry and left the church. I replied that does not mean he was wrong. It may just mean that he was faithfully teaching the Word of God and they rejected its teachings. (Later he told me that he had had a good conversation with them, and they decided to return.) People walked out on Jesus when He began to preach unpopular truths (John 6:66), and the people in His hometown of Nazareth were so troubled by His teaching that they even tried to throw Him off a cliff (Luke 4:29). Paul was a remarkably successful evangelist to the Gentiles, but opponents who disliked his message eventually drove him out of Antioch, Iconium, Lystra, Thessalonica and Berea (Acts 13:50;14:5-6, 19; 17:5, 13-14). Yet at the end of his life, he had the joy of knowing that he had been faithful to God: "I have fought a good fight, I have finished my course, and I have kept the faith" (2 Tim. 4:7). If you believe that God is calling you to speak on some political/moral issues, it is important to settle in your mind beforehand that a sense of God's approval on your speaking will be more valuable to you than avoiding the (possible) loss of some friendships and supporters. That is a decision that only you can make. And who knows if God will bring more people to your church in response to your faithfulness?" - Wayne Grudem

This is where the dominionists go off the rails. The assumption made by Grudem is made by all who worship this country over God. They assume their position is righteous and thus those opposed are not. Politics is the art of two different sinners who believe their way of sinning is superior for the carnal culture to adopt. If the pastor in this example was teaching the word of God then he never would have broached the subject of politics at all, let alone pick sides of which group of sinners is better. To then crudely mix in when the people left Jesus is just a mangling of scripture. They left because they refused to hear the deeper truths of God. They left because they were seeking Jesus for carnal reasons, as the key verses from earlier in the text displays. This conversation happened shortly after the feeding of the five thousand. Likewise the NAR dominionist has his fill at the trough of the world and seeks Jesus only to expand their fill. The deeper truths of the bible? The Gospel? That's for suckers. Especially when you can regale your sheep with tales about how righteous the Republican Party is. Ugh. There is a "tell" here from Grudem. Look, either I am right and the Gospel is preeminent, or the dominionist is right and preachers need to sermonize politics. Yet Grudem leaves it up to this nebulous sense of if you feel God is "calling you" to preach politics. Somewhere, deep down, Grudem seems to know his position is unbiblical.

"7. Pastors today have an unusual opportunity to influence the direction of history. Will it make a difference whether you speak on politics or not? Yes, it will make a difference. I recently spoke at a local church about the issues at stake in this election, and what surprised me was the thoughtful, mature people who came up to me afterward and said, "Thank you for that clear explanation. I was so confused. I didn't know what to think." In my opinion, most pastors would be amazed at how many people in their churches aren't sure how to vote this year, and aren't even sure if they will vote at all. What if you persuaded just 10 people to vote who otherwise would not have voted? Then if only 1,000 pastors like you influenced just 10 people to vote, that would be 10,000 additional votes. (Remember, George W. Bush won the presidency in 2000 by just 537 votes in the state of Florida.) And you might persuade more than 10 people. "In the morning sow your seed, and in the evening do not let your hand rest; because you do not know which activity will find success" (Eccl.11:6a). The nation is at a decision point, and you have a unique opportunity to influence the outcome. Will you succeed? Will your preferred candidate win? No one knows. The question is whether you have done your part. In years to come, will you be able to look back on 2020 and know that you were faithful to God's guidance in doing what you were able to do?" - Wayne Grudem

Once again, Grudem falsely concludes that his analysis is what God wants. The church speaking out can have dramatic effects but that does not mean it is what God commanded. Look at where Grudem's focus is. As all good little dominionists, he is solely focused on this world. In years to come and pastors look back on 2020 they should only ask themselves if they preached the Gospel. God does not ask pastors to preach politics. God does not need pastors to preach politics. It is interesting that Grudem does not hide his motive. He wants preachers to persuade sheep to vote his way. Disgusting.