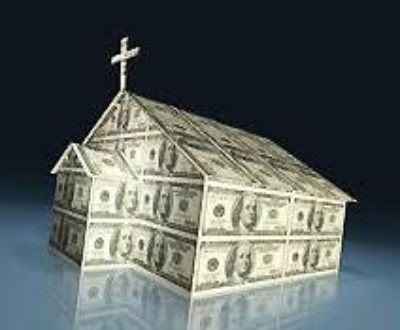 The NAR purpose driven church needs money. By design it requires cash to pay the cult of personality preachers exorbitant salaries and to establish an infrastructure that can handle the mega-church crowd. The fundamental flaw in this is that the responsibility for horizontal church growth is actually God's, according to the key verses today. This is the model for the New Testament church. The body of Christ devotes themselves to the word of God, breaking of bread, and fellowship while God adds to their number as He sees fit. The NAR purpose driven model however flips this backwards as the shepherd becomes a CEO who no longer has time to teach and feed his sheep because they are too busy trying to do God's job and add to their number daily. This model is reliant solely upon man and thus it needs a never-ending cash flow. If left up to people who are truly saved, the money would not be an issue because we are cheerful givers to the work of the Lord. The problem is the vast majority of people in the apostate church system are unsaved and goats believe the things of the Lord are foolishness. So the false NAR purpose driven pastor must force the giving through the false tithing system. They create a quid-pro-quo on behalf of God and claim that monetary giving is the key to being blessed by God. Christianity becomes a matter of what God can do for me instead of what He has already done. The above link is to another tithing defense article, by Doug Stringer, that rehashes some of the tried and true bible mangling and mixes it with some general truths just to muddy the waters. Let us reason together once more.

"Are we robbing the Lord when we make excuses like, "I don't have enough time to prioritize spending time praying and talking to God or reading His Word"? We must look honestly at what takes up our time. Are television and entertainment worthy of greater honor than God? What about our finances? We're always saying we don't have enough when it comes to giving to the things of God. There's always an excuse, but I learned a long time ago when I was in the fitness business and the business world, people will always afford what they really want. If we're really honest with ourselves (and there's something about being honest that attracts God's presence), we tend to prioritize those things we really want. And oftentimes, the things of God are put at the bottom of the list. I've heard people say, "Well, I can't afford this, and I can't afford that, or I can't do this, and I can't do that." But when it comes down to something they really want, they always find a way to buy that favorite clothing item, to buy that newest electronic component or to afford that special trip. However, when it comes to prioritizing the purpose of God and seeking first the kingdom of God and His righteousness, we tend to give that a lower priority." -- Doug Stringer

Like any good abusive tithing teacher they mix in non-monetary issues in order to pretend they are not basically asking for ten percent of your income. No, it is about prayer and reading His word, oh and of course your money, wink wink. No sooner are the side issues brought up that they come back to what they are really preaching about -- cold hard cash. Stringer is not necessarily wrong that we tend to prioritize what we want. The real question then is why are they not prioritizing giving to the church? Purpose driven pastors do not want to go there because they will be forced to deal with the fact that they do not preach the Gospel and thus are actually saving nobody. Instead of doing the work of a shepherd and allowing the Holy Spirit to draw people unto Him, they are left with convincing the goats through intimidation, bible twisting, and blessing promises to please show them the money.

"Remember, the Word says very clearly "Seek ye first"; in other words, prioritize first the things of God. So often we rob God of our time, talent, resources and giftings yet we expect the best from God in return. If we're offering God the equivalent of lame, blind and blemished sacrifices by withholding our talents, our devotion and resources from God, then we are robbing Him of what is rightfully His, and exchanging His blessing for a curse." -- Doug Stringer

Yeah, no. This is the false narrative they create to scare people into giving them 10% of their income. That God has one hand filled with untold blessings and the other filled with vile curses and unless you pony up the dough, you get the curses. Abusive tithing mogul Robert Morris wrote a book on this called The Blessed Life. He teaches, as do many within the NAR, that unless you give the first ten percent to him each month, God will curse all of your money. He specifically says to not pay the electric bill or medical costs until he gets his cut. The ironic thing is the seek ye first verses are Jesus teaching to not be concerned with materialism on this earth.

"You know, fear and greed are the two main forces that influence believers to rob God. Those in bondage to fear or greed experience little of the blessings of God, but God's Word provides a solution. He says this in Malachi 3:8-11: Will a man rob God? Yet you have robbed Me. But you say, "How have we robbed You?" In tithes and offerings. You are cursed with a curse, your whole nation, for you are robbing Me. Bring all the tithes into the storehouse, that there may be food in My house, and test Me now in this, says the Lord of Hosts, if I will not open for you the windows of heaven and pour out for you a blessing, that there will not be room enough to receive it. I will rebuke the devourer for your sakes, so that it will not destroy the fruit of your ground, and the vines in your field will not fail to bear fruit, says the Lord of Hosts. What a powerful promise was given in this Scripture. If we stop taking from God (robbing Him of our time, talent and resources) and quit giving Him the worst of our day, but instead give Him the best of our time and our talents, our gifting, our resources and our finances for the kingdom of God, then we will have blessings only He can bestow. Let's give the Lord the best of our time, the best of our resources and the best of our talents and giftings. He promises to work supernaturally on our behalf when we do." -- Doug Stringer

Credentialed Minister of the Gospel for the Assemblies of God. Owner and founder of 828 ministries. Vice President for Goodwill Industries. Always remember that in all things God works for the good of those who love Him and are called according to (more...)
Related Topic(s): God; Tithing, Add Tags