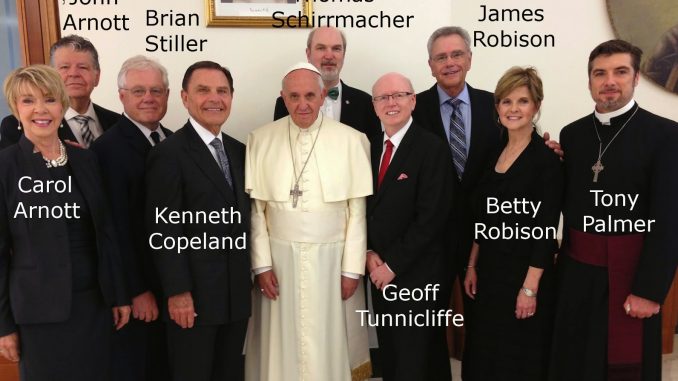 I appeal to you, brothers, to watch out for those who cause divisions and create obstacles contrary to the doctrine that you have been taught; avoid them. For such persons do not serve our Lord Christ, but their own appetites, and by smooth talk and flattery they deceive the hearts of the naive. -- Romans 16:17-18 (ESV)

For I am not ashamed of the gospel, for it is the power of God for salvation to everyone who believes, to the Jew first and also to the Greek.

I am astonished that you are so quickly deserting him who called you in the grace of Christ and are turning to a different gospel-- not that there is another one, but there are some who trouble you and want to distort the gospel of Christ. But even if we or an angel from heaven should preach to you a gospel contrary to the one we preached to you, let him be accursed. As we have said before, so now I say again: If anyone is preaching to you a gospel contrary to the one you received, let him be accursed. For am I now seeking the approval of man, or of God? Or am I trying to please man? If I were still trying to please man, I would not be a servant of Christ. -- Galatians 1:6-10 (ESV)

Only let your manner of life be worthy[ of the gospel of Christ, so that whether I come and see you or am absent, I may hear of you that you are standing firm in one spirit, with one mind striving side by side for the faith of the gospel, - Philippians 1:27 (ESV)

The bible prophesies in Revelation the state of the world leading up to the second coming of our Lord Jesus Christ. While the date cannot be known, the birth pains can be felt, and one area of Eschatology experts agree on is the establishment of a one world religion. We need to be ever vigilant against the calls for false unity, which are heard nearly every day from the purpose driven industrial complex. To them, a unified church means more suckers to sell their wares to. To Satan however, it means unifying the people of God in something other than His Gospel and we need to make sure that the true remnant stays unified in Christ. The above link is to the most recent call for false unity. So, let us reason together once more and be reminded what we need to be watchful for.

This week, we are in the midst of praying through the 40-day Jewish season of repentance, Teshuvah. The word "Teshuvah" literally means to return to the presence of God. It is a season of introspection and repentance for Christians to come into unity with God, as Jesus prayed in John 17:21. However, as Jesus prayed, unity with God also requires unity with each other in Christ (John 17:20-23). Yet, almost since the beginning of Christianity, believers have quarreled about Christian doctrine and church government. The first Jerusalem Council served as an example of a favorably resolved dispute (Acts 15). However, other disputes resulted in division and treatment of opponents as non-Christians. As Ralph Martin famously said, "The body of Christ is broken." Today there are many denominations and doctrines which create a great diversity within the body of Christ. Yet, we can still be united in Christ. Lutheran theologian Oscar Cullmann said, "Unity in the church ... is unity in diversity ... recognizing others in all their variety as true Christians." -- Ron Allen

Would it surprise you to learn that there is no Christian season called Teshuva? Or that the word actually means to simply repent? When scouring the Jewish calendar, we see no such record of the season of Teshuva. The only Christian referent we could find was to the wildly heretical ministry of Perry Stone. So, the notion that this Jewish word for repentance is secretly a season for Christians to return to the presence of God, be introspective, and come into unity is absolutely made up. The entire thing is a work of fiction. Christians have quarreled since the beginning because God is so clear about being careful to avoid false doctrine. Paul only tells Timothy to guard two things. His life and his doctrine. His doctrine because the eternal lives of his listeners is at stake. Our first key verse is crucial to understanding unity because disunity is sown in the body through the admission of false teaching. Most charlatans point to discernment ministries or people criticizing what is false as the source of disunity but it is their false teaching that divided the body to begin with. The second key verse is crucial to remember that only the Gospel, the true Gospel, has the power of God to save someone. What does that mean preacher? That means without the preaching of the uncompromised Gospel of Jesus Christ, no one gets saved -- period, full stop. I have had well intended people ask me if people can get saved through a heretical ministry such as Joel Osteen's and the answer is no. Not according to the bible anyway. Now, can Osteen force someone to seek the truth and thus get saved by someone else presenting the Gospel? Of course, but that person is saved in spite of Osteen, not because of him.

Credentialed Minister of the Gospel for the Assemblies of God. Owner and founder of 828 ministries. Vice President for Goodwill Industries. Always remember that in all things God works for the good of those who love Him and are called according to (more...)
Related Topic(s): Christianity; God, Add Tags