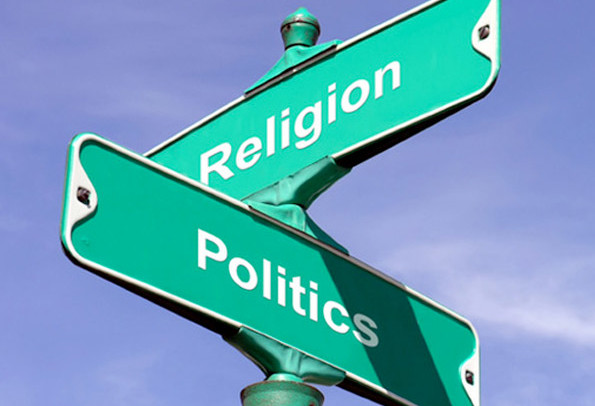 if my people who are called by my name humble themselves, and pray and seek my face and turn from their wicked ways, then I will hear from heaven and will forgive their sin and heal their land. -- 2Chronicles 7:14 (ESV)

One of the largest planks in the NAR platform is the seven mountains garbage that makes up their dominionist agenda. The complete teaching actually says that Jesus Christ cannot return until the church conquers these seven cultural mountains, of which government seems to always be the focus. Why? Because government is where the money is. Government is where the power is. Government is where we can stand on our self-righteous pedestal and deride those that we now deem lesser than us. The lowly. The reprobate. The sinner. As long as our focus is squarely on others, we can never see our own sin. Yet even in the Old Testament God made clear that it requires people who are known by His name to repent and turn from their wicked ways in order for the land to be healed. Why? Because the people called by His name should know better. People in the world behave as they do because they do not know our Lord and Savior and as such the things of God remain foolishness to them. Yet when we read the key verse we also see that the land is sick because of the people of God. The church is supposed to serve a role for God. it is supposed to be a shining city on a hill that does not compromise with this world. Instead, the unsaved see the church for the hypocritical vessel it has become. Why would they want what we have when it is the same thing they already have and they do not need to get up on Sunday mornings for it?

"Preachers and all Christians who actually apply their faith to politics are the great final barrier to the corrupt socialist/communist agenda that has infiltrated our American society. This is why they are now being targeted. There are humanistic ideologies and demonically designed strategies that have infiltrated our educational institutions and the political realm, and yes, even the church, that are moving us toward universal egalitarianism and a cultural Marxism. Could this be the manifestation of the spirit Kenneth E. Hagin saw in an incredible 1963 vision?" -- Bert Farias

That is a lot of big fancy political words but let us start with the notion that if you are citing Kenneth Hagin as the source for your inspiration -- I guess we know why you are a heretic. Kenneth Hagin was one of the most egregious false teachers of the last century. He founded word faith heresy that gave us Creflo Dollar, Joyce Meyer and even the likes of Joel Osteen. Any vision he had was from the devil and you should not basing your theology upon it. Nonetheless, this is the false narrative that NAR dominionists always put forth. Seeking to divide people against each other they set up the godless communist/socialist on one side and pretend that God is squarely on their side and therein lies the rub. God is on no side. He is above the politics of man. He cares about the cause of the Gospel, which is the only thing that has His power to save anyone.

"I believe the greatest enemy in decadent times like these may be the sleepy, lukewarm and deceived church. A subversive effort by the leftist-leaning liberals to infiltrate the church and turn people away from the real gospel and true doctrine is gaining momentum in this hour. The purpose of this agenda is to sway the church toward a radical political movement and the spread of socialism and atheistic, hatred-inspired, communism in our nation. (Enemies Within The Church) ("The Corruption Of American Christianity") ("The Corruption Of American Christianity -- Part 2") Many professing Christians would mock and scoff at such a notion. They easily yield to that old devilish compromise and serpentine excuse that comes creeping in, that says: "don't preach on politics"; "don't mix politics with religion" and "God is not interested in politics." Wrong." -- Bert Farias

This is so sad. The enemy has infiltrated the church and has led untold numbers away from the Gospel but Bert Farias is leading the cause. NAR dominionism proceeds from the perspective of American exceptionalism. The Gospel transcends all culture and nations. Farias represents the corruption of the American church. He has already cited Hagin and is a regular contributor at Charisma News, a virtual cesspool of false doctrine. Here he actually cites himself in other articles he has written. One of the biggest reasons why the Gospel is no longer preached in churches is they are too busy enraptured by the politics of this world. Let's debunk this nonsense right here. Is God interested in politics? Absolutely not. First of all, we have the life of Jesus Christ to examine. Jesus was entirely apolitical when He ministered. They want my tax? Go catch a fish. Realize the disciples all wanted Him to be political. They felt the Messiah would deliver them from the oppression of Rome. The Gospel message however was to deliver them from the oppression of Satan and sin. That Gospel message is the same today yet the Bert Farias' of the world are hoping He will deliver us from the oppression of a political party. Neither political party in this country cares one iota about the cause of Jesus Christ. Politics is fighting over the deck chair arrangements on the Titanic while the Gospel directs people to the lifeboat.

Credentialed Minister of the Gospel for the Assemblies of God. Owner and founder of 828 ministries. Vice President for Goodwill Industries. Always remember that in all things God works for the good of those who love Him and are called according to (more...)
Related Topic(s): Christianity; God; Religion, Add Tags
Add to My Group(s)
Go To Commenting
The views expressed herein are the sole responsibility of the author and do not necessarily reflect those of this website or its editors.