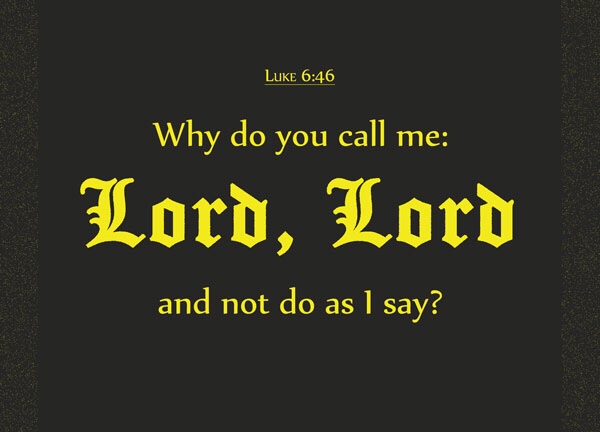 We often compartmentalize scripture, often into such minute portions that the overall context and thus message are lost. In a microwaved church we know more verse snippets than we do the point God is trying to make. This devotional was originally going to exegete Matthew 7:21-23, perhaps the most sobering portion of scriptures for believers to consider. When placed into further context by examining the previous and following sections, we can gain even clearer perspective. These all came from one teaching Christ made that covers a few chapters in Matthew's gospel, the Sermon on the Mount. Remember that chapters and even verses were added centuries after the actual words were spoken. Jesus did not teach in a staggered manner. Sure, there were plenty of shifts in topics but these three sections we will examine today all seem relevant to each other for our consideration. Let us start with the previous section:

Beware of false prophets, who come to you in sheep's clothing but inwardly are ravenous wolves. You will recognize them by their fruits. Are grapes gathered from thornbushes, or figs from thistles? So, every healthy tree bears good fruit, but the diseased tree bears bad fruit. A healthy tree cannot bear bad fruit, nor can a diseased tree bear good fruit. Every tree that does not bear good fruit is cut down and thrown into the fire. Thus you will recognize them by their fruits. - Matthew 7:15-20 (ESV)

Jesus begins here teaching about false prophets. This is a subject that is taught consistently throughout the bible yet the church today seemingly turns a blind eye to this cancer within the body of Christ. The vast majority of what we know as church today is simply apostate. It is not the church as God outlined. It is filled with false teachers and prophets. It is purpose driven but that purpose is not Christ. I remember once Joel Osteen defended his heresies by stating that he did not think he needed to tell people what they have done wrong (sin) because we already know what we have done wrong. This is of course wildly inaccurate and biblically absurd. We might know what we have done but do not ascribe it to being wrong or simply do not care what God actually thinks about it. Osteen is far from alone. Nearly every preacher you know from national platforms has compromised the Gospel to the point that it no longer can save anyone. Read Acts Chapter 20 and see what Paul declares to the Ephesian elders. That because he has not hesitated from teaching the entire Gospel, without reservation, their blood is not resting upon him. Because the purpose driven mindset teaches that bigger is not only better but blessed, we confuse approval from the world with approval from God. Paul Washer once famously quipped that Osteen is judgment upon anyone willing to sit through his sermons!

So, Jesus first teaches us that prophets come to us in sheep's clothing. We all know this verse but do we really understand what Jesus is saying here? False prophets do not enter our churches with neon signs declaring their falseness. Far too many Christians today are willing to accept anyone who can spell Jesus correctly. I call this the Michael Brown Syndrome. Dr. Brown will never say anything negative about any other teacher that declares he or she is Christian, regardless of if he has even written books against the doctrine they preach! False prophets and their ministries are not redeemable. If only we would show the same concern for the victims of false theology as we do for the wolves that teach it. That is the second point Jesus makes here. Behind the sheep's mask, they are actually ravenous wolves. Ravenous is defined as extremely hungry and their food is the sheep of the Lord. They are not passive in what they do. They are voracious. They devour the sheep. Jesus does not teach this so that we might be scared but rather so we might be prepared. He makes some pretty definitive statements here. Yes we will know them by their fruits but Jesus takes it farther than that. A healthy tree cannot bear bad fruit and a diseased tree cannot bear good fruit. There is no middle ground. A wolf is not sometimes a wolf. He or she is all in. We see the church embrace the exact opposite of this teaching day in and day out. It seems as if we try to excuse the wolf. We hear trite sayings like eat the meat and spit out the bones but that is simply not possible according to our Savior here. Joseph Prince preaches many things that are correct but the portions that are not will send you straight to hell. The devil always mixes some truth with his lies because otherwise it is too easy to spot. We can easily dismiss charlatans such as Kat Kerr who claims to have visited heaven over 50 times but with some of the cleverer false teachers we cling to the slivers of truth and use them to excuse their damnable heresies. So, Jesus clearly wants us to recognize them by the evil fruits of their teachings but what do we do with that recognition? Knowledge without application is useless. Somewhere we know that Hillsong is wildly wicked but we still buy their new albums and sing their songs during worship. We must recognize them first and then according to scripture, we are to mark them as false and avoid them at all cost. Even if we think we can handle the falseness, what example do we set for those who may not have our level of discernment? Not to mention that when we dance with darkness, eventually we will think it is light and as Jesus taught, how deep is that darkness! As we move into the second set of scriptures we see the cost of following false teachers or thinking we simply know better.

Take a good long look at these verses beloved. Jesus is not messing around here. The price for following what is false can be your very soul. Picture this in your mind's eye. These people in these verses are very churched people. These are not people who lived an agnostic life. These people were clearly deceived. They spent their lives thinking they were saved. They spent their lives believing they were serving Christ. Remember when I said that it seems that we accept anyone who spells Jesus correctly? Well, not everyone who says 'Lord, Lord' will enter the kingdom of heaven. Knowing His name is not enough. Saying it twice is not enough. Serving in your local mega-church is not enough. Doing your faux missions trips is not enough. Singing in the choir, having a prayer closet, speaking in gibberish, dropping to the ground when someone lays hands on you, even studying to and eventually preaching is simply not enough. Not without sound doctrine. Calvin is credited with saying that zeal without doctrine is like a sword in the hands of a lunatic and there are plenty of lunatics standing in the pulpits today. Think of the lunacy of the Toronto heresy where congregants rolled around on the floor laughing incoherently or barked like a dog. Think about the Kundalini spirit that engulfed Brownsville. Think about the lunacy of Bethel that fakes gold dust, gemstones and glory cloud manifestations. Or about their grave sucking or dead raising team. Think about the lunacy of Rodney Howard Browne and his drunk in the spirit nonsense. Then realize that the entire evangelical world rallied around him when he refused to close his church when COVID broke out. Mike Bickle, Francis Chan, or Todd White, who was caught faking the growing leg scam on film! This list can go on and on but the point in each case is the lunacy embraced by what passes for the church today. Now think about those in local gatherings who stay because their friends are there, or the nursery services are really good. Or the coffee. Sheer and absolute lunacy.

So, who does enter the kingdom of heaven then? The bible says the way is narrow and few are those who find it. Only those who do the will of the Father. Modern Christianity is obsessed with relationship Jesus. He is reduced to your buddy or wingman. So many mock religion, which Christ did set up, in favor of this carnal relationship paradigm. Let me let you in on today's deep theology. Unless your relationship is one of Lord and servant, it is not Jesus you are in relationship with. Oh, and in case you are confused. He is the Lord and we are the servants. Wait a minute preacher! Doesn't He call us friend? Try reading the following verse:

Credentialed Minister of the Gospel for the Assemblies of God. Owner and founder of 828 ministries. Vice President for Goodwill Industries. Always remember that in all things God works for the good of those who love Him and are called according to (more...)
Related Topic(s): Christianity; Prophet, Add Tags
Add to My Group(s)
Go To Commenting
The views expressed herein are the sole responsibility of the author and do not necessarily reflect those of this website or its editors.