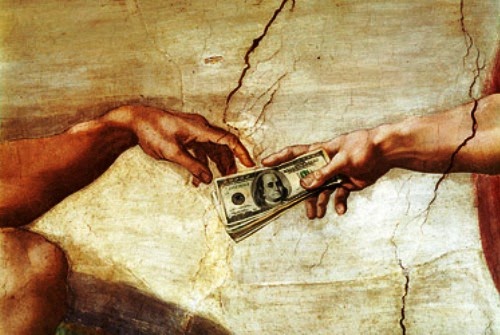 Christianity is about God. That is right. It is not about us. Yet man has been seeking to recreate God in his image since time began. Satan wanted to be God. Eve wanted to be like God. So it goes on and on. Perhaps this is no more evident then when man tries to fit God into their politics. I have seen pastors post absurdities such as people could not be saved and vote for a particular candidate or party. As if when we stand before Christ our voting record will be laid bare before Him to judge. While that notion is beyond stupid and biblically ignorant, a great swath of the NAR apostate church wholeheartedly believes that today. The will spend their lives screaming at half the population for not agreeing that their carnal sinner is the one God really wants in control and your carnal sinner is the devil personified.

This problem becomes more absurd when the Christians are forced to deal with other facets of their chosen political persuasion and apply Christianese logic to them as well. Suddenly, the notion of socialism is deemed as biblical evil, even though one could reasonably construe that was the organization of the early church described in Acts. Suddenly the bible is used to defend immigration policies regardless of their lack of Christian fairness or justice. The NAR has their cute and unbiblical notion of a "biblical worldview." What this really is however is a worldview of one party and how we can shoehorn God into it. With this as the backdrop, I present the latest in this absurd slippery slope -- God is a capitalist! Yes this came as a shock to me as well but let us reason through the above linked article written by the American Pastor's Network, God help us.

'Many on both sides of the political coin have reservations about the talk of socialism creeping into the 2020 presidential election conversations. As the topic of socialism has become more prevalent in America, the American Pastors Network (APN) has explored the hot-button issue on its popular daily radio program, Stand in the Gap Today, which airs on over 400 radio stations nationwide; many carry the show live from noon to 1 p.m. ET. APN President Sam Rohrer says if he made the bold statement, "God is a capitalist," how would many react? Agree or disagree? Be indifferent? Have to consider the question further? "Or how about these questions: 'Does the Bible teach the tenets of capitalism?' 'Does God hate communism and its younger sister socialism?'" Rohrer added. "These issues are confronting the American people and our entire perspective of freedom--capitalism versus socialism--moral versus evil. Many discuss these questions politically, economically and emotionally. But we should be looking at it biblically--from the pages of Scripture--as well."' -- American Pastors Network (APN)

Yeah, standing in the gap has nothing to do with discussing human societal organizing principles. Let's deal with this NAR nonsense. Does the bible teach the tenets of capitalism? No. Does God hate communism or socialism? No. How do we know this? Because these are carnal terms made by carnal men to organize carnal societies. God could care less what system of government man wishes to employ. His concern is for the Gospel. Now the NAR will argue that the cause of the Gospel is better furthered within a capitalist society to which I would respond, really? The primary source for all false gospels today is America, a capitalist society. Yet churches such as the underground church in China are renowned for their passion and sincerity. They covet a single page of a single book of the bible while we complain if there is no close parking on Sundays. Please. Capitalism might be a better societal organizing principle for carnal reasons but it cannot be any more moral than any other because all such systems are run by immoral men.

'Rohrer added that there is a basic case to be made that God and the Bible support capitalism, why it is moral, albeit not the perfect economic system, and why the foundational principles of capitalism are moral and why socialism, communism and all the other forms of collectivism are evil. "The Bernie Sanderses and Alexandria Ocasio-Cortezes of the world want to be a part of a 'mass movement,' a movement to embrace socialism and tyrannical big government and a movement to upend capitalism," Rohrer said. "However, the Constitution rests on the foundation of capitalism and free enterprise, so this 'movement' has the aim to jettison all remaining vestiges of the Judeo-Christian underpinnings of our laws and view of life, the environment, the home and marriage as defined by God as Creator and giver of all rights. It is a movement to reject the reality of absolute moral truth accountability to God and to embrace government as God. It's also the elimination of the right to private property, the hinge pin of God's design for capitalism and the bottom-line hatred of socialists and communists. After all, it was Karl Marx himself who said in his Communist Manifesto, 'the theory of the communists may be summed up in the single sentence: Abolition of private property.'"' - APN

Capitalism is not moral. That is an absurd statement. Capitalism is what led to the slave trade. It is what led to sweatshops. It led to the plundering of nations to rob their natural resources. It now convinces American companies to have their products made in third world countries because the workers there cannot unionize. The organizing structure of capitalism is greed! How in the world is that moral? Sure, Capitalist societies also provide the most opportunities, cure disease, and a host of other positives but moral? No. Likewise the smear of Sanders and Cortez for disagreement is equally unfair. Look, you can agree to disagree with their politics but the belief that no one should die without healthcare is hardly immoral. The reality Rohrer does not want to face is that not all socialist countries are Venezuela. Our country already dabbles in its fair share of socialism with positive results. No, this is not a call for a change in America's system just a fact check on the ridiculous points that are being made. Such as the notion that all Judeo-Christian values, the home and marriage are all divinely given to us by capitalism. Well, I guess when you worship capitalism.

'Additionally, Rohrer said, the national rejection of God in the courtroom, classroom and public square is producing consequences beyond our imagination. The rise of the popularity of socialism and tyrannical government is but one indication, with radical environmentalism another. "But as economic systems are concerned, the contrast between socialism/communism and capitalism hinges on the matter of private property," Rohrer said. "Our founders knew this and it is why the debate at the introduction of the Declaration of Independence was so intense, as it stated, 'We are endowed by our Creator with certain unalienable rights that among them are life, liberty and the 'ownership of private property,' which was ultimately agreed to as 'the pursuit of happiness.' Understanding what God says about private property should dispel any support for socialism by anyone who fears God and believes the Bible."' -- APN

Credentialed Minister of the Gospel for the Assemblies of God. Owner and founder of 828 ministries. Vice President for Goodwill Industries. Always remember that in all things God works for the good of those who love Him and are called according to (more...)
Related Topic(s): Christianity; Tithing, Add Tags
Add to My Group(s)
Go To Commenting
The views expressed herein are the sole responsibility of the author and do not necessarily reflect those of this website or its editors.