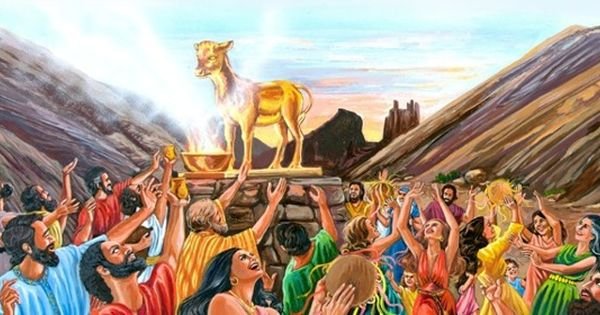 Do you think that I cannot appeal to my Father, and he will at once send me more than twelve legions of angels? But how then should the Scriptures be fulfilled, that it must be so?" -- Matthew 26:53-54 (ESV)

The dominionist wing of the New Apostolic Reformation (NAR) will stop at nothing to achieve its seven mountains mandate dreams. They have so corrupted the apostate church that well intended Christians today cannot see that they suffer from two crippling spiritual conditions. The first is Trump Idol Worship. C'mon, let's be honest here. We all know to what I speak. This is not speaking about people who voted for Donald Trump, like Donald Trump or even plan to vote for him again. We are all entitled to our political opinions. Some like his brash style of disrespect. He has had legislative victories and the economy has some positive indicators. If that is the playing field you find yourself on, this is not speaking about you. The Trump idol worshippers are those who cannot bear to hear anything negative about their idol. They advocate that Trump is secretly King Cyrus with an Elijah anointing. They pretend that because he surrounds himself with NAR false teachers such as Paula White, that Trump is some kind of hero for the Christian cause. There is no discussion to be had with an idol worshipper. You either vote with them or they have determined that you are not actually a Christian.

The second condition is Christian Electoral Myopia. These are people who pretend to be flexible with their vote but will only vote based on one issue, usually abortion. Not that their candidate ever actually does anything about abortion; just that the say they will. For the empty promise, the myopic Christian will look the other way when it comes to poverty, endless wars, and a myriad of other issues that Christians should care about. Instead, they vote for the man or woman with the "R" next to their name because they promise this time, they are going to do something. They never do of course. Christians will openly admit to voting for GW Bush because of his pro-life stance yet when he had complete control of both houses of Congress do you know how may times he brought apportion up? Zero. Yet those very same Christian votes enabled the man to start wars that led to the deaths of over one million people. I say this as a backdrop to reviewing the article linked above from NAR pastor, Shane Idleman. It is a shame because Shane often is correct on Gospel matters but he has sold out completely for the dominionist agenda, as we will soon see. Let us reason once more together.

"Like many, I'm perplexed by the divide in the Christian community over President Trump. This article has been many months in the making as I've talked to people on both sides of the aisle. And as I stated in a brief op-ed, we can't have our cake and eat it too--there is no middle ground for Christians today. You can either choose a president who will wear a Planned Parenthood scarf at her inauguration (or one of countless others who would seek to destroy the America we know and lead us down the primrose path of socialism--or worse), or you can back President Trump. There is no plan B. I'm amazed at how many pulpits are silent on this. -- Shane Idleman

Wow. Talk about being myopic! So in Shane Idleman's eyes there is no plan B to Donald Trump and the reason why is the alternative will wear a planned Parenthood scarf or magically turn this country into Venezuela. That is such an intellectually bankrupt position to start with. The boogeyman of socialism still works with the uneducated, but most realize this is a red herring argument and always has been. Even if we elected a rabid socialist they cannot unilaterally change anything without working with Congress. As for why more pulpits are not speaking to this perhaps they realize that is not their mandate? Perhaps they realize correctly that every Sunday spent talking about the virtues of any politician is another Sunday you did NOT preach the Gospel. Shane Idleman has become so infected by the NAR that he has lost his call. He needs to get back to the Gospel.

"The following seven points may help us better understand the differences between pro-Trump and no-Trump Christians. Personally, I believe that No. 7 stands above them all.

1. Some believe that Christians should stay out of politics. That may sound noble and even spiritual, but politics has been instrumental in movements to protect the unborn and the poor, to abolish slavery and secure women's rights, and to advance the Civil Rights movement, to mention only a few. Politics won't save America, but in order to implement change and help others, we must take action; hence, the political process. Politics, which once focused largely on the economy, national security and the deficit, now tackle important moral issues. These major issues have enormous implications; to remain silent actually makes a statement that we are not concerned enough. Topics considered "too controversial" are often critically important; we can no longer ignore them." -- Shane Idleman

Credentialed Minister of the Gospel for the Assemblies of God. Owner and founder of 828 ministries. Vice President for Goodwill Industries. Always remember that in all things God works for the good of those who love Him and are called according to (more...)
Related Topic(s): Christianity; God, Add Tags
Add to My Group(s)
Go To Commenting
The views expressed herein are the sole responsibility of the author and do not necessarily reflect those of this website or its editors.