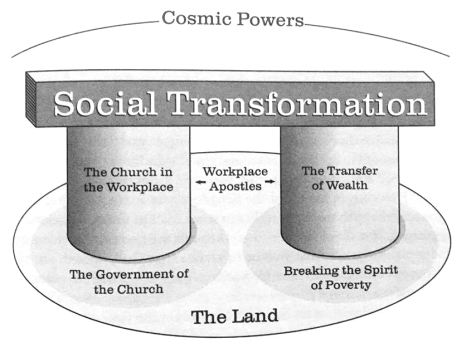 from whom the whole body, joined and held together by every joint with which it is equipped, when each part is working properly, makes the body grow so that it builds itself up in love. -- Ephesians 4:16 (ESV)

It remains one of the more elusive terms in Christendom today. It causes debate and dissent and disagreement. It is the New Apostolic Reformation and people who are clearly a part of it often feign complete ignorance to its mere existence. Its staunchest gatekeeper, Dr. Michael Brown once scoffed at the notion that it even existed. We must understand this better because the NAR is growing exponentially and is not going away. It is the primary formative group for the apostate church that the bible warns us about. It has become somewhat of a catchall phrase for various heresies and false teachings. As a result it confuses many people. There are no memberships. There are no board meetings. No churches display they are a NAR church. Due to all of the negative connotations made of it, all pastors deny being involved. I hope this endeavor clears up some of the confusion because the last thing you want is to find yourself involved in a NAR church without realizing it. So let us reason again together beloved and clear the air surrounding the most dangerous church movement today; the NAR.

First, we must understand the overarching support structure for the NAR and other apostate churches. The 1990's saw an exponential explosion of heresy within the church. This is largely because of three false church phenomena coming together at the same time. In the early part of the 90's we saw decades worth of seeker friendly theories of church growth become codified for pastors through the publication of the Purpose Driven Church (PDC) by Rick Warren. This became a manifesto for up and coming pastors for how to grow their churches into mega churches and reap the financial whirlwind for themselves; I mean for Jesus of course, wink wink. It dramatically altered church forever in four very important ways. First, it replaced the shepherd model that Jesus taught for pastors and elders with the cult of personality vision casting CEO-dude model proposed by Warren. Pastor's had to "cast vision" for their churches regarding future growth under the guise of the Great Commission. As such, they no longer had time to actually shepherd anyone so pastoral care was relegated down to lower staff and even the new "cell group" scam that was part of the purpose driven church theology as well.

The second major change was to focus the entire church on lost goats and thus starve the actual sheep that had been entrusted to the pastor. The church was now marketed to the unsaved. The sermons were thus watered down. The Gospel was the first victim of the PDC. Sin and repentance were no longer acceptable sermon topics. Instead we saw the rise of topical preaching largely based on self help and motivational models found in the world. Sermons became focused on us instead of Christ. False signs and lying wonders started appearing regularly. Gold dust and gemstones. Angel feathers and glory clouds. The 1990's also saw the absurd holy laughter debacle in Toronto and the kundalini demonic outpouring in Brownsville. The third change was in how the lost were to be viewed. Instead of unsaved, they were now considered unchurched. The damage of this paradigm shift is still felt today as the church is far more interested in attendance than salvation. Now, Warren knew that biblically based sheep would not tolerate this shift. They would do the work of a Berean and rebuke such unbiblical nonsense. So Warren created the fourth major change -- blessed subtraction. For thousands of years, the sheep mattered as in the parable of the 99 and 1 but now Warren comes along an encourages pastors to let sheep leave the fold if they dare to disagree with the new vision. When Mark Driscoll gave his famous sermon where he bragged about the pile of dead bodies he was leaving in the wake of the Mars Hill Church bus he started by saying, "I am all about blessed subtraction."

So you have the seeker friendly theories of church growth that remove the offense of the cross out of Christianity. Then you have the purpose driven church that teaches pastors how to apostatize their mega churches. The third element in this perfect heretical storm was the NAR. I myself have interchangeable used these three terms so I am sure I contributed to the confusion. I view the seeker friendly industrial complex as implementing the purpose driven church but the vehicle for the delivery is the NAR. This industrial complex is a billion-dollar venture. Besides the churches, they wield international recording cabals, itinerant preacher/prophet networks, faux international coalitions, leadership and growth experts, and of course merchandising. The number one rule is that the complex always protects the brand. While the seeker friendly theories were always in the ether, the PDC provided the blueprint for this major paradigm earthquake. The church's top priority was the Gospel and the health of the sheep but now it would be money and the Gospel was left behind. So now that we have some background let us deal with the delivery, accomplished through the NAR.

As stated, the NAR is not a particular church or even denomination. It is a loose collective term that makes up the modern apostate church. This does not mean however that we are making it up as we go along. The NAR was founded in the late 1990's by heretic C. Peter Wagner. The common belief is he was trying to pretend that God was "putting the band back together" when it came to the apostles and lo and behold -- it was Wagner and his friends! While this account is accurate it leaves so much missing from Wagner's thought process. The above link is to an old article by Wagner where he tries to define the NAR. As it is too long to go line by line, I will provide the highlights.

Credentialed Minister of the Gospel for the Assemblies of God. Owner and founder of 828 ministries. Vice President for Goodwill Industries. Always remember that in all things God works for the good of those who love Him and are called according to (more...)
Related Topic(s): Christianity; Prophet; Tithing, Add Tags
Add to My Group(s)
Go To Commenting
The views expressed herein are the sole responsibility of the author and do not necessarily reflect those of this website or its editors.