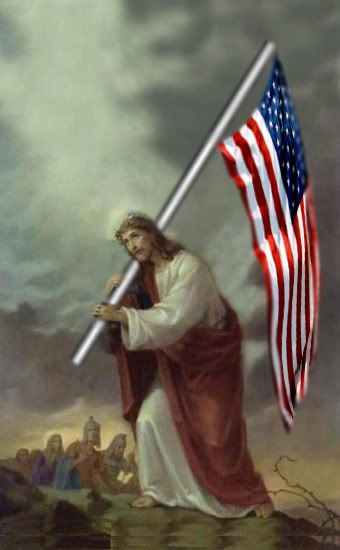 But our citizenship is in heaven, and from it we await a Savior, the Lord Jesus Christ, - Philippians 3:20 (ESV)

So starts the article linked above posted today at Charisma News by Pastor Joseph Mattera. For those who do not know Mr. Mattera he is widely known for three closely connected things. First, he is a staunch defender of the false signs and lying wonders perverting the Charismatic Church today. Secondly, he is unapologetic in his beliefs regarding the New Apostolic Reformation. Lastly, he is a rabid dominionist, which is another term for "Christian Nationalist." It seems that some of this critique must have started to bother Mattera as he literally writes this article to swear he is not the dominionist he clearly is. The reason why there was "much talk" recently abut this subject is the disgusting idol worship involving the current president from so many who have the microphone in the church. There is no line however connecting patriotism to Christian nationalism and only a dominionist trying to excuse himself would think so. You see, they are interchangeable because both are more concerned about this world than the kingdom of God. Let us reason once more as we continue through Mattera's musings:

"I am willing to die for my nation. I believe the United States of America is the greatest nation on the earth despite all its flaws and sins. Hence, I am a patriot. I support our right to have a strong military, and I believe God had a special plan for the nation from its very inception. I would love to see the United States build its laws upon the Scriptures' standard of morality and justice. I am strongly pro-life and pro-biblical marriage. I also advance a biblical worldview in many of my teachings. These beliefs do not make me a Christian nationalist." - Joseph Mattera

Beloved, stay with this rationale. Joseph Mattera is a pastor. I will assume that call on his life is genuine for the purposes of this argument. Yet his warped view of patriotism so eclipses his duty to the Gospel that he admits being willing to die for America. This is how dominionism perverts. Our responsibility is to Christ and His Gospel - not anything of this world; yet this pastor is willing to die for something completely unrelated to it. Now I also believe that in the history of pagan nations, the USA is the greatest but I do not elevate America beyond the status of pagan nation. Mattera and dominionists have this fanciful version of history where the founding fathers all spoke in tongues and were slain in the spirit after signing the Declaration of Independence. As for his list of beliefs? They are exactly what makes him a Christian Nationalist! You believe God had a special plan for your country but you do not think you are a dominionist? Are you kidding me? You would love to see your country build its laws upon the scriptures? That not only makes you a dominionist but a theocrat also! God never asked us to make our nations obey His law. He expected us to do so in our lives. Being strongly pro-life and pro-traditional marriage in our own lives is of the kingdom. Insisting that everyone believe what we do by legislation is not. Behavior modification will not save a single soul. Employing a "biblical worldview" is textbook code for dominionists. A true biblical worldview understands that this world is passing away and our job is to represent the Gospel. That means not try to save this world but rather see some saved out of it through the supernatural power of the Holy Spirit and the preached Gospel of Jesus Christ.

"I am more committed to advancing the Gospel of the kingdom of God than a set of policies of a particular political party. While being a patriot is a noble thing, it's more important for a person to be "born from above" and become part of the kingdom of God (see John 3:3-8). I am first a Christian, secondarily an American. As a Christ-follower, I am a citizen of the world; my concern is global. I desire for God's kingdom to influence every nation, not just the United States." - Joseph Mattera