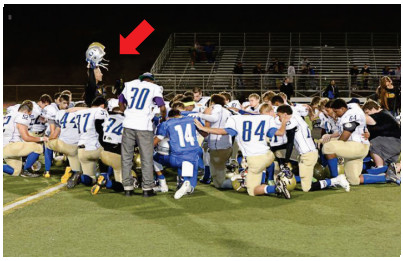 See then that you walk circumspectly, not as fools but as wise, redeeming the time, because the days are evil. Therefore do not be unwise, but understand what the will of the Lord is. - Ephesians 5:15-17 (ESV)

Lost in the arrogant victory lap being taken by the apostate church after the overturn of Roe was another crucial victory for the NAR forces of dominionism. The dominionist theology believes in a theocracy being instituted across America. A quiet scenic vista taken from a mix of Norman Rockwell, Thomas Kincaid and Leave it to Beaver. Mind you the very people clamoring for this Shangri-La of Christo-Americana would not survive an actual theocracy. You see in an actual theocracy you must actually do what God says not merely beat up other people you view as not adhering to the word. In an actual theocracy the bible applies to you - which it is supposed to do now. If we peel back the red, white and blue rhetoric what we are left with are people who gravitated towards the lure of dominionism because it gave them what they always wanted in a religion. The ability to tell others that they are to blame for every perceived wrong in life under the banner of faux-righteousness, while pretending they are heaven bound without actually repenting of any sin. As long as the tithe is in the basket and the vote is checked for the people with a little "R" next to their name. Then they get to wrap Jesus up in a barbed-wire flag and put an AR-15 in His hand and sing God Bless America on Sunday mornings. No questions are asked and no theology is questioned because the results just feel so good. As with Roe, I am sure that the decision regarding Joe Kennedy left the dominionist powers that be absolutely giddy that their hand-picked Supreme Court did their bidding once again. This heretical myopia however is not good for the cause of Christ and portends possible larger problems for Christian faith in the future. Let us reason once more through the above linked article from Charisma News, via CBN News.

'The Supreme Court ruled 6-3 Monday morning in favor of a Washington state high school football coach who was fired from his job for silently praying on the field after games. Coach Joe Kennedy has been battling the Bremerton School District since 2015. The district claimed that his prayers violated the Establishment Clause of the U.S. Constitution. But the high court has now ruled that Bremerton School District actually violated Coach Kennedy's First Amendment rights. SCOTUS Blog tweeted, "SCOTUS sides with a high school football coach in a First Amendment case about prayer at the 50-yard-line. In a 6-3 ruling, SCOTUS says the public school district violated the coach's free speech and free exercise rights when it barred him from praying on the field after games."' - CBN News

There is a lot of disinformation in this story as well as the decision. Joe Kennedy was not "silently praying" or expressing his own personal religious observance briefly and quietly as Neil Gorsuch wrote in his decision. That is a lie. After each game, he would invite his team to the 50-yard line to bow in a circle while he led them in Christian prayer while raising the team helmet up high. Many might hear that and wonder what is wrong. Let's start with the coercion factor. If you are an impressionable high school kid on a football team and one of your coaches says take a knee, you feel compelled to take that knee and repeat after him. Don't agree? Justice Brett Kavanaugh did as he refused to sign onto that part of the decision, although agreeing overall. Secondly this is not about free speech. As a Christian, there is nothing to prevent Kennedy from actually praying in silence, by himself. There is nothing extra spiritual about praying on the fifty yard line or lifting a football helmet up as an iconic modern day golden calf. Can you imagine this scene playing out in almost any other employment setting? You start a habit of praying out loud and compel others to join you. Others who do not share your faith. Others who may even be atheist. You do not care because the only thing that matters is your right to pray. Your company warns you over and over to stop but you just thumb your nose at them and carry on until they suspend you. In retaliation you sue them all the way to the Supreme Court. Are you kidding me? Here is the plain truth. If this occurred at any private employer the court would have been 9-0 against Kennedy but because it was the big bad boogeyman known as the public-school system, the court ruled for him. In doing so, they also ruled against anyone who does not share our faith.

'The court pointed out that teachers and students alike still maintain their freedom of speech, even if they're working at a state-funded school. "When it comes to Mr. Kennedy's free speech claim, our precedents remind us that the First Amendment's protections extend to 'teachers and students,' neither of whom 'shed their constitutional rights to freedom of speech or expression at the schoolhouse gate,'" the majority opinion stated. Justice Neil Gorsuch wrote for the majority, "The Constitution and the best of our traditions counsel mutual respect and tolerance, not censorship and suppression, for religious and nonreligious views alike."' - CBN News

This is not about free speech. This is about forcing others to speak what you believe. It does nothing to further the cause of Christ either. The myopic part is found in Gorsuch's commentary on mutual respect and tolerance. What he is actually saying is that everyone must have respect and tolerance for Christianity but that is not how this ruling will read decades from now. Christians live in this fantasy world where they never consider that one day, they may not be the dominant religion on the playing field. Islam is vastly outpacing Christianity in terms of growth on the world stage. It may take several decades but imagine an America without the baby boomer generation, which one day will depart from this earth. The generations that follow decidedly do not like the Christianity sold to them by the apostate church system but they have learned from it that they can make it up as they go along too. When you spend forty years self-victimizing the church into this whiny cabal of dominionists demanding your kids pray Christian prayers on the 50-yard line after games, what happens when it is not Christianity making those demands? Sure, the new religious zealot court will be around for another 3-4 decades but soon enough they too will leave to stand before Christ. You were able to connive and cheat the system to pack the court this time but probably not the next or if the court expands. So in 25 years, when our kids will have to deal with the mess we will leave them imagine an America where Islam or another religion is the majority. Imagine them demanding your kids, kids pray their prayers. There may be outrage from the new Christian minority but this decision will be the law of the land. After all, the Muslim football coach did not check his first amendment rights at the doors to the state sponsored school, right? Sure you may have what's left of the Liberty Counsel willing to rig a case to get in front of the Supremes but I doubt it will be a nine court panel with five Christian ideologues this time around and in a fair fight, specious arguments lose.

'The court declared a victory for Coach Kenney's constitutional rights and admonished the local government for trying to punish him for his religious expression: "Respect for religious expressions is indispensable to life in a free and diverse Republic"whether those expressions take place in a sanctuary or on a field, and whether they manifest through the spoken word or a bowed head. "Here, a government entity sought to punish an individual for engaging in a brief, quiet, personal religious observance doubly protected by the Free Exercise and Free Speech Clauses of the First Amendment. And the only meaningful justification the government offered for its reprisal rested on a mistaken view that it had a duty to ferret out and suppress religious observances even as it allows comparable secular speech. The Constitution neither mandates nor tolerates that kind of discrimination."' - CBN News

The local government was not punishing him for expressing his religion but rather trying to protect kids from being forced by him to express his religious beliefs. The only discrimination here was being carried out by Kennedy. Was he allowing Muslim students to pray in his little circle to Allah? I imagine not. More importantly, to what end was all of this? What was won for the kingdom? Absolutely nothing. What changed in the eternal? Absolutely nothing. Did we follow the admonition found in the key verses today? Did we redeem the time or walk circumspectly? No. This faux-Christian outrage machine is designed to create victims in the church, sitting offended in pews, and extending their judgmental fingers at the very people who need the gospel the most and blaming them for everything wrong with the world. It has created this spiritual malaise where dominionist myopia infects those claiming the mantle of Christ until they only see their offense. We can't pray on the fifty-yard line?? Quick! Call the Liberty Counsel! They have removed the manger scene from the town square! Oh the blasphemy! They are forcing bakers to bake cakes? Hurry! To the Offense-Mobile! Meanwhile the enemy is laughing as he watches the apostate church chase its tail around, stamp its feet and play the victim. Meanwhile, no one gets the gospel anymore. Keep taking your victory lap. See you in a couple decades.