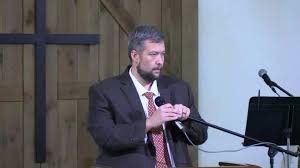 Where there is smoke there is usually a raging fire. The fire this time is emanating from JD Hall from Protestia. For the uniformed, Protestia used to be called Pulpit and Pen, which switched to Protestia when P and P was banned from Facebook. The ban was generated by Hall publishing a picture of a dead immigrant and his child, after trying to cross the border. The picture was bad enough but the caption blamed the father for trying to enter a sovereign nation illegally because you know, Jesus? In full disclosure, I once spent a brief time writing some content for Pulpit and Pen and my exchanges with Hall were always pleasant, even when he discovered I did not share his Calvinist false theology. That was enough however for him to politely explain that he could not run my writing, which was fine of course. My exchanges after that with P and P through the years were usually surrounding their extreme political ideology and unfortunately Hall's lackeys were far less polite. One tried to stalk my profile and had to be put in his place unfortunately. So, while I have no love lost for Protestia, which remains a political organization with some Christian dressing, I do not wish ill on anyone. So, I do hope that whatever trouble JD has found himself in he can repent of and work on restoring his walk.

Of course, I have no idea what occurred because the people who protect JD Hall for a living are not saying. They were forced to have to finally break with him because what was known publicly was damning enough. Just last month he was arrested for a DUI while carrying a concealed weapon. Now now, before we get all "judgy" I am sure we all remember the time Jesus had a little too much wine while packing His Glock under his robe. No? Me neither. Around the same time in May, Hall settled a libel case for $250,000 with someone he had defamed in one of his publications. Embarrassingly, Hall was forced to not only retract but admit that he had literally made up the entire story and apologize. Because, you know, who would Jesus lie about?

These stories encapsulate the core problem over at Protestia in that they confuse the absolute truth of God with their ability to act absolutely however they wish, as long as they believe they are in the right. In other words, their behavior is never considered separate from what the issue at hand might be. For example, Hall tried to resign from his Montana church after these revelations but his church openly refused his resignation by claiming they knew the truth, he had nothing to be ashamed of, and they do not care what the world thinks. Did you get that? Due to legal proceedings, Hall was forced to admit that he lied and completely fabricated a story about someone but his church not only thinks that is cool, but refuses his resignation. The same church in response to his arrest publicly claimed that Hall suffers from a vitamin deficiency that replicates being drunk. Uh-huh. Hall told his church to be ready for what "the enemies of Christ" will do with his situation.

Please, enough, stop. It is not the enemies of Christ JD. You spent your ministry tearing down any dissent and yeah, some might come back now that there is blood in the water but this is not about them. It is about you. You are the one who allegedly drove drunk while carrying a concealed weapon. You are the one who concocted a story about someone to defame them. The enemies of Christ had nothing to do with these things. You did. The worst thing though is we do not even know the worst of it. Here is a portion from the Protestia statement:

"While the church's decision to accept JD's resignation from pastoral ministry leaves us no choice but to consider the allegations against him to be credible, we are unable to determine their truth with certainty and therefore cannot speak to all of the specifics of the accusations lest we be guilty of gossip." - Protestia

Spare us your sudden concern with gossip. When JD admitted his gossiping about an activist was entirely fabricated you put out a statement siding with JD and blaming how busy he has been all these years in his service for the Lord. Once again spare us. You know what happened or at least his church does. Stop pretending you are inseparable on one hand and so independent on the other. No one is buying it. Keep hiding it and God will eventually bring it all to light and then you too will be exposed.

Listen beloved, none of this gives me any pleasure. Like I said, I pray JD repents and seeks to restore his walk. Not his ministry as that should be over. He is disqualified just based on the two incidents we know about let alone whatever happened to make his church finally say enough is enough. I see plenty of smoke here and when you spend your ministry life taking a wrecking ball to anyone with the temerity to disagree, as P and P were fond of bragging about, do not be surprised if people come out to say goodbye. It is a shame really because a lot of what P and P engaged in was correct theologically even if they had no humility in how they wielded their sledgehammer. Their true flaw is the same that affects much of the apostate church today - dominionism. Quite frankly, their message was always blurred by their incessant politics and their obnoxious, arrogant method of delivery. Perhaps they can all take some solace in knowing that this was all predestined. Well, probably not.